Double Sun Rings In Beijing's Sky On May 30 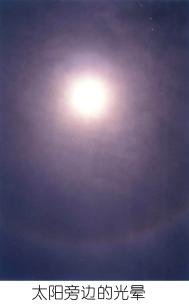 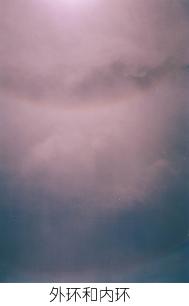 [Minghui Net] In the early morning of May 30, Beijing Dafa practitioners, along with all practitioners around the world, launched a second round of "sending forth righteous thoughts." The sky in Beijing, which has always been dusky in recent years, turned into a clear and crystal light blue that morning. Around noon, the entire sky was covered with a light layer of clouds. Then we were pleasantly surprised when we saw two huge rainbow light rings centered around the sun. One could see them with the naked eye. It was extremely similar to what was described in another Minghui article, "Double Sun Rings in Lhasa's Sky," according to Lhasa wire, May 1, on Xinhua Net.

Both light rings had red inside and progressed in color as rainbows do. The inner ring was perfectly round. The color of the sky inside the inner ring was darker. The lower part of the outer ring was distinct. The upper part faded until the top disappeared into the sky. Between this incomplete outer ring and the complete inner ring, the color of the sky gradually and evenly turned lighter from the outer one to the inner one. The distance between the two rings was about equal to the distance between the inner ring and the sun. The ratio was the same as that of the inner and outer circles in the Falun emblem. Taking the diameter of the outer ring, the entire halo area was about one-fifth of the whole sky. And the sun in the center was extraordinarily bright. It was quite a magnificent view.

Besides this, practitioners whose celestial eyes had opened saw many beautiful and exquisite scenes.

We found a simple camera in a hurry and captured the touching scene. The sunlight was too strong for the picture to show the real color of the sky, but we can at least share the beautiful light rings with practitioners around the world. After we developed the film, we found there was a small rainbow next to the sun, which we couldn't see with our naked eyes because of the strong sunlight. (see photo)

Around 3pm, the light rings gradually faded. Soft and beautiful white clouds floated in the blue sky. They floated high and far away, like the Beijing autumn sky of our childhood.

“Leaving Attachments Behind, Follow Teacher Home in an Unweighted Boat ”