"My Journey of Safeguarding Falun Dafa" 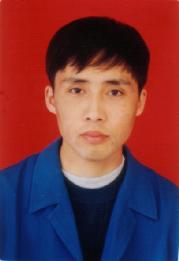 [Editor's note: Ren Pengwu, male, 32 years old, was an employee of the Third Power Plant of Haerbing City, Heilongjiang Province. Ren was a righteous person and a hard worker. His employer gave him the "Honorable Employee" award many times. He started practicing Falun Dafa in 1996. On February 16, 2001, he was reported to police by some informers and was arrested while distributing fliers that clarified the truth about Falun Dafa. Ren was brutally beaten and inhumanly tortured by police from the Public Security Bureau of Hulan County. Ren died from this persecution early in the morning of February 21, 2001. This article was extracted from a draft of his incomplete cultivation story, "My Journey of Safeguarding Falun Dafa," which has been widely circulated in Hulan County.]

The first time that I went to Beijing to appeal, I wanted to restore the reputation of my Teacher and seek justice for Falun Dafa. In February of 2000, my employer detained me in the Employee's Sanatorium to prevent me from going to Beijing to appeal. During the detention period, I was under a lot of pressure, as my boss was trying to coerce and bribe me, and my family members misunderstood me and complained. I was able to clarify the true facts about Falun Dafa to them by relaying my personal experiences, and by revealing the truth of the evil persecution of Falun Dafa. I spoke with compassion to my family members and tried to awaken each of their consciences. At that time, I figured that no external pressure should restrict my determination to seek justice for Falun Dafa, so I began trying to escape.

On the seventh day in detention, I was presented with an opportunity to get out. It was snowing and the cold wind chilled me to the bone. Wearing light shoes, I crossed the Songhuajiang River, which has a temperature that is typically well below zero in the winter, walked over 20 kilometers (12.4 miles), and arrived at the railway station of Haerbin City. While I sat on the train to Beijing, I had a feeling in my heart that I could not express in words. My heart was calling out loudly, "Teacher, here I come!" After I arrived in Beijing, I could not find the Central Appealing Office, since the sign on the Appealing Office had been moved. So, I went directly to Tiananmen Square. As soon as I reached Tiananmen Square, I was interrogated by a police officer. After they found out I was a Falun Dafa practitioner and that I wanted to appeal, the police forcibly threw me into a police van and did not allow me to speak. I was taken to an alley and pushed into a big iron cage, where I met Falun Dafa practitioners from all over the country. We pressed our hands together.

The police recorded our names and addresses, and soon after, they sent me to the Heilongjiang Province Office in Beijing. After being detained in Beijing for three days, I was sent back to Haerbin and detained in the Daowai District Detention Center for fifteen days. When I was released, my employer punished me by expelling me from the power plant, but kept my name in the ledger so I could work for them again after two years.

Validating Falun Dafa in Beijing for the Second Time

On November 11 of 2000, I went to Beijing again to validate Dafa and clarify the truth to the people. I headed for Tiananmen directly and arrived at around eleven o&#039clock in the morning. Facing the Monument to the People's Heroes, I unfurled a banner stating, "Falun Dafa is the Truth of the Universe. Restore the Reputation of My Teacher." At that moment my mind was empty of thoughts. Two people (a policeman and a plainclothes officer) raced up to me as I started shouting, "Falun Dafa is good!" Two female practitioners unfurled their banners about forty feet away from me, and they were followed by some other Dafa practitioners holding up banners.

I will never forget that scene, which shook the heavens and the earth with awe-inspiring righteousness. The police rushed here and there to arrest and beat the practitioners. I was pushed into a police van that already held more than ten practitioners. This time, I was again detained in an iron cage. This iron cage had two levels. Practitioners who had told their names and addresses were detained in the upper level that was above the ground, while those who had refused to speak were detained underground. It was noontime and the cage was full of Dafa practitioners. Practitioners greeted me with applause when I entered. I was not frightened, because I could see their kind faces and feel the atmosphere of benevolence. We recited "Lun Yu" and Teacher's "Grand Poem," studied the Fa, and shared experiences. The police attempted to interfere with us but failed to do so in the face of our awe-inspiring righteousness. The small basement became the venue for over one hundred practitioners who were rectifying the Fa.