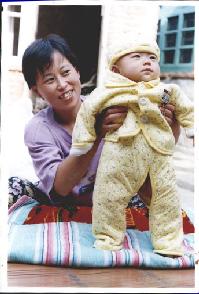 Ms. Wang Lixuan, age 27, was a Falun Dafa practitioner from Nangou Village, Qixiasikou Town of Shangdong Province. Her son, Meng Hao, was less than 8 months old. Since July 20, 1999, Lixuan went to Beijing to safeguard Dafa 8 times (She went to Beijing to appeal 3 times when she was pregnant and twice together with her son). On October 21, 2000, she was arrested on her way to Beijing. When she later ran away from the detention center, she went to Beijing again to validate Dafa on October 22. On November 7, 2000, Lixuan and her son were persecuted to death. When her family received the death notice and arrived in Beijing, they found the frozen corpses of Lixuan and her son. According to the coroner's exam: her neck and knucklebones were broken, her skull was sunken and there was a needle stuck in her waist. There were two deep bruises on her son's ankles. There were two black and blue spots on his head and there was blood in his nose. It was deduced that the bruises may have been caused when the thugs handcuffed little Meng Hao's [a less than 8 month old baby] ankles and hung him upside down. The criminal gangsters of Jiang Zemin don't even spare babies!!!!

Mr. Wang Guihai, the father of Lixuan, 53, is also a Falun Dafa practitioner. Around 10 pm on November 2, 2000, several policemen climbed over his wall and broke into their house to confiscate his home and to disconnect his phone. Mr. Wang was sent by force to the Wangcun Labor Camp in Zibuo City for re-education.

Ms. Li Xiuxiang, the mother of Lixuan, 51 years old, is a Falun Dafa practitioner. She was arrested many times when she went to Beijing to appeal.

Ms. Wang Lihui, the sister of Lixuan, 23, is a student of Yangtai University. She was dismissed from school because she appealed for Falun Gong and was unlawfully sent to the Wangcun Labor Camp for re-education.

Mr. Wang Xuchao, the brother of Lixuan, 21, is a student of Jinan Architecture University. He was dismissed from school because he went to appeal for Falun Gong.

“More About the Torture of Dafa Practitioners in Wuhan City, Hubei Province”