April 25 Peaceful Appeal at the Chinese Embassy in Belgium 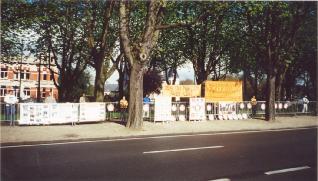 [Minghui Net] In the afternoon of April 25, Dafa practitioners in Belgium gathered in front of the Chinese Embassy to commemorate a glorious page in human history. Two years ago on this day, more than 10,000 practitioners conducted a peaceful appeal for Falun Dafa outside Zhongnanhai Compound, Beijing, China. Practitioners took great care in decorating the site for this event. To support this activity, a few practitioners quickly made two panels of photos in remembrance of over 190 practitioners who have died due to tortures initiated by Jiang Zemin, and carried out by his vicious clan. Dafa practitioners from other countries joined Belgium practitioners on this special day. Facing the embassy, we displayed the banners and posters that contained the introduction of Dafa, and the truth of the persecution.

The weather on this day is worth mentioning. When we arrived at the embassy after 4 pm, it started to rain. The rain got heavier, and the wind blew, but everyone stayed focused. We had only righteous thoughts, and proceeded with the decorations as we had planned. When we were almost done, the rain suddenly stopped, and it became a nice day. In the powerful music, we began the event with a group practice. The entire scene was solemn and serene.

The police officers there to maintain order were also touched. They had never seen such a peaceful and kind "demonstration." Some of them watched us practicing; some read our introduction on Dafa and the persecution. They and passersby all happily accepted Dafa information. A police officer in charge of traffic gave us a "gift" shortly after we arrived -- it was a clover. He explained, "Normally this kind of flower only has 3 leaves. It is rare to see it with 4 leaves." He said he discovered the 4-leaf clover here and said, "You will definitely have good luck." He said that he supported us and hoped people around the world could all enjoy the human rights that they were entitled to. We genuinely felt happy for him to be able to encounter Dafa. During the breaks, practitioners didn't forget about others. They sent the police officers water and snacks.

During the event, some reporters from Chinese newspapers came by and inquired about the event. Practitioners kindly explained to them the real situation in China. We also told them the principle of "the good and evil reaping what each justly deserves." In addition, we said: we are not against the government and all hope that China becomes a better country. We came here to express our kind wishes and ask for an end to the persecution against Falun Gong. We also solemnly informed the embassy staff: for the sake of your future and your relatives, please immediately stop slandering Dafa. Preserve your righteous thoughts and conscience. Your work cannot be used as an excuse to persecute Dafa.

During the entire process everyone sensed the power of righteous thoughts.

As it became darker, everyone sat quietly and began the candlelight vigil. There was one candle in front of everyone. Contrasting with the darkness in the background, the candle light in front of the photos and the flowers stood out brilliantly. It was very quiet; only the Dafa music of "Pudu" and "Jishi" were playing. The atmosphere was serious and solemn.

When time for the event was up, nobody felt like leaving. A female police officer said, "This is so nice." After the activities were finished, we helped the police collect the barricades. Through this event, practitioners all felt they had improved and experienced the power of Dafa.