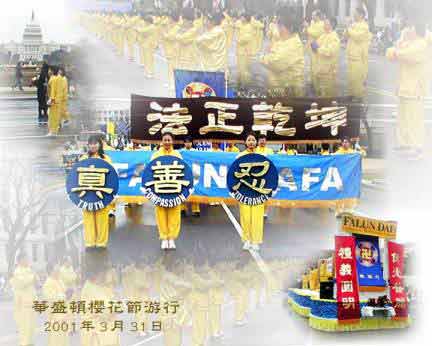 [Minghui Net] More than 180 Falun Gong practitioners from New York, Philadelphia, New Jersey, North Carolina, Washington D.C, Virginia and Maryland participated in the Oriental Cherry Day parade on March 31, 2001, in Washington D.C. At 8 am, several thousand people from 60-70 different groups gathered on the grassy field in front of Capitol Hill. Falun Gong practitioners prepared a float and numerous eye-catching banners that read, "Falun Dafa," "Fa Rectify the Universe," "The Buddha-light illuminates everywhere and rectifies all abnormalities" (translated from Chinese) and so on. It was raining that morning, and some of the practitioners guessed that there might not be many people coming to watch the parade. However, the rain diminished when practitioners gradually spread out and opened their banners and by the time the parade started, the rain had stopped completely. The parade ran from 7th to 17th street along Constitution Boulevard. Accompanied by the beautiful exercise music, Falun Gong practitioners demonstrated the smooth and harmonic exercises to thousands of applauding onlookers. Interestingly, three policemen on duty also tried to follow along with the exercises. The parade ended at around noon. Afterwards, practitioners scattered to different places around the Capital to Hongfa (spread Falun Dafa), demonstrate the exercises, share ideas, distribute truth-telling materials, and so on. The next day, many practitioners also participated in the large-scale group exercise held monthly in Washington D.C. ?

“Legends for People of the Future”