[Minghui Net] After the Tiananmen Square self-immolation incident, the detailed analyses of the CCTV video footage done by the German Falun Info Center drew great attention from the German media. More and more news media personnel hope to establish direct contact with Dafa (great law and universal principle) practitioners in order to know the truth of the incident and Falun Dafa. Jiang Zemin's endeavor ended up as a blunder. This mistake will never help to achieve his goal, but lets the world more clearly understand his evil nature and its harmfulness to human society and global peace.

Recently, one major German radio station learned that the Falun Info Center would hold a press conference. However, they could not attend the conference due to the short notice, they thus called directly to the conference center and wanted to interview Falun Dafa practitioners. The next day, two practitioners were invited to the station for an interview. The host asked many questions that were interesting to the audience and it seemed that they were satisfied with the answers from the practitioners. The host specially announced that one German World View Study Center concluded that Falun Dafa is not an evil cult. The radio station broadcast the interview that day. 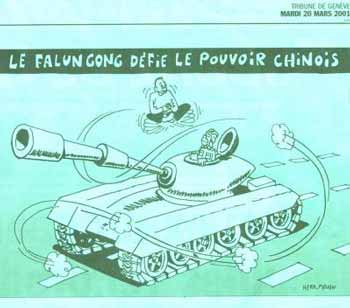 “Spread Dafa And Save People With Compassion”

“Studying As One Body”