BBC News Online: Sun Unleashes the Big One Super Solar Flare "Staring" Away from The Earth 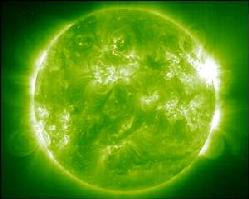 As predicted by scientists, "the Sun has unleashed one of the largest flares on record - but fortunately, astronomers say, the Earth is not in the line of fire."

The gigantic flare, a titanic explosion just above the solar surface, "occurred near the Sun's north-west limb in the region of the giant sunspot group Noaa 9393 that has been such a dramatic sight in the past week."

. "Noaa 9393 is being carried out of sight by the Sun's rotation. This means that the vast cloud of charged particles the flare threw into space will not collide with the Earth causing auroral light shows and radio blackouts."

The flare was classified as a major event and was more powerful than the one in March 1989 that shut down a Canadian electrical power grid causing six million people to lose power for nine hours.

"The flare was the most powerful since regular X-ray data from the Sun became available in 1976."

When the flare occurred, the sky emerged some fantastic red and green aurora. 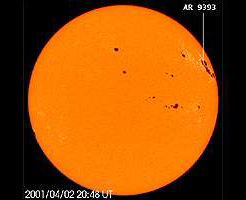 "The large sunspot group is disappearing from view

The active region Noaa 9393, which covers an area more than 13 times the size of Earth, is no longer in line with our planet, so most of the flare's energy was directed away from us." If the flare had happened last weekend while Noaa 9393 was still aimed towards Earth, it would have caused a complete different consequence.

"We are perhaps lucky that this event didn't occur over the weekend, when the resulting charged gas cloud would almost certainly have been aimed towards Earth," said Dr. Paal Brekke, project scientist for the Solar and Heliospheric Observatory (Soho), one of a fleet of spacecraft monitoring solar activity.

"However, radiation from the flare did temporarily disrupt radio communications. A storm of protons 10,000 times greater than usual was created and this swept past the Earth.

There was no danger to airline passengers from this radiation, although sensitive electronic equipment in space might have been affected."

The flare was the most powerful since regular X-ray data from the Sun became available in 1976.

It was more powerful that the famous 6 March, 1989, flare which was related to the disruption of the power grids in Canada."

"Solar flares are among the Solar System's mightiest eruptions and are capable of releasing as much energy as a billion megatons of TNT."

"Flares are caused by the sudden release of magnetic energy. They can accelerate solar particles to very high velocities, almost to the speed of light, in just a few seconds. The flares also heat solar material to tens of millions of degrees." 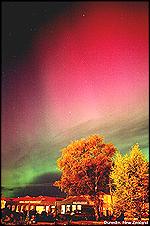 We have already been treated to some fantastic auroras (Image courtesy of Chris Petrich).