A Message from a Pediatric Surgeon to the People's Daily Newspaper 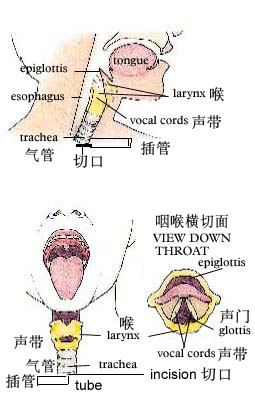 "Siying wanted to talk, but because the doctors had to cut open her trachea and insert a tracheal tube, she struggled to speak. However, her voice was clearly audible" (quoted from the article "Please Save Me - the Heartbreaking Ordeal of a 12-year-old Child", which appeared on page 2 of the January 31st, 2001 edition of the People's Daily Newspaper).

I felt extremely sad after I finished reading this article. Because I used to be a pediatric surgeon, out of professional habits, I read through the article carefully, wanting to find out how gravely injured the poor little girl was. I started to feel worse and worse as I examined the account, because I could tell that the reporters from the Xinhua News Agency who wrote the articles were lying. I am not a Falun Gong practitioner; I just want the truth to come out. I do not appreciate being treated like a fool by the People's Daily Newspaper.

The goal of tracheostomy (see the attached pictures) is to maintain the function of a patient's airways. Usually doctors perform such an operation on a child only if some foreign objects have caused an obstruction of the upper airway. Siying had such an operation most likely because of her burns, which affected the airway, and the edema of the airway, that caused breathing difficulties. Her injuries were extremely severe, which means that she would need continual intensive medical care even after the insertion of a tracheal tube. The edematous airway would secrete a great amount of fluid, which would require constant suction by the nursing staff. There is no way that the patient would be able to clear it out on her own. The fact that Siying was only 12 years old and also suffered from serious burns means that she would need even more medical attention than an adult patient would. Under these conditions, conducting an interview with her would not only be inhumane, but almost impossible.

In order to insert a tracheal tube, doctors will usually make an incision between the 3rd and 4th tracheal rings, which are located well below the vocal chords, so that the tracheal tube will be able to bypass the swollen larynx. After such an operation, it takes an otherwise healthy adult several days before he could get accustomed to breathing with a tracheal tube. In the first few days, it would be very difficult for the patient to make any sound at all. In some cases, if the tracheal tube could bring a little air to the vocal chord, then the patient might be able to cover the tube with a finger and try to speak (see pictures 1 and 2). It is inconceivable that a 12-year-old child who had suffered from burns that required extensive skin grafting, and with a tracheal tube inserted to bypass her swollen larynx, could not only talk to the reporter but sing a song a mere four days after her injuries.

I&#039d like to offer a suggestion to the staff of the People's Daily Newspaper. In the future, if you want to make up lies that require specific knowledge in professional fields, please ask the experts to review your writing before publishing it. This way, people won't be able to tell that the official mouthpiece of such a big country is lying, which will undoubtedly damage the image and reputation of the entire country.

“Jiang Zemin's Orders: "You Are Free to Beat Falun Gong Practitioners to Death"”

“A Suspicious Case of Self-immolation: How Jiang Zemin Shot Himself in the Foot”