On November 26, 2001, the legislature of Sayreville City, New Jersey held a meeting in city hall and unanimously passed a resolution supporting Falun Gong and urging Jiang Zemin's government to cease the persecution against Falun Gong practitioners and dismiss the "610" Office (an agency specifically created to persecute Falun Gong, with absolute power over each level of administration in the Party and all other political and judiciary systems) throughout China. The resolution decided that a certified copy of this resolution was forwarded to honorable Kofi Annan, Secretary-General of the United Nations, President Bush, five other US senior officials, Chinese President, Jiang Zemin, and 8 other senior Chinese officials.

The Mayor O'Brien made an exception in the legislature's conference by reading the resolution himself. It was the only resolution being read in the meeting among dozens of resolutions. Two Falun Gong practitioners gave speeches expressing appreciation for the persistent support from Sayreville City. In the last legislature meeting, the mayor said after reading the Falun Gong truth-clarifying literature that, "In China, the persecution against Falun Gong is occurring. I am tracking related reports from Wall Street Journal and other major media. We are now fighting against terrorism in the Middle East. However, terrorism is not only in the Middle East. We will make a resolution at the next meeting." About a year ago, when Sayreville City issued proclamation for "Falun Dafa Day and Li Hongzhi Day", the mayor invited Falun Dafa practitioners to demonstrate the exercise at the legislature conference and said in a dignified tone, "In this country, Falun Dafa practitioners can practice in the legislature. But on the other side of the Earth, one will be arrested and imprisoned even if he practices in a park." 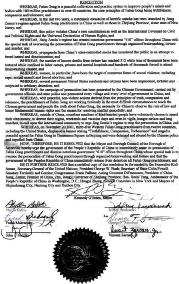