James R. Matarazzo, Mayor of the Borough of North Caldwell, New Jersey issued a proclamation on December 11, 2001. In the proclamation, he said, "Join those voices that are in full support of those who follow the peaceful example of 'Falun Gong' members, and I oppose the reported harsh and brutal attacks against the faithful followers of 'Falun Gong'." 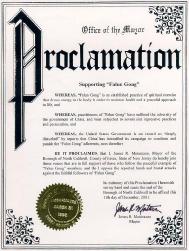 “Clarifying the True Facts of Falun Dafa in Chinatown in Vancouver, Canada”