The city of Jena is located in East Germany, and is the hometown of a German practitioner. An accidental chance fulfilled his wish to introduce Falun Dafa in his hometown.

On October 1, 2001 we got a call from a practitioner. A women's center in Jena invited us to give a seminar on Falun Dafa. It was a part of the culture festival of the city. We had less than half an hour to prepare the seminar and get there. I had not done any Dafa related seminar before, but at that moment, only one thought was on my mind: Let more people know the truth of Falun Dafa and the truth of the persecution of Falun Gong practitioners in China.

One German practitioner and I packed some necessary materials and started off. It is over 200 kilometers between Dresden and Jena. When we got there, we were about two hours late. Only three people were still waiting for us. We introduced Falun Gong and the current situation about the persecution of Falun Gong in China. Then we taught them Falun Gong exercises.

Later, with help from the biggest local newspaper in Jena, Allgemein Anzeiger, we used a half page to advertise the painting exhibition of Australian practitioner Zhang Cuiying. When we went there again in November, there were already seven practitioners at that site. 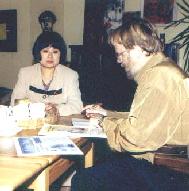 “Austria: Vienna's Citizens Get to Know the Truth of Falun Dafa”