A Canadian Falun Dafa Practitioner: Why I Go To Tiananmen Square

To all Chinese people:

I am going to Tiananmen Square to hold a banner that read Truthfulness-Compassion-Tolerance, Falun Dafa is good with many other western Falun Gong practitioners from around the world. Most of us will sit in meditation while some will hold the banner.

I know Falun Gong is good because I have been practising for three and a half years. Because of practising Falun Gong I have been able to get over drinking, smoking, doing drugs and many other bad habits which only helped to pollute my heart, mind and body. Just before I found Falun Gong I was going to leave my family, friends, and society because I felt hopeless. I was going to go live in a mountain. Instead I began to practice Falun Gong and have been able to transcend all my addictions and begin removing my bad mind for one filled with Truthfulness-Compassion-Tolerance. When my mother saw the changes in me she also began to practice. Her arthritis went away and she began to lose weight [as she was overweight]. She felt a deeper sense of purpose cultivating in Falun Dafa.

Ever since the persecution of Falun Dafa began, I have been on TV, radio, talking with government officials, and travelling around the world to let the truth of Falun Gong be known. Yet I have never come to the main land were this Great Dafa has come from.

Falun Dafa came from your land of China and your beautiful and ever so rich culture. Without it, I would not be who I am today. With the deepest respect I have come to your country to stand up for the truth for you. I hope with my white face and pure heart I can awaken the goodness in your heart. Please don't follow the president and his criminals to persecute Falun Gong -- it is not good for you.

Cultivation is deeply rooted in your culture, however during the revolution much was wiped out. However during that dark time Falun Gong quietly remained in existence. Our great Master brought forth Dafa's dignity to the people of China many years later. The pride you and I feel for your culture has been cultivated over thousands of years and has very little to do with any ruling party of the contemporary world. Falun Dafa embodies much of your ancient history and purest most beautiful culture. Everyone wants the liberation of the people but this comes from within one's heart. Falun Gong teaches that very process. This liberation is called enlightenment. There is no need to order people or pay people to practice cultivation. People want liberation and enlightenment themselves, it's just that not everyone can obtain it.

Something so pure will naturally become popular and naturally get the attention of those in power. But Falun Gong has nothing to do with worldly power, politics, working with the CIA, or anything of that nature. As westerners, our governments, media and people find it quite laughable to hear such rumours. That is why we had to read Chinese propaganda to even hear such rumours. In fact, Falun Gong is being researched by scientists here, and many officials are happy to see people benefit from the practice.

Please don't believe the lies [of the Chinese regime]. Please don't attack Falun Gong. It is something that has been brought during a special period of havoc in our world today. Yet during all of the persecution, why have we not heard of Falun Gong practitioners fighting back? Out of the millions of practitioners, why has not one fought or even swore back? Why has the persecution still not succeeded? It is because Falun Dafa has brought forth the Law of the universe. It is because the practitioners embody the Law of the universe. How can you wipe out Truthfulness-Compassion-Tolerance? In fact you can't, but when it is attacked what you do is a very important issue.

Where can you find noble people in today's China worthy of your past heroes' reputation, like Yue Fei [a Chinese national hero and a great general in the Song Dynasty]? Where can you find people today who will be looked at in the future as part of the dignity of Chinese culture, the oldest and most beautiful culture, the father of all cultures? These people are the practitioners of Falun Gong.

In this present societal (cosmic) climate wherein the Law of the cosmos comes to this world and the world is in chaos, Dafa practitioners are sacrificing everything to bring you the truth. They are becoming the future heroes that will be forever be remembered by the future Chinese culture and the history of the world. I have come to help remind you that you, too, want to be remembered in a positive light. You, too, know that good is rewarded with good and evil with evil. Don't forget that your future depends on it. 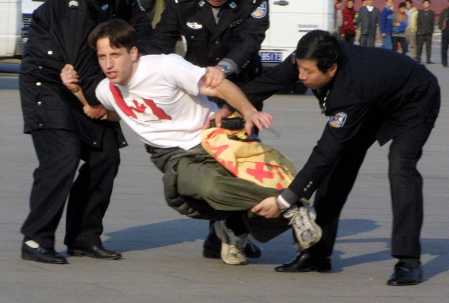 Editor's Note: The western young man in above pictures is the author of this article. In the afternoon of November 20, 2001, he unfurled an banner which read "Falun Dafa is Good" in Tiananmen Square, and spoke in Mandarin to Chinese onlookers, "America knows, the world knows, that Falun Gong is good."