(Clearwisdom.net) According to the Chinese seismological station net, at 5:26 p.m. Beijing time on November 14, 2001, an earthquake of 8.1 magnitude occurred in Kunlun Mountain (36.2 N, 90.9 E), at the border between Xinjiang and Qinghai. The epicenter was located in Ruoqiang County, Xinjiang, which is 400 kilometers (250 miles) away from the Capitol of Ruoqiang County and 350 kilometers (218 miles) away from Golmud City. Based on the preliminary reports, there was shaking in Qinghai, Sichuan, and partial areas of Gansu Provinces. Until 11:00 a.m. on November 15, 2001, the seismic region continuously experienced many aftershocks. Some houses in the main seismic region in Qinghai collapsed. There were many cracks on the Qinghai-Tibet Highway (state highway 109). A big crack appeared on Kunlun Mountain. The railroad from Golmud City to Lhasa City under construction was damaged. It is unclear what the total number of casualties are at this time. 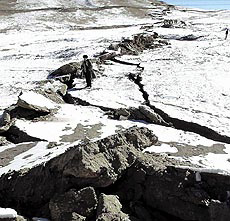 This is one big crack area formed on a ridge of the Kunlun Mountain after the earthquake.

Natural disasters never occur by chance. The crimes that Jiang Zemin's regime committed against Falun Dafa have incurred anger from both humans and gods.

Female team guards checked all female practitioners upon arriving. The practitioners were required to immediately strip after being brought in. Each practitioner was turned over to 2 drug offense criminals for "strict supervision." If practitioners did not comply with the directives, the criminals would punch and kick them. The authorities also incited people to beat and otherwise punish Dafa practitioners. A girl named Fan was stripped of all her clothes because she did not cooperate with the brainwashing orders. The guards tortured her with an electric baton and locked her up for seven days in solitary confinement. They spread rumors that this girl had mental problems and that she attempted to commit suicide. The guards did not allow other practitioners to contact her. Finally they prolonged her detention term by arbitrarily adding another 5 months and ordered 2 drug offense criminals to watch her. The guards stripped another practitioner, Jia, and tortured her with an electric baton as well, because she read and passed on Master's article "Towards Consummation" to other practitioners. Consequently, her detention term was extended for another 3 months.

In June 2001, Master's new article that spread among practitioners frightened the vicious forces. They conducted a so-called "3 month training" for all practitioners who were recently detained. The daily "training" lasted over 10 hours. Due to the extremely hot weather, the guards didn't dare to come out of their offices to deal with practitioners, but instead ordered the drug offense criminals to take turns torturing Dafa practitioners. On a daily basis, Dafa practitioners were only allowed one meal, lunch, and were not allowed to drink any water. They would not even make an exception for the elderly lady who was in her 60s. The practitioners who could not walk anymore had to stay outside, to suffer in these hot temperatures. Since she was too tired to walk, practitioner Zhang sat down for a moment. For that infringement the police ordered drug offense criminals to beat her and then locked her up separately for 7 days. In addition, they added another 3 months to her detention term. Practitioner Miao could not walk anymore because her legs were swollen. The thugs punished her separately for not walking by beating her with an electric baton, simply because she sat down for a short while to rest. Practitioners had to have their meals in a square outlined by the guards on the field, regardless of whether it was rainy or windy.

In the male team, when practitioner He Wanji's mother and his son came to visit him, the guards arranged the visit in a meeting room installed with a hidden camera and microphone. The guards secretly videotaped their conversations. As a result, his mother, who was in her 70s, was arrested and illegally detained for 29 days. She was also fined 100 Yuan. His young son was detained for 4 days and fined 1,500 Yuan (This amounts to three months income for an average city worker in China). He had been locked up 7 days and forced to write the "repentance statement" [A statement declaring that he will give up his practice of Falun Dafa and will obey Jiang Zemin's political ideology from now on]. His detention term was prolonged by 3 months.

Practitioner Tang, a teacher in a middle school in Xining City, was illegally sent to a labor camp due to appealing for Falun Dafa in Beijing. While in the labor camp, he was enlightened to the fact that cultivation practice is very serious. He became aware that a practitioner could not denounce Dafa on the surface, and in one's heart still want to cultivate. Doing it this way is not the behavior of a Dafa practitioner. Dafa practitioners should always take the Fa as the teacher. He said, "No matter how the guards would treat me, I will cultivate to the end." His firm, righteous thoughts shocked the vicious forces. They transferred him to a "strictly supervised" team. Then he was transferred again to a "strictly disciplined class" and was watched by 12 drug offense criminals. Now he has still not been released, even though his detention term has expired.

The above are just some of the records of persecution against local Dafa practitioners.

Supervisor of No.2 Team: Yang Yong

The head of the Law and Politics Section of Xining City Police Station, Hu Jianguo

“Moscow: Accounts of the Exhibition of Zhang Cuiying's Paintings ”