Whereas, many of the dedicated practitioners of Falun Gong have now joined in a "Global Rescue Walk" across the breadth of the United States, from Washington D.C., through the state of Arkansas and on to Los Angeles; and,

Whereas, those participating in the "Global Rescue Walk" do so in an effort to raise public awareness of Falun Gong and its principles of "Truthfulness, Compassion and Tolerance" but, more importantly, to publicly decry the persecution in China of those who practice this peaceful art of mind and body; and,

Whereas, Falun Gong, introduced in China in 1992, has since been banned, books and tapes about the practice have been destroyed, and millions of its practitioners have been beaten, arrested and killed in a vicious and senseless crackdown on human rights; and,

Whereas, the House of Representatives of the Eighty-third General Assembly of the state of Arkansas wishes the practitioners of Falun Gong the very best during their "Global Rescue Walk" and stands with them in their quest for "Truthfulness, Compassion and Tolerance."

Now therefore, pursuant to the motion of

The House of Representatives directs that this Citation be presented on this 9th Day of November, 2001.

Speaker of the House 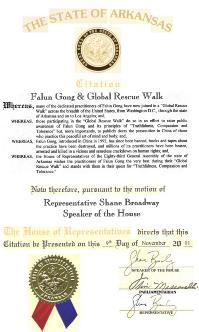