We didn't mind the wet lawn at all and still began to play the music and practice as usual. We were unaware that the volume of water from the sprinklers was being gradually increased. When we realized it, our sitting cushions and posters had been drenched. However, we did not mind and continued to practice. A little water like this is nothing to us. We still come here to appeal even in a heavy rain. As long as China does not stop persecuting Falun Gong, our peaceful appeal will continue.

One of our practitioners pulled out his camera and took pictures of this scene. An Embassy employee saw the practitioner taking pictures. After a while, the volume of water was noticeably reduced. 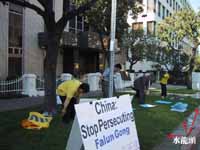 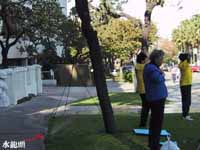 “Spreading the Fa on Christmas day in Sydney”