Photo Report: The Light Shielded above an Ireland Practitioner During Practice 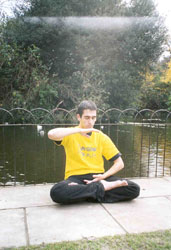 This photo was taken on January 11, 2001 while an Ireland practitioner was practicing in a park. Please note the shield of white light above his head. Just as Master Li described in Zhuan Falun: the practice site will be shielded with a big Falun. The photo is also very similar to that taken in Taiwan except that the color is different.