[Beijing] Suffocate the Evil at Tiananmen Square on December 23

Before dawn on December 23, 2000, an elderly female practitioner unfurled a banner on the Golden Water Bridge at Tiananmen Square. She shouted out loudly: "Falun Dafa is good! Falun Dafa is the righteous law!" The righteous voice attracted many people who were watching the National Flag Raising Ceremony. Soon afterwards, a family of three Dafa practitioners in the crowd stepped forward. The father carrying the baby shouted: "Falun Dafa is good!" The policemen covered his mouth and dragged the three of them into a police car. When they were in the car, the father again opened the window and shouted to the travelers: "Falun Dafa is not XX [slanderous words omitted], please keep your mind clear!" His voice actually moved several travelers around into tears. The policeman drove the car away in a panic. From the ceremony to noon, Falun Dafa banners were unfurled one after another and the voice of "Falun Dafa is good!" reverberated in Tiananmen Square.

. At 9:05am, a 30 year old male practitioner was arrested when he unfurled the banner

. At 10:43am, three female practitioners unfurled a banner and shouted loudly: "Falun Dafa is good!" at north Tiananmen Square

In Tiananmen Square, there was an 80 year old practitioner standing up, leaning on her cane. She was supported by a 50 years old practitioner's hands (probably her daughter) and they shouted: "Give back Teacher Li's good name!" A group of plain-clothes policemen surrounded them and tried to push them into the police car. The practitioners did not want to be taken away by the evil, so they tried to reason with the policemen. The policemen slapped them on the face several times in front of many tourists at the scene. There were also five to six 60 year-old practitioners raising their hands and shouting loudly: "Falun Dafa is good, Falun Dafa is the righteous law." Several police cars rushed to the Tiananmen Square police substation one after the other, taking practitioners away.

In the Tiananmen Square Police Substation, protecting the Fa reached another climax. Practitioners applauded and welcomed each practitioner who was brought in. They encouraged each other and shouted loudly together: "Falun Dafa is good." Some of the policemen were so frightened that they dared not come close. 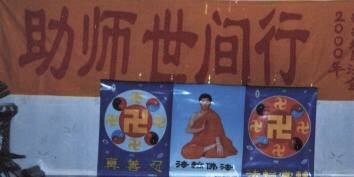 At 11:20am, December 22, 2000, on behalf of all practitioners who had stepped forward in different counties and districts in the city, about 100 Dafa practitioners held a historically significant conference. Everyone who attended the meeting did Heshi [greeting gesture] together in front of Master Li's portrait and studied Master's recent scriptures together. Later, practitioners gave speeches and exchanged the experiences of spreading and distributing Dafa truth materials under current circumstances. The topics also included how to expose and suffocate the evil as well as how to melt oneself into the cultivation. The practitioners from one county distributed the truth-clarifying materials to almost all booths at the local market. One practitioner distributed the materials at the gate of a school and the students raced each other to get a copy from him; one of the kind-hearted students even helped the practitioner to distribute the materials. Some practitioners sold their crops (grains and wheat) to buy printing equipment. One practitioner contributed several one hundred thousand Yuan [100,000 Yuan is about US $1,200 ] by himself for printing truth materials. The conference was completed at 3:00pm. All practitioners left safely. They also safely took away 70,000 copies of Dafa truth materials that had just been printed.

On the same day, from 7:00pm to 7:00am next morning, several practitioners from one county and this city hung many yellow-and-red-colored "Falun Dafa is Good" banners all over the area, including the major intersections, entrances to the parks, across the street from the police stations, traffic watching stands, bridges over highways, squares, entrances of supermarkets, bus stations, entrances of factories and even the entrances of highways in suburban areas. The largest banner was 31 feet long, which was hung from the top of the bridge over the highway. It made a magnificent spectacle. At the same time, several other practitioners distributed the materials, and some practitioners painted the large characters of "Falun Dafa is Good" at the major streets.

These great undertakings happened right before the New Year. Although the police strengthened the patrol, they could not find anyone to arrest or take away.

Recently, a great number of Dafa practitioners from a province in the northwest area of China went to Beijing, one after another, to tell the truth of Dafa and validate Dafa. In some of the areas, almost everyone came out. Some of them had gone to Beijing previously, several times; some of them were coming out for the first time. Some of them were old; some of them were less than 10 years old. There were families with babies going to Beijing. There was a new practitioner who had obtained the Fa for only a little over 10 days and already had read Zhuan Falun three times, straight through. After serious thinking and making a careful choice, he determinedly put everything in his everyday life behind and went to Beijing to validate Dafa. When he left home and went on the train heading to Beijing, he enlightened to the importance of returning to one's true self and the greatness of safeguarding the truth of the universe. Now he is validating Dafa in Beijing and clarifying the truth to people and fulfilling his original vows.

Practitioners from a city in a southwestern region clarified the truth by voluntarily distributing 2,000 floppy disk copies of Dafa truth to university campuses and computer stores in the metropolitan area. After a period of trials and tribulations, most of the practitioners broke out of their human shells and deeply understood the mighty power of Buddha Law and the immense benevolence and compassion of our Master. Practitioners voluntarily took the responsibility of clarifying the truth and suffocating the evil. They would face the evil persecution with more confidence. During the recent experience sharing conference, practitioners carefully studied two of Master's latest articles and discussed experiences of their cultivation. They encouraged each other and expressed their determinations that they would not disappoint the Master. They also decided that they would protect Dafa more actively. The activity of distributing the floppy disks was very successful. None of the Dafa practitioners were arrested.

Practitioners in Shenzhen City held a two-day Experience Sharing Meeting. The first day's meeting ran smoothly and successfully. But on the second day, police surrounded the site and detained dozens of practitioners. As of December 22, these practitioners were still in custody.

(Note: The person is the husband of the notorious director of No. 2 Women's Department of Masanjia)

According to insiders, because there were more practitioners from Heilongjiang Province appealing in Beijing, Haerbing City evil elements successively convened three meetings and plan to intensify persecutions of Falun Gong practitioners. Dafa practitioners. Please be cautious. Do not let the evil take practitioners away easily.

Recently, the evil's activities were rampant in the Northeast Region. A lot of practitioners have been detained. Please be cautious.

In order to clarify the truth much more intensively and widely, many practitioners have brought out all their savings. Some practitioners even sold their homes to raise money in order to promote Dafa.

Some practitioners wrote or sprayed red-painted words (about half meter wide, or 19 inches) on walls on both sides of a railway, which caught the eyes of passers-by. The paint is not easy to remove. Passengers can very easily see it and it has a good effect.

Practitioners enlightened to "validate Dafa with rationality". We should try to clarify the truth in the whole human world, and at the same time, avoid being taken away by the evil.

In the middle of December, four evil persons from Beijing came to Jining City to set up Falun Gong Transforming Class. Fifty practitioners were on the list, but only 4 or 5 were taken to the class. The others all escaped from the class. The vicious people were very annoyed and ordered every work unit to take all the practitioners to the class, by whatever means.

Every night, the bandit-like police began to clear streets. Stall-keepers and street peddlers were cleared out. Security personnel from every work unit and hired plainclothes police were everywhere.