Health Benefits
Disease has long posed as a formidable enemy of the human race. Despite rapid advancement in modern medicine, there are still many illnesses with no known cure. Countless people around the world live and suffer in the shadow of their sickness. The following is a collection of testimonials by people who experienced miraculous recoveries after embracing the powerful self-cultivation practice of Falun Gong. Following the path of "Truthfulness, Compassion, and Tolerance", has brought health, clarity, and wisdom to these people and many more.

These stories represent a small fraction of the numerous accounts of this nature. Because of an ongoing persecution of Falun Gong in China, most practitioners have been unable to share their experience with the world.

Falun Gong, also known as Falun Dafa, was first introduced to the public in 1992 by Mr. Li Hongzhi. Due to its remarkable health benefits and its noble cultivation principles of "Truthfulness, Compassion, and Tolerance," the practice became widely popular across China and around the world in a matter of years. Over the past five years of persecution, practitioners have remained determined in their belief and incredibly compassionate as they clarify the facts to the people deceived by propaganda and lies.

This collection is dedicated to those lost in desperation due to seemingly deadly disease. Our wish is that you benefit by reading these stories, and that a sense of hope and happiness will bless your life from this moment on. 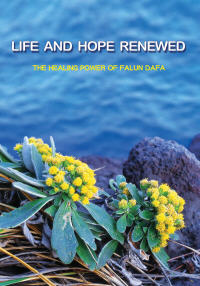