(Minghui.org) Today's news from China includes incidents of persecution that took place in 11 cities or counties in 8 provinces, where at least 33 practitioners were recently persecuted for their belief. 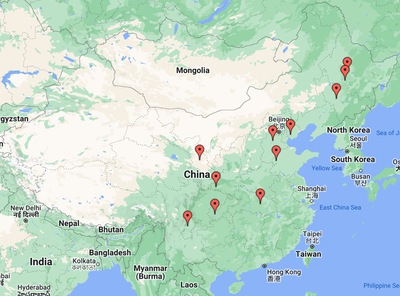 Ms. Sun Lianrong, over 70, was arrested on the morning of August 25, 2022. for talking to people about Falun Gong in Jilin University. Her home was ransacked. Ms. Sun was placed under official arrest and is currently detained in the No.4 Detention Center.

Mr. Zhang Bingliang and his sister Ms. Zhang Yuxiang from Liangtang Township of Guan County were arrested on August 19, 2022. They are currently detained in the Guan County Detention Center. The police confiscated more than 200,000 yuan in cash that Mr. Zhang Bingliang earned from the sale of fertilizer, and 20,000 yuan in cash from Ms. Zhang Yuxiang.

Officers from the Mancheng Town Police Station harassed three practitioners including Mr. Han Liansheng on the morning of August 20, 2022. Mr. Han was called to the village office and was questioned by several officers.

Officers from the Chengguan Police Station went to Ms. Ma Lijie’s parents' home on September 7, 2022. They also went to harass the other practitioners on the same day including Zhao Lingru, Mr. Wei Haihe, and his wife, Guo Dachun, Wang Yulan, and Fan Shuyin.

Three officers including Zhao, head of the Silipeng Police Station, went to Ms. Cheng Xianggou’s home in the Dongmafang Sub-district at 4 p.m. on September 13, 2022. They took some photos.

Ms. Zhang Xingchao lives in the Huaxindushi Garden Community, Wulidian Sub-district, Jiangbei District. More than 20 people from the local police station and the Yubei District Police Department went to Ms. Zhang’s home on July 8, 2022. They ransacked her home and confiscated her Falun Gong books. They threatened Ms. Zhang and her son that Ms. Zhang’s grandson would be implicated if she continued to practice Falun Gong. Ms. Zhang was also watched and followed when she went out. She and her son have received several harassing phone calls.

Mr. Wang Zhengwei was taken from his home in Xinhong Village by officers from the Xinxing Township Police Station to the Shuangcheng District Police Department in mid-July 2022. He was interrogated and released later that day.

Six officers including Sun Nan from the Zhoujia Town Police Station went to Mr. Lin Haikuan’s home at 9 a.m. on July 11, 2022. Mr. Lin was taken to the police station and was pressured to sign something which he refused. He was released that afternoon.

Several officers from the Shanghewan Police Station in Jiutai District went to Ms. Shi Lanying’s home on September 14, 2022. They ransacked her home and confiscated all her Falun Gong books.

Mr. Feng Xinglei received harassing calls from Wei , deputy secretary of Baoji Town Party Committee in Pingchuan District, and was pressured to write the three statements, which he refused. He was threatened that his nephew and niece would be implicated and would not be allowed to take the civil service exam in the future.

Three officers from the Xige Town Police Station went to Ms. Liu Fengyan’s home in September 2022. They took photos and questioned Ms. Liu. They also slandered Falun Gong. These people then went to Ms. Dong Guihuan’s home. She was not at home.

Ms. Yu Hongying and Ms. Song Pingxiu were arrested at the entrance to the Dagangkou Post Office by officers from the Railway Police Department on July 15, 2022. Ms. Zhao Yulin, 78, was also arrested on the same day. Their homes were ransacked. They were interrogated in the police station. Ms. Song Pingxiu and Ms. Zhao Yulin were released on bail early the next morning.

Cai Jianrong from the Dongfeng Sub-district Office and two officers from the Chengdong Police Station went to Ms. Wang Jufang’s home on the morning of September 14, 2022. Ms. Wang, 76, lives alone. These people confiscated her Falun Gong books and a photo of Falun Gong’s founder from her home.

Ms. Jing Fengchun and Ms. Guo Caihua were arrested by officers from the South Square Police Station on September 11, 2022, when they were talking to people about Falun Gong. The two practitioners are detained in the Haoyue Road Detention Center.