A Falun Dafa practitioner in India held more than 40 classes in 17 locations in the remote state of Tripura for more than two months from late April to early July 2022. The 17 places include a university, a temple, and 15 schools. Ten locations were outside Agartala, Tripura’s capital.

The practitioner did not know anyone in Tripura, and no one there ever heard about Falun Dafa or how it’s persecuted in China. Only a few people were aware of how bad the Chinese Communist Party (CCP) is.

The people in Tripura were very kind, honest, and helpful. One person told the practitioner, “Don’t worry about anything while you are here. There are no thieves, and no one will cheat you. People here are very honest and helpful. The only concern is to always carry an umbrella!” He explained that it often rains in Tripura. 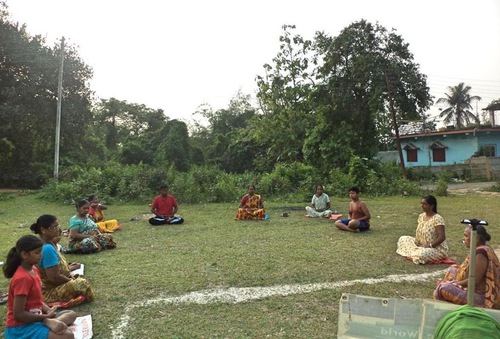 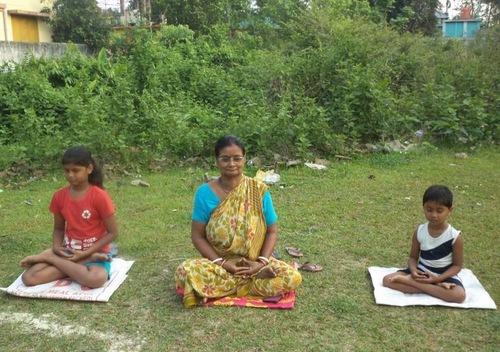 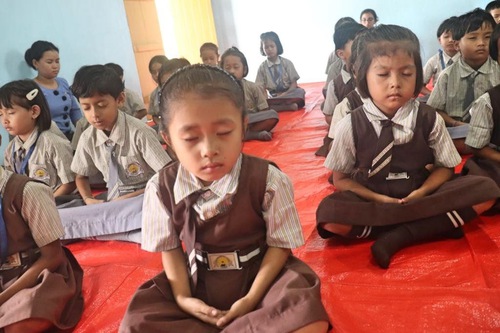 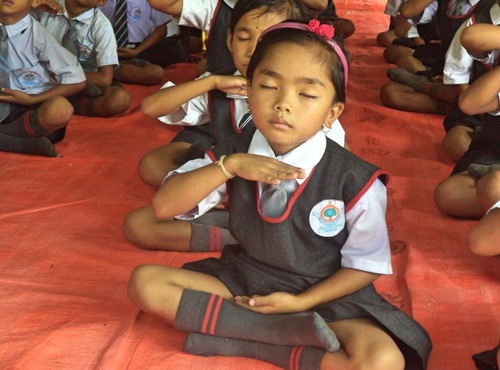 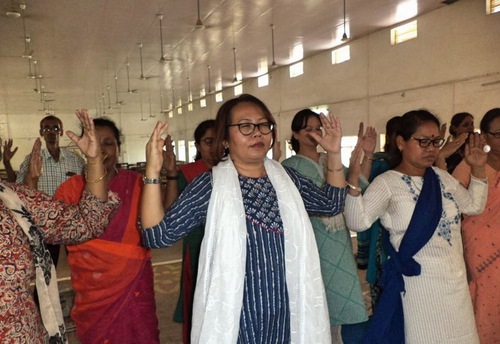 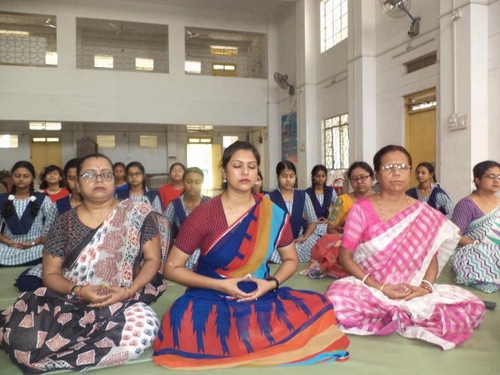 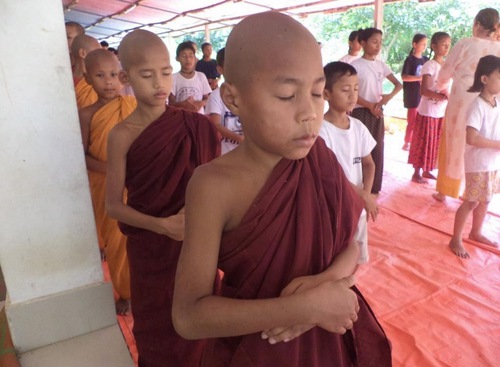 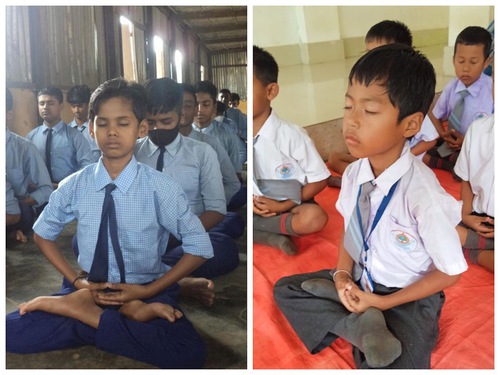 Students, teachers, and parents in the remote northeastern state of Tripura learn the Falun Dafa exercises. 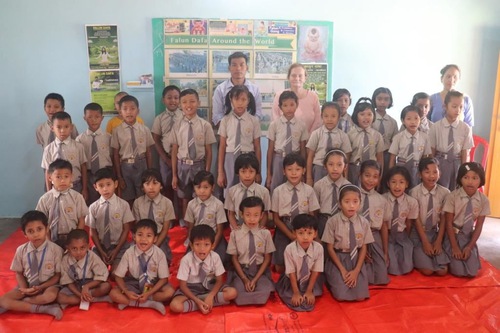 Four Memorable Sessions in One Day

After arriving in Agartala, the practitioner set up a group practice site. The practitioner noticed that several young school children passed by this area with their parents around 6.30 a.m. to go to school and they looked very interested in the people doing the exercises.

During her very last days in Tripura the practitioner asked which school they attended, and then she went there to meet the person in charge. The director arranged classes for her to introduce Falun Dafa the following Saturday, to be held outside. That Friday there were heavy rains so all the schools were ordered to remain closed on Saturday.

The director did not want to postpone the sessions to the following Monday, as she felt that the parents might object due to rain, etc. Early Tuesday morning, when the practitioner did the exercises there, as usual, several children looked longingly at her as they passed, even repeatedly turning their heads, that the practitioner called the lady in charge and told her about the children’s reactions. She explained that she planned to leave Tripura the next day, so that day would be the last opportunity for the children to learn the exercises.

In her heart, the practitioner also felt that she would eternally regret it if she didn’t at least try to approach the lady in charge one more time. Surprisingly, she immediately agreed, and on the very last day of her stay, she held four sessions to introduce Falun Dafa with hardly any breaks in between. She said it was a huge challenge and a memorable one. Most of the children took home the remaining Bengali fliers and also some in English and Hindi to give to their families and friends.

Lawyer: “I Came only for You in This Rain”

The practitioner had an appointment with a lawyer she met previously. She wanted to give him various materials that clarify the truth about Falun Dafa and the persecution of practitioners in China. Despite the heavy rain the practitioner managed to somehow reach the high court building.

Because it was summer vacation, the large room where many lawyers gather was nearly empty and only a few office workers were there. One of them told her, “In this rain, the lawyer will not come here.” The practitioner wasn’t concerned, as there was nowhere to go in the pouring rain anyway.

She felt it was a somewhat magical experience to sit alone in the big empty room with the rain hitting the windows. Everything was grey and dark, the wind and rain continuously pouring down … Suddenly the lawyer hurried inside shouting, “I came only for you in this rain.” He repeated this several times during their conversation.

When seeing the book Falun Gong, he suddenly exclaimed, “This is the best book.” He also accepted many fliers about Falun Dafa to distribute to other lawyers. Because it was still raining, he gave the practitioner a lift in his car to a place near where she was staying.

Several years ago the practitioner had met a person from Tripura who told her that if she ever planned to visit Tripura, she would have to then see a Buddhist school in the very south. He wrote down the name of the school and the district, but not his name or his telephone number. The practitioner carefully kept this little piece of paper for years. She kept reminding herself that she would one day visit this remote state, and travel to an even more remote area in the very south.

Although it proved quite difficult to get the correct phone number for that school, she finally succeeded. She was not only given permission to hold several sessions at the school but was also invited to visit another school nearby.

Despite the ongoing school examinations, several sessions were held and the local children had opportunities to attend them.

From there the practitioner was brought to another smaller day school, a Buddhist school, where two sessions were held.

She was taken to a very remote place the following day. In a temple hall, a session was conducted for students who attended several schools nearby. She also introduced Falun Dafa to a nearby school to many 10th-grade students who were being tutored there.

The next day the practitioner was brought to another Buddhist school in an even more remote location, and she stayed next to the dormitory in the girls’ hostel and happily interacted with them. The local children also had the opportunity to attend several sessions.

In this way, the practitioner visited the very interior of Tripura, saw and stayed in beautiful bamboo houses, and only realized that when she finally took the bus back to Agartala, she hadn’t touched any money for an entire week, as all people had firmly refused to accept any money for stay, food or transportation.

After returning to Agartala she deeply felt that her main mission in Tripura—namely to contact various ethnicities and make them aware of Falun Dafa and of course help them understand the human rights violations by the CCP—was completed. She had accomplished the reason why she traveled to this remote part of India.

The founder of a school in his eighties had poor health. After receiving the book Falun Gong, a lotus flower, and after seeing the photos of children in another school, being introduced to Falun Dafa and its principles, he said with shining eyes, “With my last breath I’ll remember Truthfulness, Compassion and Tolerance.”

A teacher sent the following text message to the practitioner’s phone, “Hope you will explore more places in Tripura and spread the magical powers of Falun Dafa. Best wishes.”

News about Falun Dafa continued to spread online: On a bus returning from the very South to Agartala, when the practitioner gave a flier to a young man, he responded that he is a former student of a school where three Falun Dafa sessions were recently held and that through social media he knew about the sessions and Falun Dafa.

In a park in Agartala, when given a flier, a young woman said that her family is involved with a Buddhist school in the very South, from which she had received via social media the news about the Falun Dafa sessions held there.

A retired man, who held high-level jobs and who has always been concerned about human rights issues in various parts of the world for many years, said that he wanted to sincerely and deeply study all the various materials given to him that explain the truth about Falun Dafa and its persecution in China. He said that he would research more online, and then inform others at higher levels of society about these issues.

The schools where the practitioner held the classes also sent appreciation letters, thanking her for showing the Falun Dafa exercises to students, teachers, and parents, and bringing the values of Truthfulness-Compassion-Forbearance to them. They wished her continued success.