(Minghui.org) Falun Dafa practitioners were invited to participate in the Spirit Fair held in Otaki, New Zealand on September 17, 2022. Otaki is situated between the capital city, Wellington, and North Par, a western coastal town with a history rich in Maori culture.

Local residents stopped by the Falun Dafa booth looking to learn more about the practice and the persecution in China. Many people signed the petition to condemn the persecution and support practitioners. 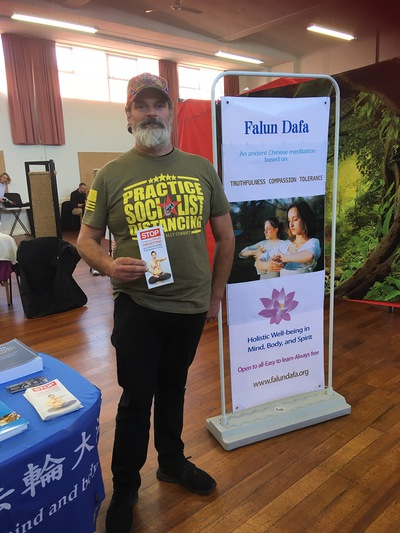 He said that the persecution of faith is definitely wrong. People have the right to pursue their own beliefs. He thought the persecution Falun Dafa is subjected to in China just makes the evil nature of the Chinese Communist Party (CCP) more prominent. He pointed out that communism has already proved to be wrong in all the countries that once implemented communism in their governance. What it brings are only disasters and massacres. Countless innocent people have been tortured to death, starved to death, annihilated because of their race, or are persecuted to death, etc.

Michael pointed out that communist totalitarian regimes all do this for their own selfish gains. They follow capitalism themselves but force everyone else to live according to the communist mode. In the process, they resort to lies and violent methods. This is evil. He complimented practitioners for their efforts in spreading the truth. He wanted to tell people in China that no matter how hard it is, as long as we maintain our belief in God, there will be hope.

A local renowned sound therapist, Mr. Calvin Solomon, also had a booth at the festival. He came to the Falun Dafa booth, chatted with a practitioner and signed the petition to support the movement against the persecution.

He said that China has a very long history and deep culture. Maori people came from China and it used to be a sacred place in the hearts of people around the world. China definitely should not be in its current state. The things that the CCP did to China and its people really makes the Gods angry. He feels that the CCP should disappear from the Earth.

“Your spreading of the truth is very meaningful. If more people know about this matter, the energy in their hearts will unite, the Gods will see it and they will help the good people to turn things around,” he said.

Many festival attendees stopped by the booth and received handmade lotus flowers that were made by the Falun Dafa practitioners. Ms. Moeawhi is a local crystal shop owner. She was surprised and told a practitioner that at the moment she accepted the flower she felt a surge of warm current flow through her arms into her whole body. It was miraculous. She plans to hang the flower in her crystal shop and share this miracle with her customers.