(Minghui.org) The Good Ole Days Festival was held in Hitchcock, Texas, August 15 and 16, and Falun Gong practitioners in Houston participated. People set up dozens of small tents on the grass to enjoy food and performances. The Houston practitioners’ tents were quite distinctive, drawing other attendees' attention. They had a pleasant conversation with Falun Gong practitioners and learned about the spiritual practice. 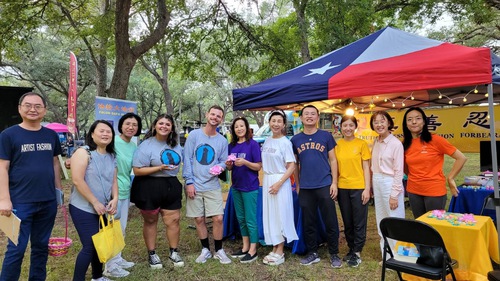 People have a group photo with Falun Gong practitioners.

The practitioners told the local people about the Chinese Communist Party’s (CCP) persecution of Falun Gong in China and mentioned that the CCP infiltrated and misled the world in various forms. The practitioners also recommended these Americans read free e-books such as How the Specter of Communism Is Ruling Our World and Nine Commentaries on the Communist Party.

Many people took pictures of the covers of the books with their mobile phones, saying that they would definitely check them out online and share with friends and family. Some people went to the practitioners’ booth to learn how to fold small lotus flowers and had group photos with the practitioners.

There was a couple at another booth, Donna and her husband Robert. Practitioners introduced Falun Gong to them and talked about the persecution. The couple signed the petition to protest the persecution. Robert agreed that communism had penetrated the United States and said that he would go on the Internet to read How the Specter of Communism Is Ruling Our World and the Nine Commentaries. They also hung the handmade little lotus flower the practitioners gave them on their booth. 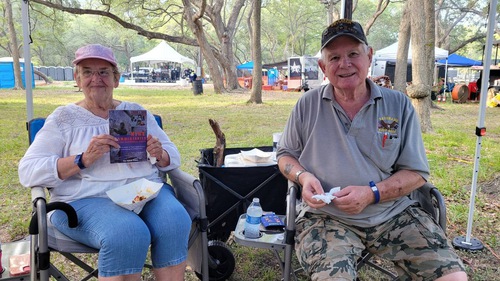 The on-site signature collection went very well. Ms. Kong, a new Falun Gong practitioner, said that she is from China. When she was in elementary school, she watched the CCP’s self-immolation propaganda stunt slandering Falun Gong. In 2017, she learned the truth about Falun Gong by getting around the CCP’s information censorship. She was shocked: “It’s amazing to see so many people still insisting on being good despite the pressure.” Since then, she has started to practice Dafa. She said that practicing Falun Gong had renewed her.

“I told these people that I came from an authoritarian country and felt the freedom of the United States. People in the free world do not know how brutal and evil the CCP is. They were happy afterwards and thanked us for coming forward and telling them about this.”

What impressed Ms. Kong the most was when a woman readily signed the petition and asked several friends to sign it and explained the reasons for it. 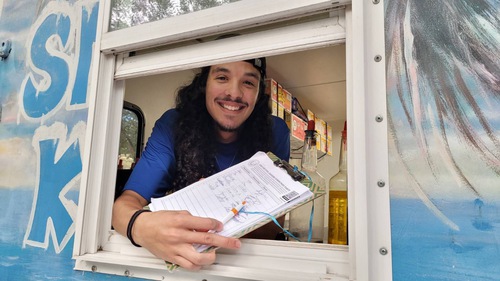 A man signs the petition.