(Minghui.org) To celebrate 400 million people quitting the Chinese Communist Party (CCP) and its affiliated organizations, Falun Dafa practitioners in Toronto, Canada, held a parade on August 6, 2022. The parade participants gathered on Clarence Square, traveled north on Spadina Ave into Chinatown, turned back on College Street, and returned to Clarence Square. 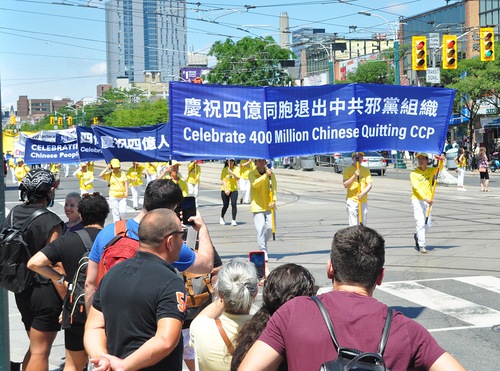 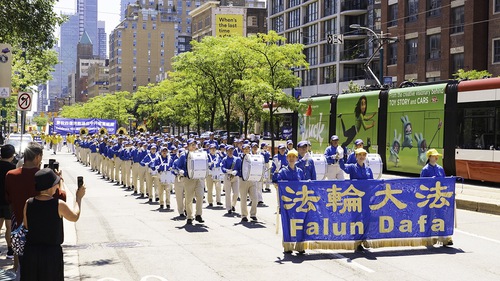 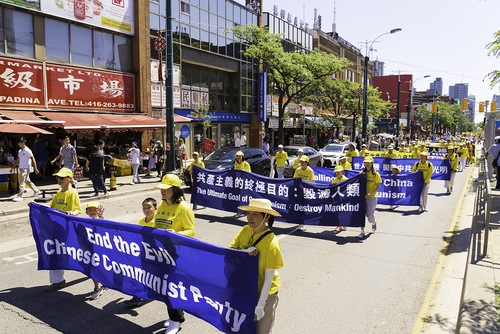 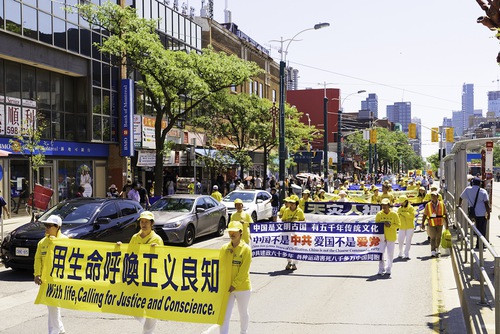 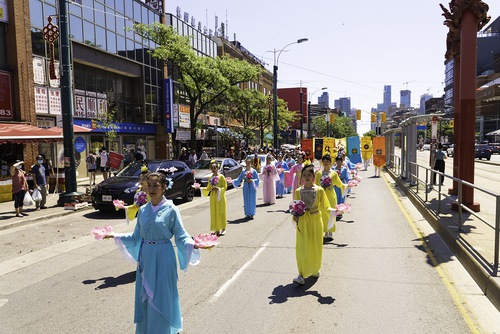 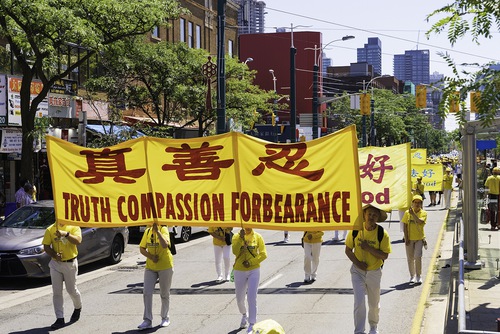 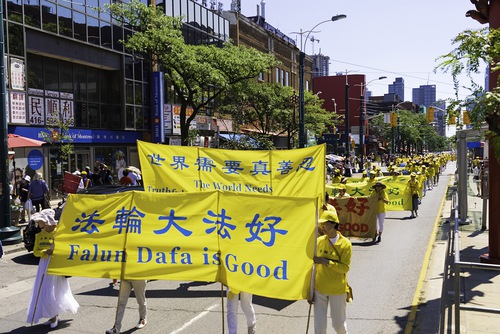 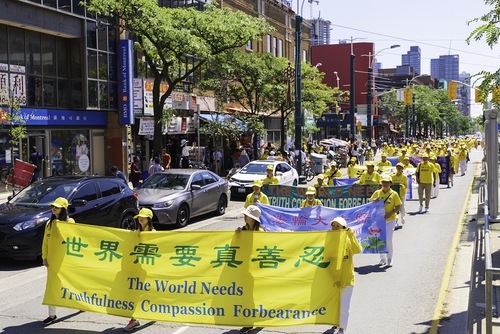 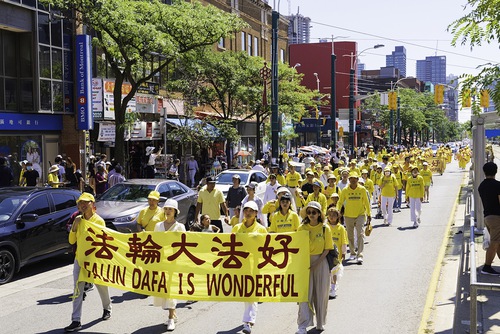 Tourist: I Am Fortunate to See Such a Great Parade 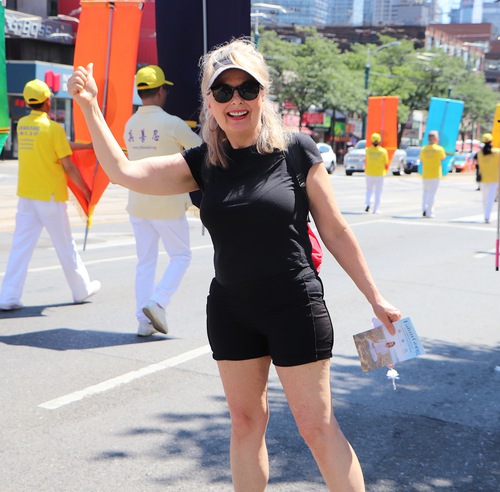 Shirley from British Columbia gave the parade a thumbs up.

Shirley from British Columbia, Canada, said, “This parade is amazing. I am fortunate to see such a beautiful parade.”

She also said she was really happy to see that so many Chinese had quit the CCP, because there is no freedom in China. There is in Canada, she remarked, so she thought it was reasonable for them to express their demands like this, and it may help more persecuted Chinese people get their freedom. She said practitioners did well and she supported their efforts.

Resident: I Am Happy for Those Who’ve Quit the CCP and Congratulate Them 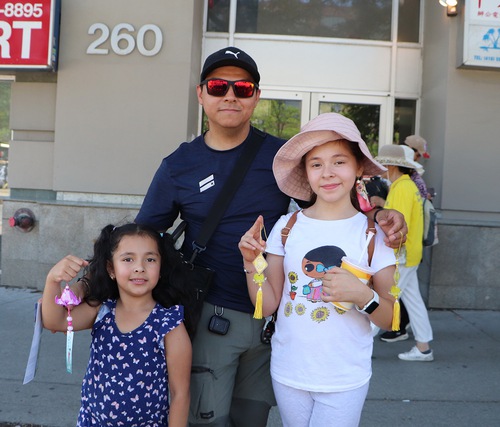 Eduardo and his family watched the parade.

Eduardo, a Toronto resident from Mexico, saw the parade with his family. He said, “Our whole family supports protesting the CCP’s persecution. I know about Falun Dafa, I know what they are doing all over the world. It is clear why they want everyone to quit the CCP, because it is very evil. Our entire family has signed the petition calling to end the persecution. Today, I know that so many people have withdrawn from the CCP. I am really happy for them. Congratulations to them!”

Chinese Canadian: The CCP Perishes When All Chinese Quit It 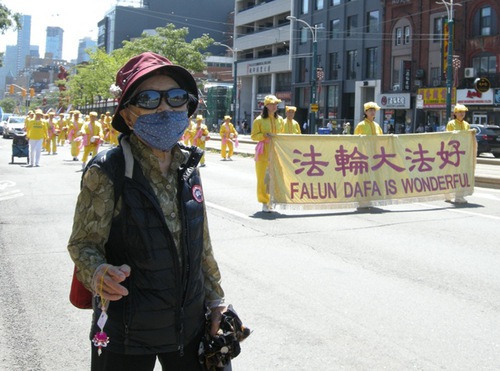 Ms. Chen Xianglan from Hong Kong saw the parade in Chinatown. Although she is old and frail, she stood for a long time to watch it.

She said, “I watch the parade organized by practitioners every year, because Falun Dafa promotes the traditional values of Truthfulness-Compassion-Forbearance in China. The culture promoted by the parade is traditional Chinese culture, such as the Tian Guo Marching Band, celestial maidens, and lion dances. This parade is so good.

“Today’s parade celebrating the withdrawal of 400 million Chinese from the CCP is very meaningful. When all Chinese quit the CCP, it will perish.” 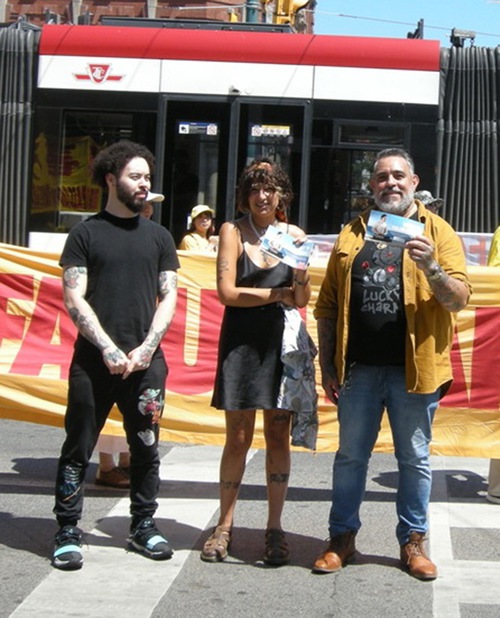 After reading a banner in the parade, a man shouted, “CCP, give Falun Gong practitioners freedom!”

That man was Yovani, an artist from Cuba who is now a Canadian citizen. He watched the parade with two other artists, Zac and Noora.

After a practitioner told them about the CCP’s persecution of Falun Dafa in China, Yovani said, “I used to live in a country like China—where the Communist Party rules. So I know what the CCP has done. The CCP is especially evil, because it persecutes beliefs and persecutes practitioners. Falun Dafa practitioners have no freedom to practice in China.”

“I Will Do My Best to Help Them” 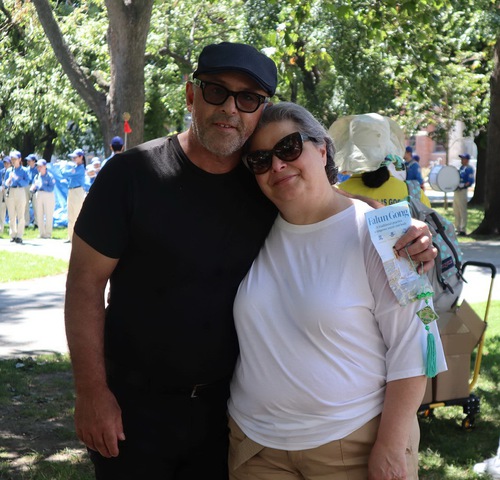 Sonia and her husband Robert

Sonia and her husband Robert stopped to watch the parade. Sonia said she knew about Falun Dafa. When she heard about the CCP persecution, she said, “What it (the CCP) does is stupid. Everyone can have different beliefs and their beliefs should not be limited, that is exactly what the whole world is doing.”

When she learned that the CCP initiated this persecution because it controls China with violence and lies, Sonia said, “Now I finally understand why the CCP persecutes Falun Dafa. I will sign the petition calling for an end to the persecution every year. I signed it, and I told my husband to sign, too, but he never understood why.”

She asked her husband if he understood. Robert said he did. When she learned that there are still many practitioners being suppressed by the CCP, and many were persecuted to death, she said, “I will do my best to help them. I hope it will get better. I hope your voice can be noticed by more people. I hope this persecution can be stopped as soon as possible.”

“I Stand with You to Protest the CCP Tyranny” 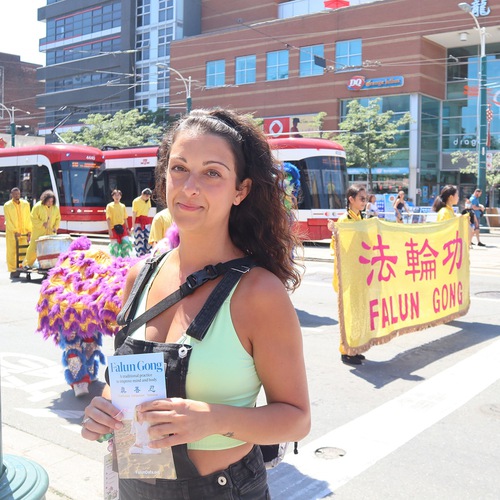 Sabrina said that she’s seen practitioners’ parades before. When she learned that this parade was to celebrate the 400 million Chinese people who’ve quit the Party, she said, “This is really great. You should keep doing it to let more people know about this. I support you very much, and I will stand with you to protest the CCP tyranny.”

She said she knew a lot about the persecution of Falun Dafa. She said the CCP should stop it as soon as possible because everyone has the right to their own belief.

A Spectator Celebrates the Chinese People Quitting the CCP 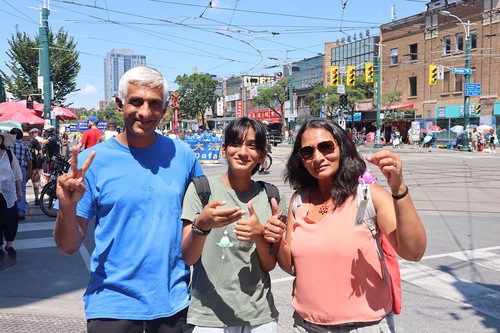 Saumio and his family were excited when they saw the parade passing by. When asked if they had heard of Falun Dafa, Saumio said, “Of course! We have seen it in the English newspaper The Epoch Times. We subscribe to this newspaper, which is the only media we trust.”

Talking about the CCP’s persecution, he said, “This is unreasonable. Everyone should have freedom of belief. Beliefs come from a place that is higher than the government. A government cannot decide whether a person should have faith or not.”

When he heard about the 400 million people who have quit the CCP and its affiliated organizations, he said, “That’s really great.”

Saumio and his family also told the people around them what they knew about Falun Dafa and how the CCP persecutes it.

Falun Dafa (also known as Falun Gong) was first introduced to the public by Mr. Li Hongzhi in Changchun, China, in 1992. The spiritual discipline is now practiced in over 100 countries and regions worldwide. Millions of people who have embraced the teachings—which are based on the principles of Truthfulness, Compassion, and Forbearance—and have learned the five exercises have experienced improved health and well-being.