(Minghui.org) Today's news from China includes incidents of persecution that took place in 11 cities or counties in 5 provinces, where at least 13 practitioners were recently persecuted for their belief. 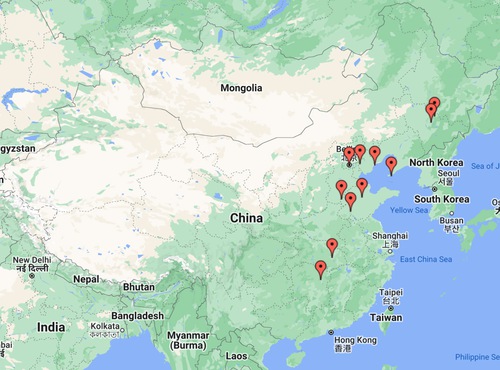 The trial against Ms. Mi Jinying and numerous practitioners is scheduled for June 21, 2022, in the Rencheng No.1 Court.

Ms. Zhang Liping of Shuiquliu Town was arrested by officers from the Tiedong Police Station and the Shuiquliu Police Station on May 13, 2022. To make her case look more severe, officers counted each page of her Falun Gong brochures, and submitted this to the procuratorate.

The case against Ms. Yu Shoufen was submitted to the Ganjingzi District Court.

Ms. Li Zhongxiu was harassed at home by officers from the Qidu Town Police Station in the early hours of May 26, 2022. They claimed someone reported her when she distributed Falun Gong flyers, and they confirmed it via fingerprints. She was forced to sign documents, including a ten day detention notification, although it was not executed. They seized her Falun Gong books, video players, and other items.

Ms. Yang Huiru was arrested on January 18, 2022. She was taken to a detention center on June 19, but the guards refused to accept her because her blood pressure was as high as 245 mmHg. Police called her son to bail her out.

The police station called her son on April 27, and ordered him to take her to the police station to fill out the remaining paperwork. They went. The officers told her to report to the procuratorate the next day.

Her son was called again around 6:00 p.m. on June 12. The officer told him to drop her off at the police station the next day, and they would take her to the Liuyang Court for trial.

Ms. Wang Yuling was arrested by two officers from the Nanmofang Police Station around 8:00 p.m. on June 9, 2022, after someone reported her when she talked to people about the persecution of Falun Gong. The officers dragged her into a police car, drove to her home, searched the place without showing any documents, and seized a picture of Falun Gong’s founder, Falun Gong desk calendars, pictures hanging on the wall, and other items.

They went to the police station, collected her biodata, e.g. blood pressure, height, and a 3 minute sample of her voice. The officers claimed she should be subjected to 15 days of detention, but they released her on bail after considering she had a patient to care for at home. They had her son-in-law take her home after 10:00 p.m.

Ms. Han Xiujuan lives in the Liyuan community. She was arrested by officers from the Haiyang Police Station on May 7, 2022, when she was talking to people about the persecution of Falun Gong.

Six plainclothes officers from the Guan County Police Department and the Qingshui Police Station raided Mr. Chen Tingxiang’s home around 1:30 a.m. on June 14, 2022. They videotaped every room, including restrooms, saying they were looking for practitioner Ms. Zhou Chunling. They asked Mr. Chen if he knew her.