(Minghui.org) Falun Dafa practitioners held an experience-sharing conference at the Georges Vanier Cultural Center in Montreal, Canada on June 19, 2022. Ten Chinese and Western practitioners talked about how they put the principles of Truthfulness, Compassion, Forbearance into practice, made progress in cultivation, and participated in activities to tell people about Falun Dafa and the persecution. 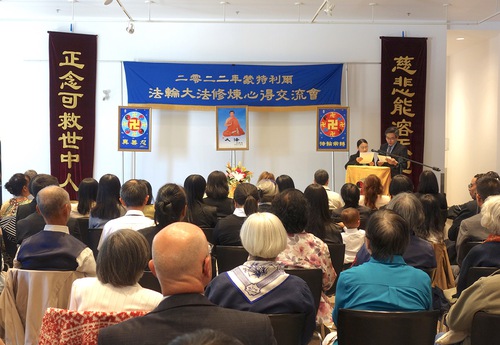 Practitioners held a conference to share cultivation experiences in Montreal on June 19, 2022. 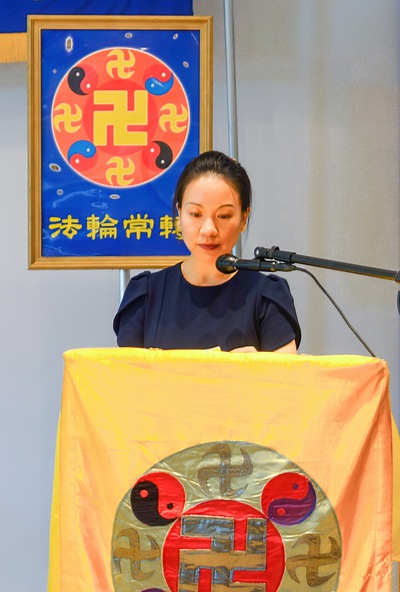 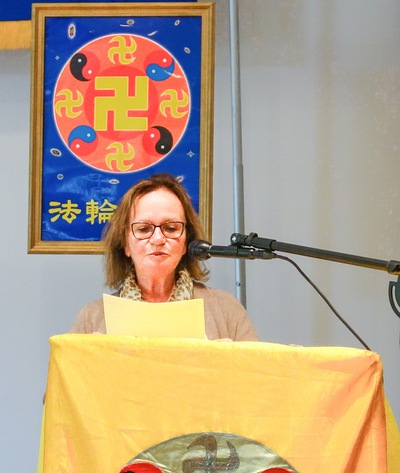 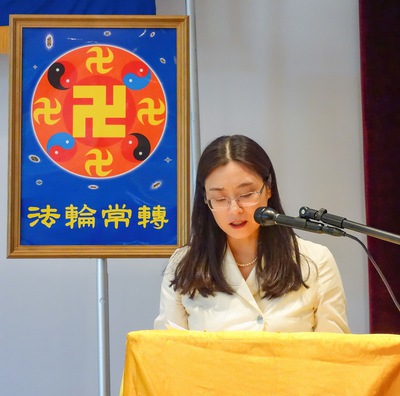 Practitioners speak about their cultivation experiences.

Ms. Ma talked about how she helped to coordinate putting up Shen Yun posters for the first time this year. Because she had no prior experience in coordinating a team, she preferred to go out and put up posters herself as it would be easier than making phone calls to get other practitioners to do it. But then she realized as a coordinator, she is responsible for getting more practitioners involved in the task. She realized this was part of her cultivation and only by reaching the standard could she pass the test.

She knew from making phone calls to clarify the truth that she should have an attitude of “carrying sentient beings in her hands” to help awaken them. She shared her thoughts with other practitioners. At times, she spoke on the phone for half an hour to an hour. She prepared everything she could think of, including the distribution of maps and so on, as well as providing online and face-to-face training. Within two months, practitioners took most of the posters. This was the highest number of practitioners who participated in many years.

Sometimes, posters were returned for no reason after being taken, causing Ms. Ma to become anxious and upset. Yet she knew that forcing practitioners as though it was an everyday person’s job would not work. She felt that she was tempered time and again, and kept looking inward and handling problems with a righteous mindset. In the end, all the posters were put up. It was the first time this goal was accomplished during local Shen Yun promotions. Looking back, Ms. Ma understood that the tests she met with while coordinating the task could only be overcome through kindness and compassion. There was no other way. Every improvement gained amid hardship would not be possible without Master Li’s (Dafa’s founder) protection.

Things Change When We Look at Problems with Righteous Thoughts

Michiline, a Western practitioner, said she felt lost during the first few months after she retired from a stressful job. It was as if her life had become incapacitated. She decided to send righteous thoughts more often and persisted in studying the Fa. But she had trouble with her eyes and it interfered with her Fa study. Yet she did not give up.

Her eyesight and understanding of the Fa principles improved tremendously afterward. She knew she should not waste such precious time. Even if it is a minute or a second, she must practice cultivation and save people with righteous thoughts and kindness. She joined practitioners in truth-clarification activities in front of the Chinese consulate and Chinatown.

One time, Michiline was the only practitioner outside the Chinese consulate. For various reasons, the other practitioners could not come. She only had a petition and did not have any fliers or information boards. Many human thoughts came to mind. She was afraid of being rejected. She took out the petition. Just then, someone working at the construction site outside the consulate walked up to her. She told the person about the persecution and explained what Falun Dafa is. The person signed the petition without hesitation. Later, several workers and passersby stopped to sign her petition. Within a short period of time, she’d collected two dozen signatures.

Michiline realized through this experience, “Things will change when we change our mindset and face difficulties with righteous thoughts.”

Ms. Cong is responsible for handling the accounts and ticket sales during Shen Yun promotions. The workload is heavy and there are tight deadlines to meet. She is an impatient person but often the more agitated she became, the more problems arose. Many times, unexpected situations came up. Mailed-out tickets were returned, customers refused to pay for their tickets with credit cards, customers asked to switch tickets, and so on. While handling such problems, either the paper got stuck in the printer or her hand was cut by the paper or tickets.

She enlightened that it was Master giving her hints to get rid of her grumpiness and to treat these issues as cultivation. She realized that if she carried out her work without keeping cultivation in mind, her efforts would not help save people. After she had this realization, Ms. Cong adjusted her mindset and finished her tasks with the heart of being responsible to sentient beings and upholding Shen Yun’s high reputation. She stopped being nervous and did her work calmly. She no longer made mistakes while handling several thousand tickets this year. Furthermore, no one refused to pay for tickets with credit cards.

Ms. Cong feels that Master arranges things based on the situation and cultivation state of each disciple. Such arrangements are the best and most appropriate for every practitioner.

Learning to Let Go of Self Through Participating in Group Projects

Ms. Liu played the small drums when she first joined the Tian Guo Marching Band. She was bothered by the extreme heat or heavy rains that sometimes happened during parades. Her shoulders became sore due to the weight of her instrument. But such physical suffering was nothing compared to tempering her mind. She had the habit of finding fault with others and it sometimes made her feel frustrated with the other band members.

For example, she thought the other drum players had a poor sense of rhythm and missed the beat. Sometimes when the band leader arranged the lineup of members, some practitioners refused to be in less desirable positions, claiming they were not good enough. She thought these practitioners were whining. Such negative thoughts often filled her mind and it made her want to quit the band many times.

Ms. Liu had an argument with her mother one day before heading out to participate in a parade. She was physically and mentally exhausted and thought she would quit the band after the parade that day. But she was moved by a powerful energy when she arrived at the gathering spot and started to practice. It was the first time she truly felt such a powerful energy from the whole body of practitioners. She no longer felt she was an individual but was overwhelmed by the music full of compassion played by the whole body. She wept uncontrollably and said in her heart: “Master, I was wrong. I want to stay in the band.”

“Should I follow the right beat or play along with others who missed the rhythm?” This was a question that plagued her for a long time. Now she thought the answer was simple: “Look within at once when you run into problems. Think of how to harmonize the group to achieve the best effect in saving people. Don’t pay too much attention to who is right or wrong and be kind to others, stop finding fault and complaining.”

Many practitioners said they benefited from attending the conference. Some said the articles read by practitioners were a reference for them to spot inadequacies in their own cultivation. Others said it was an inspiration and encouragement for them to cherish the time given by Master. They hoped to be more diligent in cultivation in the coming year and seize the time to awaken people.