(Minghui.org) Falun Dafa practitioners in Hong Kong held a conference to exchange their cultivation experiences on June 11, 2022. The last conference was held three years ago. Fifteen practitioners talked about how they made progress in cultivation and were strict with themselves in putting the principles of Truthfulness, Compassion, and Forbearance into practice in everyday life and at work. 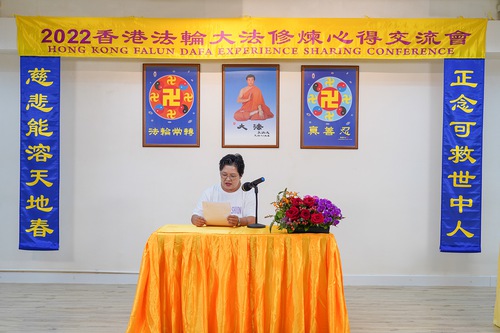 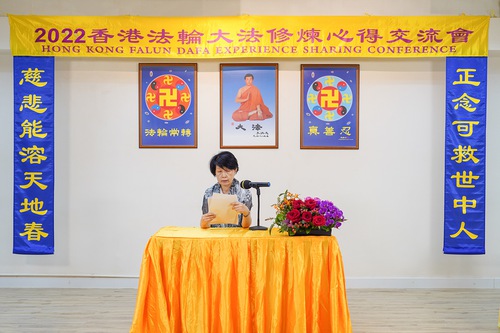 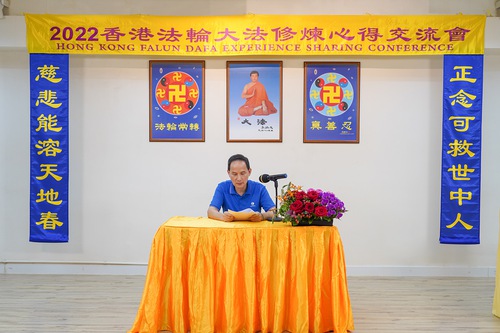 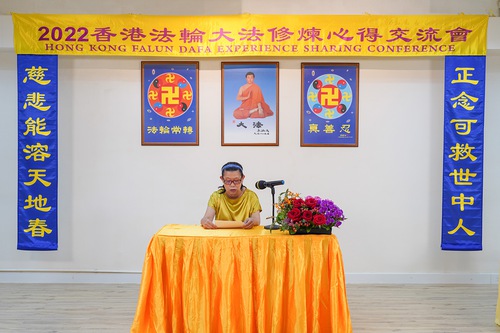 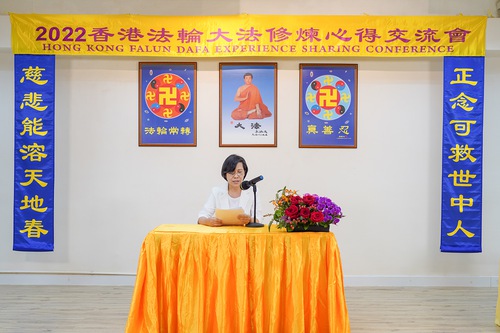 Despite the pandemic and the change in Hong Kong’s political environment over the past two years, practitioners continue to persist in clarifying the truth at tourist attractions and other public places. Some practitioners wept as they talked about how they often experienced the compassionate protection of Dafa’s founder, Master Li.

The MC read out a poem written by practitioners expressing gratitude to Master. Liang Zhen, spokesperson for the Falun Dafa association in Hong Kong, said it was not easy to hold this event in light of the current political situation. She called it “a manifestation of the upward trend of righteous energy,” and hopes that practitioners in Hong Kong will be inspired to practice cultivation more diligently and be encouraged by the conference to help people learn the facts about Falun Dafa.

Eliminating Fear While Handing Out Information

Ms. He has been handing out information about Falun Dafa around different parts of the island for several years. In the beginning, the environment was comparatively relaxed. However as the political situation changed drastically, she developed fear. For a period of time, she encountered people who reported her and the other practitioners to the police who would then record the practitioners’ identities. When they exchanged experiences, the practitioners realized that this was caused by their fear. Ms. He decided to get rid of the mentality of trying to avoid the police. Instead she would recite the Fa she had already memorized while distributing materials. One time, she saw a police officer approaching her from afar. She controlled her fear and told the fear to go away. In an instant, she felt that a huge energy eliminated the bad elements behind the officer, and the interference vanished. Practitioners also make a point to send righteous thoughts to clear up the field before they hand out information. From then on, no police officers have stopped to record practitioners’ identities.

In addition, practitioners switched from simply handing out information to helping people quit the Chinese Communist Party (CCP). Ms. He credits Master’s protection and blessings for enabling their truth-clarifying project to continue smoothly all these years

Returning to the State When One Began Cultivation

Xiao Tong is a young practitioner with many years of experience in management in her everyday job. While working at the Tianti Bookstore, she realized that behind her notions are hidden attachments such as pursuit of fame and gain, resentment, negative thoughts and fear of taking on responsibilities. She argued with others to prove she was right but she knew that this is not the standard a practitioner should follow. Instead, she should follow the principles of Truthfulness, Compassion, Forbearance. She realized that conflicts at work are opportunities to improve, eliminate human attachments and cultivate compassion.

While volunteering to host a nine-day Falun Dafa introductory class, Xiao Tong felt enveloped by a powerful, compassionate field as if Master was present. As she listened to Master’s recorded lectures and observed how new practitioners cherish the opportunity to practice Dafa, she felt the negative, passive matter in her dimension leave. She rediscovered the feeling she had when she first began practicing.

Applying the Principles at Work

Ms. Huang began to practice cultivation at a young age and has been a practitioner for over 20 years. She joined an international company upon graduation and later moved to Hong Kong for work. Through Fa study, she understood that she should follow Master’s requirements in every aspect of her life, work and cultivation. She saw her attachment to fame, gain, competitive nature and jealousy while working with colleagues. She knew that these are not her true nature, and that she should eliminate these bad thoughts. She shared her experience unreservedly with coworkers and made sure she carried out her duties responsibly. She did not complain when the workload was heavy. She regarded those who treat her well or badly as people arranged by Master to help her improve in cultivation.

Ms. Huang wept several times as she spoke of her cultivation experience, “Indeed, words cannot express my gratitude to Master!”

Handing Out Nine Commentaries During the Pandemic

Ms. Yang lives near the border between Hong Kong and China. She felt the urgency of saving people when the pandemic broke out. She decided to let go of her fear, and she hung a huge banner with the message: “Sincerely recite Falun Dafa is good, Truthfulness, Compassion, Forbearance is good! This is a great way to protect oneself during the pandemic.” She gained her husband’s support as well. Amazingly, a field of ornamental grass grew outside her village and attracted droves of Hong Kong residents. The entrance to her house with the banner became a tourist attraction. Some villagers said, “Falun Dafa is amazing! It protected out village, and no one caught COVID.”

As the political climate in Hong Kong changed, Ms. Yang realized that telling people about Dafa is the key to eliminating the evil in other dimensions. When Ms. Yang distributed the Nine Commentaries on the Communist Party one day, a middle-aged woman angrily called the police. Twelve policemen showed up. She knew as a practitioner that she should not be afraid. She thought, “What’s wrong with carrying several copies of the Nine Commentaries? Are the contents of the book wrong? Of course not.” Her righteous thoughts came out. She greeted the policemen warmly and told them to remember that Falun Dafa is good, and that this would help them avert danger. The officers thanked her. They did not even ask to check her documents and soon left. Ms. Yang learned from the incident that Dafa disciples are the main players in the performance and they are the hope for sentient beings.

Wisdom Unlocked Through Memorizing the Teachings

Ms. Lu ran into problems in a truth-clarification project. She knew it was because she had not studied the Fa well. She decided to memorize the Fa. It was difficult to persist in the beginning. She stopped and started again amid all kinds of interference. She asked Master for help. She gradually understood several Fa principles after she was able to read the Fa with a focused mind. The more she memorized the Fa, the more she discovered. It filled her heart with joy and gratitude. When Ms. Lu looked back at what caused the problems in the project, things became clear. The so-called setbacks were easily resolved.

She realized that only the wisdom and ability gained through Dafa can help her accomplish her mission arranged by Master. This cannot be achieved through an ordinary person’s passion, experience or effort. She also changed her mindset that she needed big chunks of time to memorize the Fa. She switched to memorizing the Fa whenever she had a moment and was not attached to how much she could remember. That way, she spent more time studying the Fa.

The Truth-clarification Site is Our Cultivation Environment

Mr. Zeng started to practice Dafa in 1994. He has done the exercises and told people about the persecution at the Star Ferry Pier in Tsim Sha Tsui since the persecution began. Many tourists stop and read the display boards, or watch the videos on his television. Because this is effective in bringing people the truth, it touched the nerve of the Chinese Communist regime and the site was sabotaged many times.

No matter what happened, Mr. Zeng continued to do the exercises calmly. He explained, “This is our cultivation environment. In the end, the saboteurs left but we are still here.” Over the past two years, many Hong Kong residents are trying to move to other countries as they are worried about the unstable political situation. When they saw practitioners continue to do the exercises at the truth-clarification site, many people said, “We feel relieved that you are still here.”