(Minghui.org) To celebrate the 30th anniversary of Falun Dafa’s public introduction and the 23rd World Falun Dafa Day, Houston practitioners gathered at Herman Park on May 1, 2022. They also wished Mr. Li Hongzhi, the founder of Falun Dafa, a happy birthday. Practitioners took a group photo, did the exercises together, and taught interested passersby the exercises.

Falun Dafa, also called Falun Gong, was introduced to the public by its founder, Master Li Hongzhi, on May 13, 1992. It is now practiced in over one hundred countries worldwide. Falun Dafa’s main book, Zhuan Falun, has been translated into more than 40 languages.

It was a beautiful, sunny day, and practitioners in yellow T-shirts and white pants decorated the area with “Falun Dafa Is Good” banners, “Falun Dafa Is Good, Truthfulness-Compassion-Forbearance Is Good” display boards, lotus flowers, and a balloon arc. 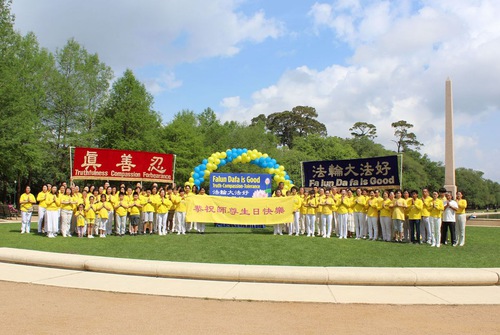 They demonstrated the exercises near McGovern Lake. The rippling water and green grass made for an inviting practice site. 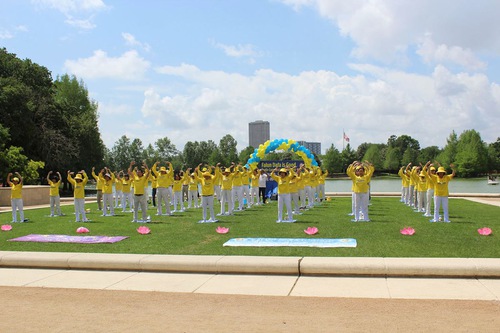 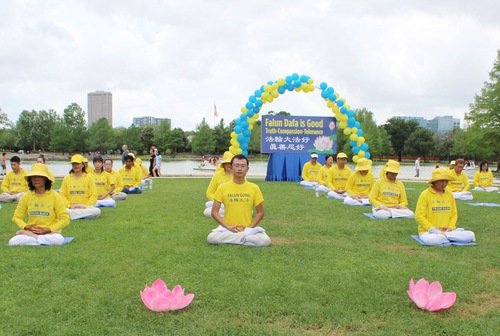 Practitioners did the exercises in Herman Park on May 1 to celebrate World Falun Dafa Day. 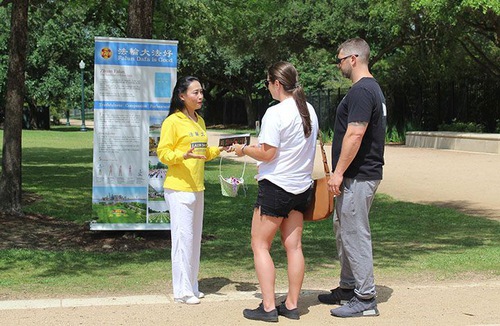 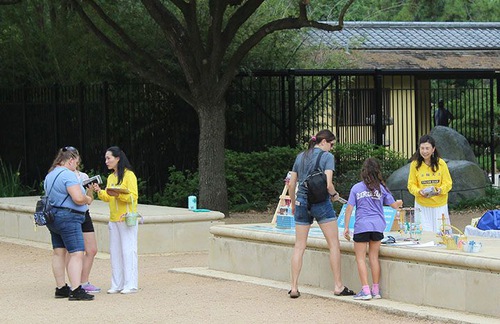 Honored to Be a Falun Dafa Practitioner

Ms. Dai said, “I feel honored to be here and to participate in this event. When I think of Master’s protection and care, I am moved to tears. Thank you, Master.” Ms. Dai said she used to be plagued with ailments, but after practicing Falun Dafa, she gained confidence.

She said, “Before I started practicing Falun Dafa, I had anemia, arthritis, and insomnia, among other health problems. I often felt giddy and weak and sometimes faint. I was told that my hemoglobin level was low. Trivial matters bothered me and I could not sleep. I felt depressed.

“In 1998, a colleague who knew about my condition told me about Falun Dafa. I did not believe anything could help, but she urged me to give it a try. I came to learn Falun Dafa with the thought of just trying it out, never expecting that all my health issues would gradually disappear! After I began practicing, I felt invigorated and was no longer depressed. I told my mother about how I benefited from the practice and she also began practicing.”

Ms. Dai said, “No words can describe my gratitude to Master. I can only be more and more diligent in my cultivation in order to repay him!”

Ms. Wang said, “In 2019, was I browsing the Tianti Bookstore website and saw that new practitioners are asked to read the Fa and practice the exercises every day. That led me to understand that this was real cultivation. When I read the teachings, I felt Master’s vast benevolence and decided to truly enter into Falun Dafa cultivation. Actually, when I was 13, qigong fever swept through China, and I learned Falun Dafa with one of my aunts. At that time, Falun Dafa left an impression on me.

“After I started cultivating, my way of dealing with things totally changed. Before, I would get agitated if I thought I was treated unfairly. After I began practicing Falun Dafa, I took better care of my family. Apart from looking after the children, I do most of the housework. I treat hardship as a form of cultivation so I no longer think I am being treated unfairly.”

Miss Shirley said her health was restored after she began practicing Falun Dafa. She said, “I was diagnosed with many health problems, such as heart disease, angina pectoris, superficial gastritis, a duodenal ulcer, a lacunar cerebral infarction, and cerebral vasospasm. I felt as if my heart was weighed down by a stone. It was also very hard for me to walk. I often needed to be hospitalized and these illnesses tortured me.

“But after I started practicing Falun Dafa in 1996, no matter how busy I was, I would wake up to do the exercises every morning at 5 a.m. I also tried to improve my xinxing. Gradually, these health issues disappeared without me realizing it. My life became meaningful again. Benevolent Master introduced Falun Dafa to the world so that many kind people are able to benefit both physically and mentally from it.”

Liz came to the U.S. from China four years ago. She said, “My mother started practicing Falun Dafa in 1996. She benefited a lot and urged my husband and me to practice. I had suffered with a herniated disc for more than six years. I worked in the finance sector in China, which required me to sit for prolonged periods of time. I had to see a doctor about the pain in my waist and back. I got acupuncture and massages to ease the pain. However, after I practiced Falun Dafa, I felt great and no longer needed those treatments. I could easily do the exercises. Gradually the pain disappeared without me realizing it. I also became compassionate and got along with my coworkers. Cultivation benefited me both physically and mentally.”

The practitioners’ activities attracted many passersby who took photos and videos. The tourists on the small, crowded trains that run through the park waved to practitioners, and some even filmed the event. Many people listened as practitioners told them about Falun Dafa. Some imitated the practitioners as they did the exercises. One of them was a middle-aged American lady, Miss Brenda.

After following Miss Wendy to learn the exercises, Ms. Brenda said, “The atmosphere here is so peaceful. Everything is peaceful. I felt very strong energy.”

She pointed to the words “Truthfulness-Compassion-Forbearance” printed on the Falun Dafa brochure and said, “I think that Truthfulness, Compassion, and Forbearance are very powerful. I will come here (Herman Park) to practice the exercises every Saturday. I will also read the teachings.”