(Minghui.org) I am a Russian Falun Dafa practitioner and I have lived in Ukraine for 15 years. My husband and I began practicing Falun Dafa 20 years ago. In Kyiv many people already know about Dafa and the persecution in China. For many years, practitioners have regularly held activities in the most crowded places. We had a permanent practice site on the main street in the capital several days a week, including every weekend.

But one morning our country awoke to explosions. Rockets began to fly over us, bombs exploded. There seemed to be total chaos all over.

At first we didn’t know what to think about it. I couldn’t process what was happening. But from the very beginning I had the understanding that we needed to continue doing the three things and maintain our cultivation environment by studying the Fa, doing the exercises, and working on our truth clarification project.

I tried to just ignore the sounds of war. Besides, to be honest, I was asleep when the war began. For some reason the very first explosions did not wake me up, although I usually sleep very lightly. When I was told about them in the morning, I didn’t believe it—how could bombing not wake me up? From this I understood that what is happening around us should not affect us and that in the midst of all this chaos, we have our own path.

My husband and I were supposed to visit my mother in Russia, but at the last moment I decided to postpone the trip a week. That was the week the war began. It also made me understand that we just need to be in Ukraine during this historic period.

Remaining Firm Despite the Chaos

On the fifth day the situation heated up. There were several strong blasts next to us. Once a bomb dropped from an airplane exploded: several private houses burned down, a woman was killed. Also, a cruise missile was shot down right above our multi-story building: access doors were knocked out and window frames were damaged. At the same time, all the window glass in our building surprisingly remained intact, and no one was injured. Our apartment was not damaged at all.

We were surrounded by the sounds of constant explosions, the whistling of missiles overhead, and the tinkling sound of breaking glass outside. Periodically our house shook as blast waves hit the windows. Everything became very unsteady and seemed to be about to collapse, including our house. We slept in our clothes. We carried our documents and telephones with us even around our apartment in case we suddenly needed to escape our collapsing building. It really seemed that we were facing death.

My husband and I continued to study the Fa together, did the five exercises every day, and continued to work. When night came, due to the constant threat of bombing, we could not even turn on the light.

About half of the inhabitants left Kyiv at that time. About 10% of the residents stayed in our building. We were the only ones on our floor out of 10 apartments. About half of the practitioners also remained in Kyiv. We constantly offer each other our support via the Internet. We all feel the importance of each one of us during this period.

I remembered many of Master’s Fa teachings and I thought: “We are practitioners. Then shouldn’t we follow the course of nature and play our role here, since we are in this place during this historic period?” I also understood that everything was in Master’s hands.

Identifying and Removing My Attachments

At that time, I was under intense pressure. It was even difficult for me to straighten my back, and there was a constant spasm in my stomach. The situation surrounding us was very gloomy, including the weather. It snowed, and black clouds mixed with the smoke of battle hung over the city. At times it seemed that we were alone at the edge of the universe, face to face with some huge darkness. But I felt that I needed to endure, to remain firm. I felt that if we got scared, upset, or angry or displayed other human emotions now, we wouldn’t be able to play our role as practitioners.

We realized the importance of doing all the exercises regularly (before we were not very diligent about that), and decided to go out and do exercises one to four in the courtyard of our multi-story building. The neighbors saw us through their windows, and they later told us they felt encouraged.

We also started going out and distributing my handmade paper lotus flowers and a newspaper about Falun Dafa to people. There were very few people on the streets at that time. Everyone was happy to see each other. I gave people lotus flowers and talked about the principles of Truthfulness-Compassion-Forbearance. In such a bleak and seemingly hopeless environment, it is very easy to do. People are very sensitive to kindness now. After hearing about the principles of Dafa and how practitioners in China have not given up in the face of the evil communist persecution, many people began to cry. Some told us that it was God who sent us to them. 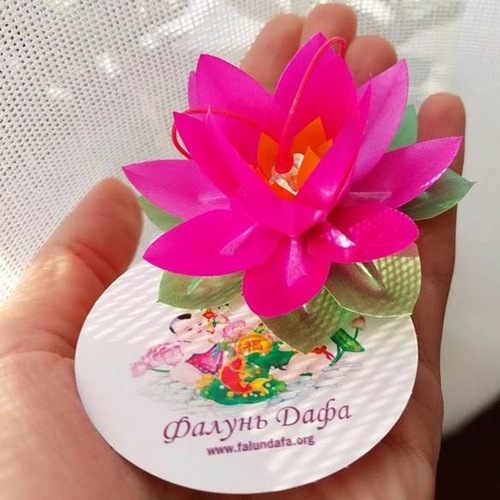 The lotus flower we give out to local residents

I also constantly tried to look inward to remove fear. Also, when I heard the loud sounds of war, I saw struggle and toughness within myself and tried to get rid of it. When things were quiet, it seemed that our self-improvement had a direct effect on the environment around us.

I began to better understand practitioners inside China. Their days are strictly planned, and there is no time to be idle. I learned what it means to cultivate oneself diligently.

Gradually, we became calmer and steadier. Master in his portrait was already smiling and seemed very young. It was as if what was happening around us did not concern us—we were just doing the three things that practitioners should do, and some kind of movie was playing outside. At first, my mind stopped responding to the sounds of war. Then my body stopped responding to sounds of war—I no longer jumped when there were explosions while we were doing the exercises. I could open my eyes and see flying rockets and then just close my eyes and continue with the exercises: this did not concern us. Gradually, the sounds of war lessened, and the situation in our area stabilized. People began to return to their homes.

A few weeks later, practitioners in Kyiv resumed doing the exercises in the city center on the weekends and our weekly in-person group Fa study.

Above is my understanding at my level and in our situation. Amidst the dangers of war, I don’t think that everyone must stay. I only do what I do based on my own understanding.

I will try not to let up in my cultivation. Thank you, Master, for your mercy for all living beings, for protecting us from danger, and for such an opportunity for us to cultivate and elevate!