Düsseldorf, Germany: Falun Dafa Practitioners Call for an End to the Persecution Outside the Chinese Consulate

(Minghui.org) Falun Dafa practitioners from Düsseldorf and surrounding areas gathered outside the Chinese Consulate on April 27, 2022. They demonstrated the Falun Dafa exercises and collected signatures for a petition to commemorate the 23rd anniversary of the April 25 Appeal in China. They also called for an end to the persecution by the Chinese Communist Party (CCP) that has persisted for 23 years. 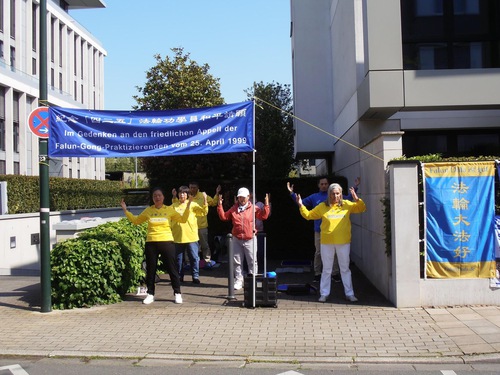 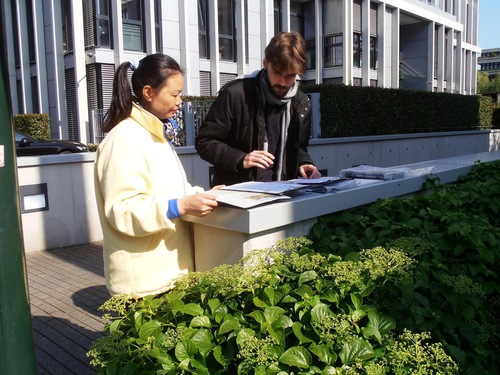 A man signs a petition calling for an end to the persecution of Falun Dafa in China.

Ms. Xu experienced the April 25 Peaceful Appeal 23 years ago. She recalled that her most profound impression after she arrived outside the Appeals Office of the State Council was that practitioners were peaceful. No one spoke loudly. Some were reading Zhuan Falun, the main book of Falun Dafa, while others were doing the sitting meditation. Everyone was lined up in an orderly way on the sidewalk, with traffic being able to pass smoothly. Two police officers standing nearby looked relaxed. The practitioners dispersed after they heard that then Premier Zhu agreed to release the practitioners who had been arrested in Tianjin.

Ms. Xu said, “After I came overseas, I participated in every commemorative event of the April 25 Appeal. Falun Dafa practitioners are good people. I hope that the Chinese Communist regime will end the persecution soon.”

Maria, the organizer of the day’s activity, said, “We are here to tell the Chinese regime that we know why it persecutes Falun Dafa. Falun Dafa is good, but the regime spreads lies to deceive the international community. They believe that this gives them the excuse to persecute Falun Dafa practitioners. The persecution is still going on.”

She continued, “Falun Dafa guides people to let go of their pursuit of power, wealth and reputation, not to harm anyone and anything, and not to satisfy oneself at the expense of others’ interests. All those who want to learn about Falun Dafa only need to surf the Minghui website, and listen to Master Li Hongzhi’s lecture series. They will agree that Falun Dafa is good.”

Maria concluded by saying that more and more people now practice Falun Dafa. They abide by the principles of Truthfulness-Compassion-Forbearance. That is exactly how the CCP’s evil nature is becoming more and more evident.