(Minghui.org) Falun Dafa practitioners held activities near the Chinese Embassy in The Hague on April 25 to commemorate a peaceful appeal in Beijing 23 years ago. Later that day, they set up a booth at the city center to expose the ongoing persecution in China.

Protest at the Chinese Embassy

April is a peak tourist time in the Netherlands because the world-famous tulips are in bloom. Despite the rain that day, practitioners came to the Chinese Embassy in The Hague and peacefully exposed the ongoing suppression in China.

The activity started at 9 a.m. as practitioners did the Falun Dafa exercises. They displayed numerous banners worded “Falun Dafa is good,” “The world needs Truthfulness-Compassion-Forbearance,” and, “Stop the persecution of Falun Gong in China.” 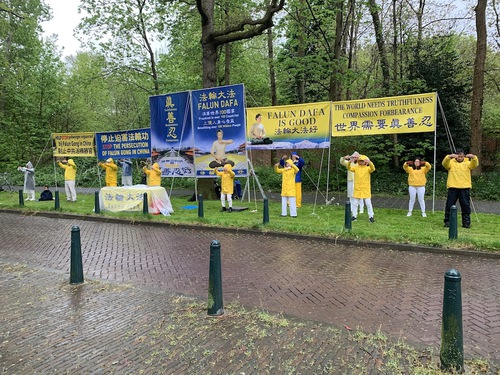 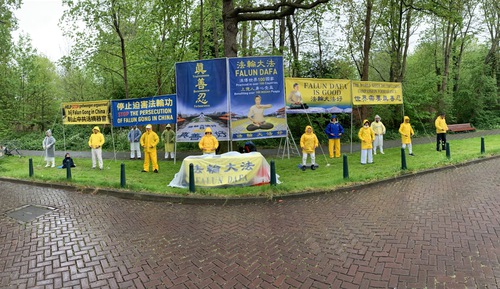 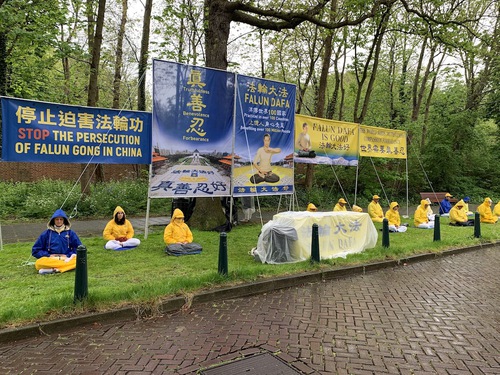 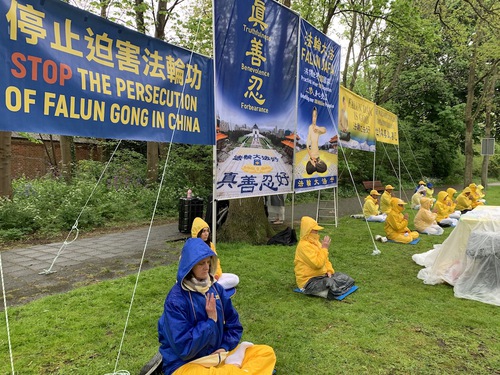 Falun Dafa practitioners demonstrate the exercises and display informational banners in front of the Chinese Embassy in The Hague on April 25, 2022

“But the Chinese Communist Party (CCP) began to suppress the group in July 1999 and the tragedy has lasted 23 years. Millions of Falun Gong practitioners have been discriminated against for their faith. Many were arrested, detained, and tortured and their families broken apart.

“We hope the CCP officials will listen to the facts instead of blindly following the CCP’s persecution policy. There is a Chinese saying, ‘Good is rewarded with good and evil meets evil.’ In fact, quite a few key perpetrators have met with consequences for their involvement in the persecution. From numerous political campaigns in the past, especially the Cultural Revolution, it is common for the CCP to choose scapegoats to execute to ease the public anger,” the letter continued.

In the end, practitioners called on ending the suppression and bringing former CCP leader Jiang Zemin to justice for initiating the persecution. Their letter also encouraged officials to quit the CCP organizations and avoid being implicated with the regime.

After talking with practitioners, several people who came to the Chinese embassy for paperwork agreed to renounce their memberships in the CCP organizations they’d previously joined.

Activities at the City Center

In the afternoon, practitioners went to the busy city center to tell people about Falun Dafa and how it is being persecuted in China. 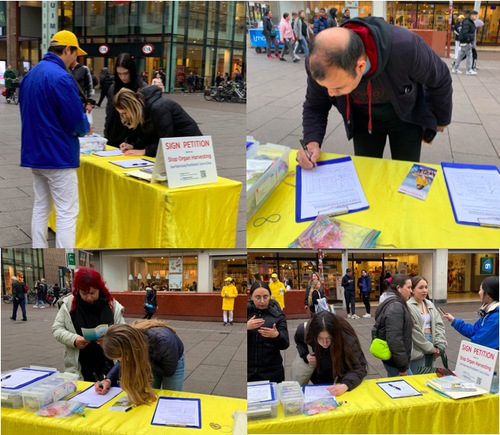 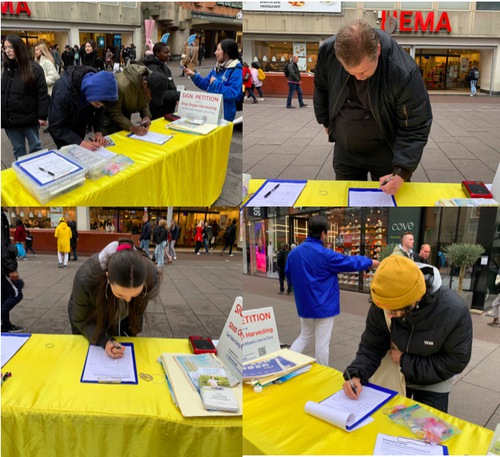 Passersby learn about Falun Dafa and sign the petition calling for an end to the persecution in China.

Upon seeing practitioners’ group meditation, Sophie said that the exercises were unique. “I also like the words Truthfulness, Compassion, and Forbearance, since they highlight the importance of moral values,” she said. “Life is short and we cannot just live day by day – rather, we need to take a break and think about what is most important.”

Sophie said that one example is Falun Dafa’s principle of being truthful. “If people lie to each another, society will end up in endless chaos. Only a world in which people are honest with each other can last long. The same thing goes with compassion,” she continued. “By suppressing such wonderful values, I think the Chinese communist government must have problems.”

Roos agreed. She said she could tell that Falun Dafa practitioners are good-natured and they would not harm others. “Truthfulness-Compassion-Forbearance are great and they bring us a better world. It is disgraceful that the CCP is detaining and mistreating Falun Gong.”

Betty was glad to see the words “Truthfulness-Compassion-Forbearance.” “The world is changing, and now there are fewer and fewer people in this world who are willing to help others,” she said. “That is why the virtue of compassion is so special. I don’t understand why the CCP would suppress Falun Gong, since a government is supposed to protect its people. The persecution should stop this year.”

Martinus said he learned from World War II that communism is a terrible regime. “Plus, Truthfulness, Compassion, and Forbearance are so important for our society,” he added. “Besides Falun Gong, the CCP is also suppressing Uyghurs – it is horrible!”

Telling Others About Falun Dafa and the Persecution

Tina was shocked to hear how badly practitioners were mistreated in China for their belief. “It’s absurd that things like this could occur in the 21st century and in 2022. Unbelievable!” she said.

After Maya heard about forced organ harvesting in China, she immediately signed a petition to stop the atrocity. Later in the day, she returned to the booth with her friend Savanna to sign another petition.

“The principles of Truthfulness-Compassion-Forbearance are great and very important,” Maya said. “Everyone should have his or her right to a spiritual belief. It is ruthless for the CCP to torture someone and kill that person for their organs.”

Savanna agreed with her. “I can tell that these values will have a positive effect on our society,” she explained. “I will also tell others about this. It is wrong for communist China to suppress or torture practitioners for their belief. Period. ”