San Diego: Falun Gong Practitioners Persevere in Clarifying the Truth With the Spirit of the April 25 Peaceful Appeal

(Minghui.org) To commemorate the 23rd anniversary of the peaceful appeal of Falun Gong practitioners in China on April 25, 1999, practitioners in San Diego, California held activities at Balboa Park and the USS Midway on April 23, 2022 to raise awareness of the persecution in China and collect signatures in support of the Falun Gong Protection Act.

Both locations were crowded that day. Many people stopped to read the banners and look at the display images. Some words on banners included, “Falun Gong’s 4.25 Appeal is a Moral Monument of Peace and Rationality,” “Falun Dafa is Good, Truthfulness-Compassion-Forbearance is Good,” and “Stop the CCP from Harvesting Organs from Practitioners.” 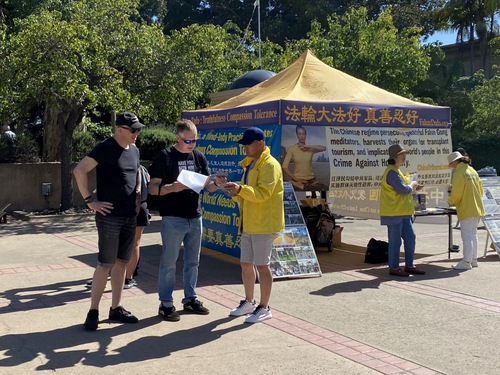 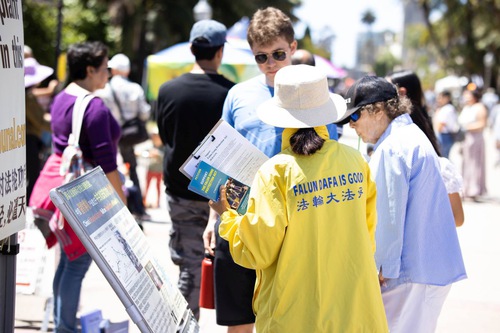 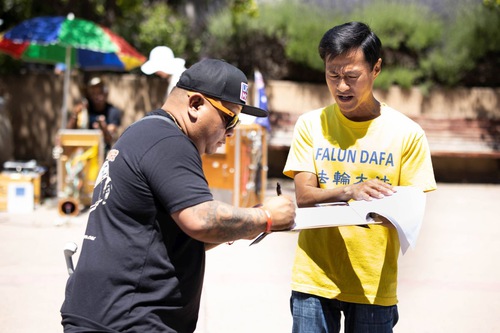 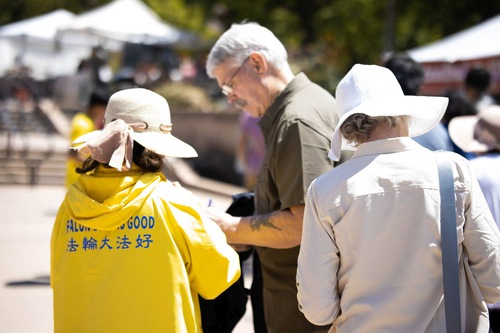 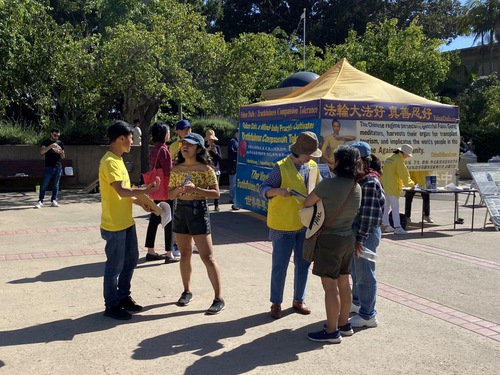 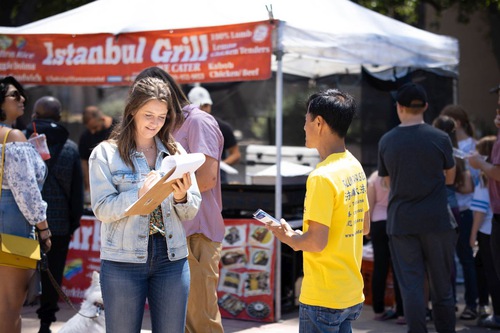 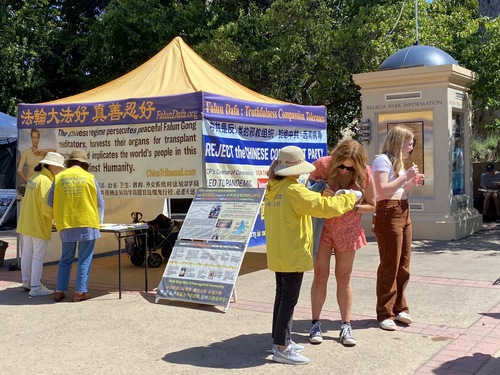 Practitioners in San Diego clarify the truth in Balboa Park on April 23, 2022 to commemorate the 23rd anniversary of the April 25 Peaceful Appeal. 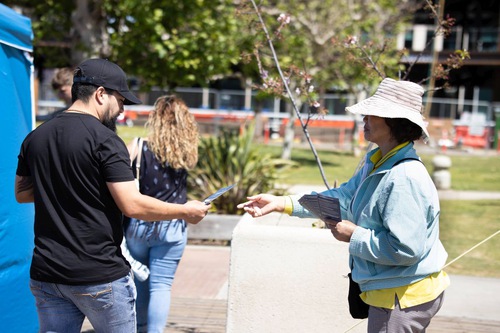 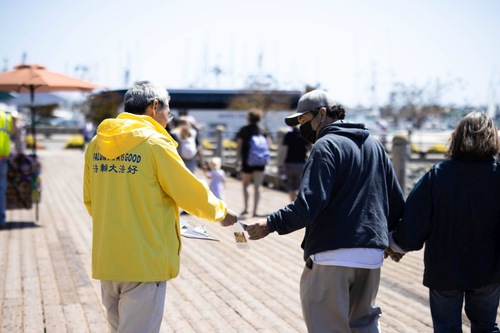 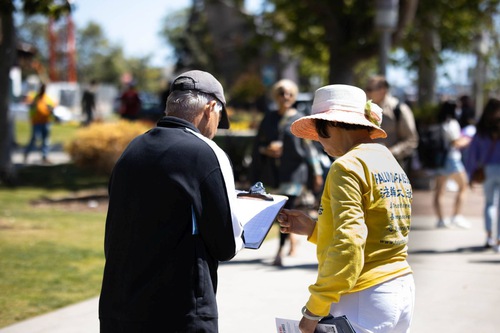 Practitioners in San Diego clarified the truth at the USS Midway on April 23, 2022 to commemorate the 23rd anniversary of the April 25 Peaceful Appeal.

A young security guard in uniform was patrolling at the USS Midway near the practitioners’ booth. He silently watched as practitioners set up their booth, hung banners, and talked to passersby. He later came over and signed the petition. He said, “My name is Kaleb. I’m new here in charge of security. Nice to meet you. I want to sign too.” 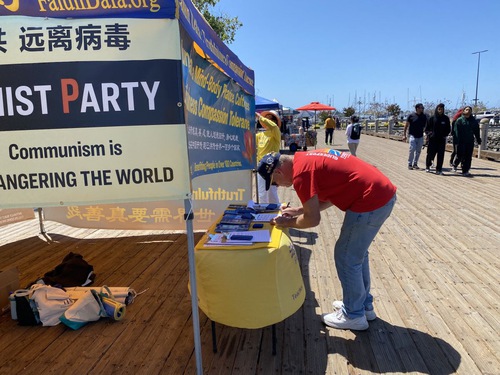 A practitioner explained the facts about Falun Gong to two young Chinese students, who listened attentively. They took the web address for the site where people can withdraw from the CCP and said they wanted to go online to learn more.

A group of six or seven people stopped at the booth. One of them asked, “I’ve heard about the CCP’s forced organ harvesting, and I feel it’s a bit hard to believe. Is it really true?” A practitioner explained in detail how the CCP harvests organs from practitioners while they are alive, what Falun Gong is, why the CCP persecutes the practice, and the CCP’s infiltration in the United States. After listening to the explanation, they all signed the petition.

A man who runs a local solar energy company came to sign, and said, “I know Falun Gong and I know what you are doing. This is very important. We must stop the CCP’s evil deeds now, otherwise our country will have no future.” 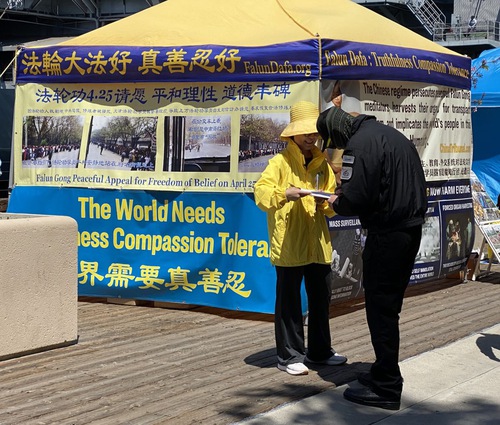 A man came to sign the petition and said, “ We must stop the CCP’s evil deeds now.”

Ge Kun, chairman of the Los Angeles branch of the China Democracy Party, saw practitioners’ activity at Balboa Park. She praised practitioners and how they were telling people the truth. “I think Falun Gong’s (practitioners’) activities are very good,” she said, “Doing this (clarifying the truth in scenic spots) can reach many tourists, from China or outside of China. This is a good way.”

Regarding the practitioners’ 23 years of peacefully exposing the persecution, Ge Kun said, “They (Falun Gong practitioners) are the most persecuted in China. Now when I see them overseas, I see them still doing what they have been doing, including continual coverage of the facts via newspaper reports. I feel really good about seeing that. After I came to the United States, what Falun Gong does educated me. I woke up. Otherwise we would have been deceived by the CCP! Now the Chinese people are more and more aware of facts. But we have to say, you have to be like Falun Gong, and you have to persevere.”

Practitioners in San Diego who were participating in the outdoor activities to clarify the facts to the public for many years said that the spirit of practitioners who participated in the April 25 appeal is a driving force. “Practitioners displayed their spirit of Truthfulness-Compassion-Forbearance during their peaceful appeal on April 25, 1999.” Practitioner Amei said, “Despite the CCP’s unfair treatment and cruel persecution, practitioners still follow the principles of Truthfulness-Compassion-Forbearance and explain facts to people with peaceful minds. The same mindset manifested during the April 25 peaceful appeal 23 years ago. Practitioners tell people the truth that the CCP is covering up, what Falun Gong is, and why the CCP persecutes it. The April 25 spirit has always inspired us to this day.”

The following day, April 25, some 10,000 Falun Dafa practitioners spontaneously gathered at the Central Appeals office in Beijing, as instructed by Tianjin officials. The gathering was peaceful and orderly. Several Falun Dafa representatives were called in to meet with Chinese Premier, Zhu Rongji, and members of his staff. That evening, practitioners' concerns were answered. The arrested practitioners in Tianjin were released and everyone went home.

Jiang Zemin, former head of the CCP, perceived the spiritual discipline's growing popularity as a threat to the CCP’s atheistic ideology and issued an order to ban Falun Dafa on July 20, 1999.