(Minghui.org) As Shen Yun tours the United States, not only have audience members expressed high regard for the artistry and profound culture presented in the performances, they also have begun searching into the spiritual faith mentioned in the songs and pieces: Falun Dafa. 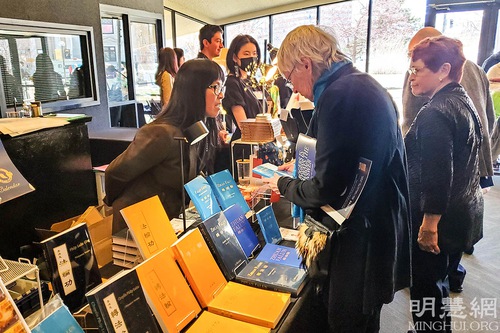 Since Falun Dafa’s main books were made available for sale in March at The David H. Koch Theater at Lincoln Center in New York during Shen Yun’s performances, the sale of Falun Dafa books also began in Reno, Nevada, on March 19 at the Pioneer Center for the Performing Arts.

Ms. Luo said that after seeing Shen Yun, many audience members felt touched by the divine spirituality portrayed in the performances. Some said they wanted to learn more about Falun Dafa and elevate their own spiritual level.

Ms. Luo said that some audience members asked, “Is this book the yellow book in the show?” When she said yes, “They happily purchase Zhuan Falun,” she said.

She also said that some audience members would open Shen Yun’s program, point at the picture of Zhuan Falun, and ask if she had this book, because they wanted to purchase one. 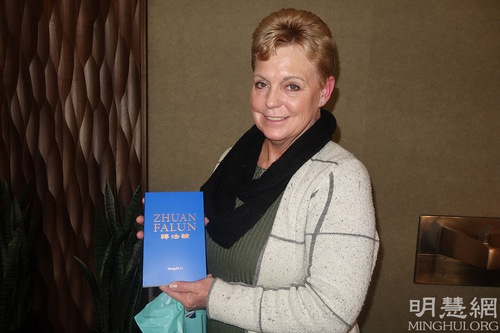 Dance instructor Teri McKinney and her new copy of Zhuan Falun at the Shen Yun performance in Reno, Nevada, on March 19. (The Epoch Times) (Minghui.org)

“I wish my dancers could have come... Just amazing skill; the clean lines were beautiful, the stretches are amazing, and how they were choreographed together was just amazing,” said Ms. McKinney.

“I think it was moving... that you’re holding on to that culture and the beauty of the culture and not letting them destroy it,” she said.

To learn more about the spiritual history of China, she purchased a copy of Zhuan Falun, the central text of Falun Dafa, from the Shen Yun Gift Shop.

Ms. McKinney is already planning to bring her dancers to next year’s performances.“I’m going to definitely suggest they come next year if they (Shen Yun) comes back to Reno... It’s incredible to see the symmetry of all of them moving together and flowing together as one,” she said. 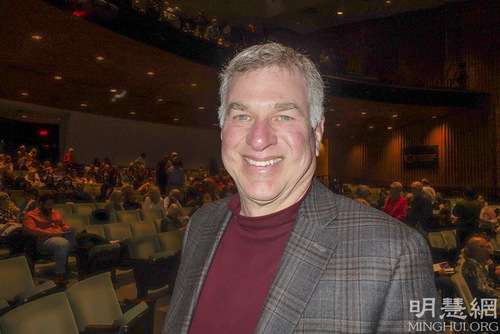 Ken Coll, Professor of Counseling and Educational Psychology at University of Nevada, Reno, at the Shen Yun performance in Reno on March 20. (Minghui.org)

Ken Coll, Ph.D., a Professor of Counseling and Educational Psychology at the University of Nevada, Reno, saw Shen Yun in Reno on March 20.

Mr. Coll said that he appreciated the spiritual aspect of the divinely-inspired culture portrayed in the performance.

“I especially liked the beginning piece, the one about the origin of humankind. I thought that piece was wonderful.

“Actually I want to learn more about Falun Dafa, the spiritual practice mentioned in the performance. I’ve heard of it before, but now I hope to learn more details... The principles of Truthfulness-Compassion-Forbearance are very outstanding,” he said.

Mr. Coll would like to say to Shen Yun’s Artistic Director and artists, “Shen Yun is an extraordinary performance. It is a magnificent gift to the world.”

According to Ms. Luo, many audience members asked what the book, Zhuan Falun, was about. Ms. Luo would tell them, “This is a book about cultivation. The principles of Falun Dafa are Truthfulness-Compassion-Forbearance. Practicing Falun Dafa can benefit both the body and mind. Especially right now during the COVID pandemic, the positive energy (from practicing) can help people strengthen their immunity.”

“After they hear this, they are happy and agree. They then purchase Zhuan Falun,” she said.

Balli Stackpole, who works in medical billing, purchased the book Zhuan Falun. She said that her work brings her a lot of stress.

“I want to learn more about Falun Dafa and its history. I just learned to meditate. I hope to read Zhuan Falun. I hope I can calm down and balance busy work and life well. And at the same time improve my physical and mental health,” Ms. Stackpole said. 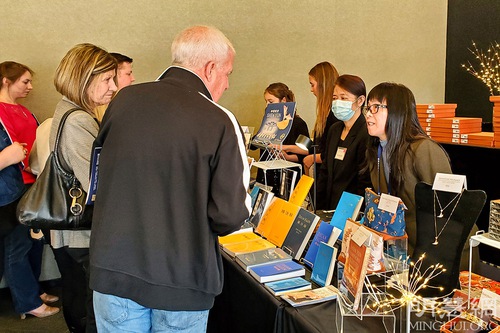 Doug Hamrick, who works in the transportation industry, said after seeing Shen Yun, “The performance was fascinating. Not only because of the gorgeous colors and beautiful dancing, but the stories were also very enchanting and inspiring. Shen Yun is a gift to everyone. This is very worth looking into and also use as guidelines for daily life.”

Mr. Hamrick also bought the book Zhuan Falun at the gift counter. “I want to learn more about Falun Dafa. I want my life to be more fulfilled,” he said.

He mentioned that his grandfather was a priest. He spent a lot of time learning about different religions and faiths. “I think people should stay open-minded. The Creator is everything. Everything has its meaning. I like Truthfulness-Compassion-Forbearance, and besides these, do we need anything else?” he said. 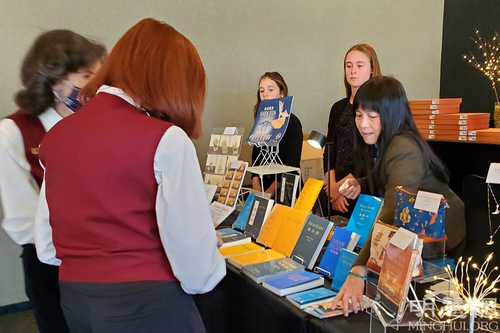 “This Is What I Want”

Ms. Chen, another attendant at the gift counter, said that when she learned that Falun Dafa books were going to be sold at theaters during Shen Yun performances, a thought came to her mind: people buying the books are coming. Predestined people are coming to look for Dafa. She said that before the performance even started, four or five audience members came and bought copies of Zhuan Falun.

Ms. Chen said she introduced Falun Dafa to a lady using a booklet, and told her that Falun Dafa’s principles are Truthfulness-Compassion-Forbearance, and that practicing can help people reduce stress and anxiety and improve both the body and mind. The lady said, “This is what I want.”

Three audience members who were of Native American descent also purchased Zhuan Falun. They said that they were very interested in Falun Dafa and wanted to learn it. They also said that they very much liked Dafa’s principles of Truthfulness-Compassion-Forbearance, and that they looked forward to reading Zhuan Falun.