(Minghui.org) Today's news from China includes incidents of persecution that took place in 12 cities or counties in 8 provinces, where at least 21 practitioners were recently persecuted for their belief. 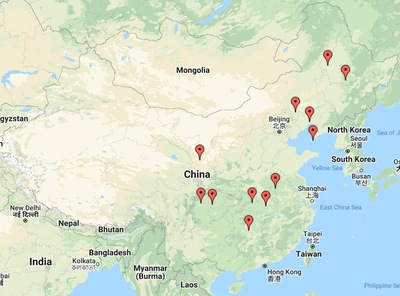 Mr. Liu Sizu was arrested on the afternoon of December 30, 2021, when he was outside. His home was ransacked and his computer and other personal belongings were confiscated.

It was learned recently that his case was submitted to the Xixia District Procuratorate by the Xingqing District Police Department in late March 2022. Mr. Liu is currently detained in the Yinchuan Detention Center.

The practitioners with the surnames Hai and Zhang from the Yingdong District were arrested by officers from the Xieqiao Police Station in Yingshang County on March 31, 2022, for distributing truth-clarifying materials in Xieqiao Town. The police ransacked Hai’s home. Hai was released but Zhang is still detained.

Ms. Liu Hongxia has been on a hunger strike since February 14, 2022. She is very weak and is currently in the Xinhua Hospital. She is still scheduled to be tried in the Ganjinzi District Court after the COVID pandemic is over.

Ms. Yue Shuxia and her daughter Ms. Li Xiurong were arrested around 4 p.m. on March 31, 2022, for talking to people about Falun Gong.

Mr. Ning Tieqiao was arrested and sentenced to four years in prison in March 2004 for distributing information about Falun Gong. He was released in March 2008.

Mr. Ning was constantly harassed by the local 610 Office after his release. His home on Longqiao Road in Shaodong County was ransacked by police in November 2018.

Mr. Ning suffered a stroke a few days ago and is now in the ICU of Shaodong People’s Hospital.

Two female officers from the Sui’an Police Station of Yingshan County went to Wen Maoqun’s home on March 29, 2022. They photographed the place while they were there.

Ms. Chen Jiazhi and Ms. Min Ruyi were arrested by officers from the Huangzhuang Shuilu Police Station on March 16, 2022. They were detained for 15 days in the Zhongxiang City Detention House.

Both practitioners were placed under official arrest on April 1, 2022. They are currently detained in the Pailou Detention Center of Jingmen City.

Ms. Zhou Ailing from Qiaokou District has been detained in a brainwashing center. She was pressured to sign a guarantee statement. She was told she will not be released if she does not cooperate. Her husband is so worried about her that he became ill and is hospitalized.

Ms. Yang Yurong from Xigao Town was arrested by two officers from the Majing Town Police Station in Shifang City around 9 a.m. on March 1, 2022. They were released later that day.

Five practitioners in their 70s from Fuyu County were arrested at their homes by officers from the Tiedong Police Station in Fuyu County on the morning of March 16, 2022. They are Liang Xiumin, Shi Changji, Mr. Zhou Chuanliang and his wife Ji Mouhua, and Zhang Yuping. Except for Shi Changji, the other four practitioners were placed under 10-day detention. They were released later that day because of the COVID pandemic.

The practitioners’ homes were ransacked. The police confiscated a tablet and a computer from Liang Xiumin’s home, five or six speakers with memory cards from Zhou Chuanliang’s home, and numerous Falun Gong books from Zhang Yuping’s home.

Ms. Guan Xiaofen from Acheng District was reported to police when she distributed information about Falun Gong in Yagoujixiang Village. She was arrested by officers from the Yagou Police Station on the afternoon of April 1, 2022. Her home was ransacked.

Mr. Tong Yueliang was released from the No.1 Prison of Shenyang City on March 27, 2022, after being detained in prison for five years. He has returned to his home in Goubangzi Town, Beizhen City.

Mr. Tong is a teacher in Changxingdian Town, Beizhen City. He was arrested on March 20, 2017, and was sentenced to five years in prison and fined 20,000 yuan by the Beizhen City Court on February 2, 2018. He was taken to the Liaoxi Newcomer Prison in early June 2018 and was later transferred to the No.1 Prison of Shenyang City. His family found out on June 28, 2018, that he is nearly blind in both eyes. However, the prison official said that Mr. Tong would not get any medical treatment unless he transformed.