(Minghui.org) Over the years, Falun Dafa practitioners would often be seen at the Liebfrauenkirche, a Gothic-style Catholic parish church, located in the center of Frankfurt, Germany.

Practitioners gathered once again at the Liebfrauenkirche on February 26, 2022. They set up a booth, hung banners, demonstrated the Falun Dafa exercises, spread the preciousness of the practice, and exposed the Chinese Communist Party’s (CCP) crimes of persecuting Falun Dafa practitioners to local residents. The event attracted the attention of many locals. 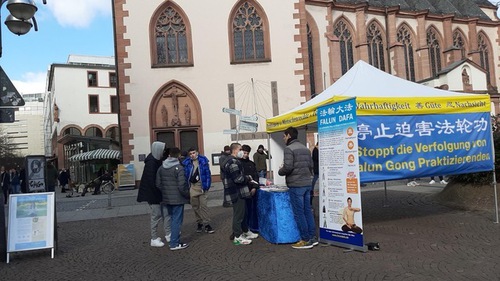 Local residents, as well as university students would stroll and gather at the plaza on weekends to enjoy their leisure time. Although the spring weather was fairly chilly, many people were still seen at the plaza.

Falun Dafa practitioners did the exercises, while others distributed flyers and talked to passersby to raise awareness of the ongoing persecution in China.

Many passersby stopped and inquired about the practice. Their main question was,“Why is the CCP persecuting Falun Dafa?” Upon learnng about Falun Dafa and how practitioners abided by the principles of Truthfulness-Compassion-Forbearance, many were appalled by the persecution. They signed the petition condemning the CCP’s atrocities. 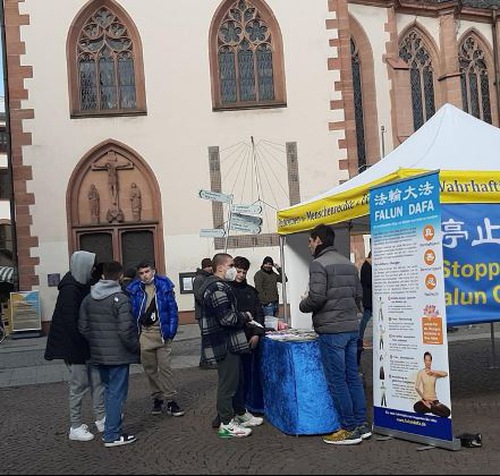 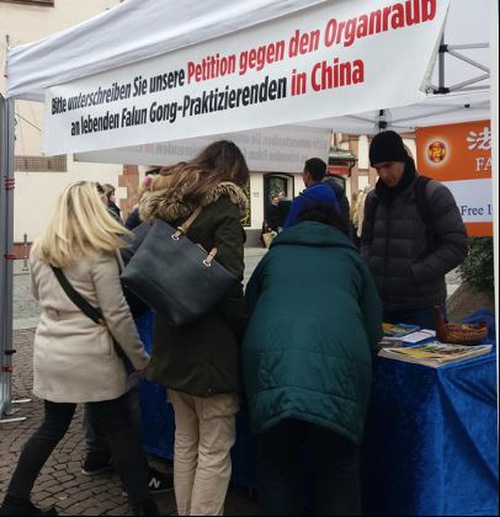 A man and his daughter were shocked to learn of the brutal persecution, especially the CCP’s crime of harvesting organs from imprisoned Falun Gong practitioners for sale to transplant patients. He asked, “Can you say that again? Do you mean that they are truly harvesting organs from living people? Why is this happening?”

A practitioner explained that the CCP practices violence, and instills lies into people, while Falun Dafa practitioners follow the principles of Truthfulness-Compassion-Forbearance. The man nodded in agreement. The practitioner continued, “During the end of the 1990s, there were hundreds of millions of people practicing Falun Dafa. However, due to the jealousy of Jiang Zemin, the former head of the CCP, he mobilized all of China’s resources to launch a nation-wide persecution campaign against Falun Dafa. The man said, “I cannot believe this is being persecuted. I want to sign the petition to help stop the atrocities.”

While the man was signing the petition, his daughter was attracted to the calming music and began to imitate the exercise movements. The man expressed his gratitude towards practitioners for letting him be aware of such a persecution happening in China. He praised practitioners for their efforts and their persistence. 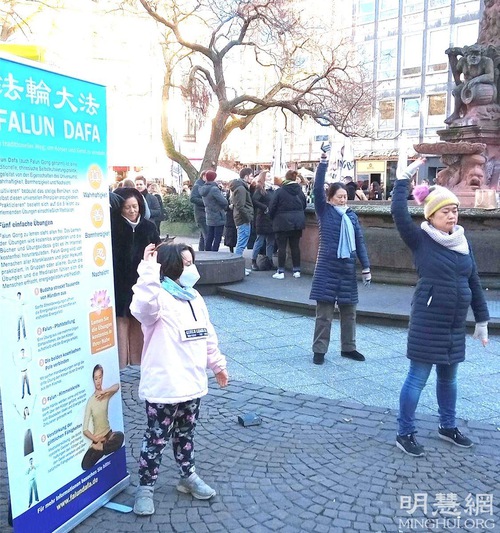 While a man was signing the petition, his daughter began following along to learn the Falun Dafa exercises movements.