(Minghui.org) Seven Shen Yun Performing Arts companies are touring North America and Europe, presenting traditional arts and values in their purest form. As audience members are impressed by the strong positive energy, perfect cooperation, and vivid portrayal of divinity in the performances, many have asked about the spiritual practice that made all this possible – Falun Dafa. 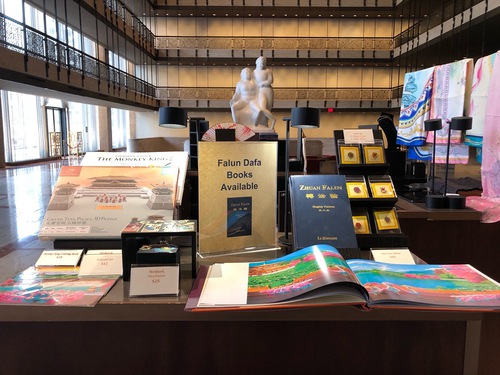 Shen Yun’s gift stand at the The David H. Koch Theater at Lincoln Center during the performances in New York City from March 10–20, 2022. The stand also offered the books Zhuan Falun and Falun Gong. Over the years, a number of audience members ask what “Falun Dafa” is. (courtesy Shen Yun gift stand staff)

During the Shen Yun New York Company’s ten performances at the Lincoln Center in New York City, many audience members said that they walked out feeling that their “divinity” was awakened. A number of audience members purchased Falun Dafa books and Falun pins before leaving the theater.

According to staff at the Shen Yun gift stand, this year, they prepared for audience members the books Zhuan Falun and Falun Gong, Falun Dafa’s main literature. Over the years, many audience members have asked what Falun Dafa is.

The staff also said that among the audience members that purchased the books, some said that, “Shen Yun displayed the glory of the divine and awakened (their) divinity”; others said they wanted to learn more because they could see a gentle radiance coming from the artists and felt that Shen Yun performers were a group of genuine cultivators; some said that “Shen Yun souvenirs would become priceless treasures in the future”; some were eager to purchase the Falun pins after learning that the nine characters on the back of the pins meant “Truthfulness-Compassion-Forbearance is Good” and “Falun Dafa is Good”; one young audience member said she was certain that, “This book (Zhuan Falun) can change my worldview.” 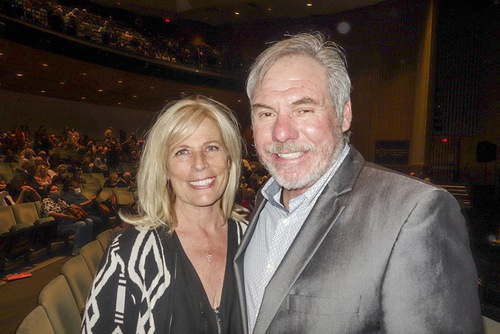 Bart and Susan Marks at the Shen Yun performance in Reno, Nevada, on March 20. (The Epoch Times)

Bart Marks, the president and founder of Fire and Ice Diamonds, and the CEO of Rogers Jewelry Co., saw Shen Yun with his wife Susan in Reno, Nevada, on March 20.

Mrs. Marks was also impressed and said that as she watched the performances, “Not only could I feel their energy, I could also feel a strong shock to the entire body and mind.” She especially liked the last piece, where heavenly beings descend to the human world to save kind people.

Mr. Marks agreed. “Interestingly, because we’ve been talking about meditation and want to stay consistent with the universe, this was like destiny,” he said.

He also said that his understanding of the lyrics of Shen Yun’s songs was, “You can’t take material things with you. They won’t go with you to the next life.” Watching Shen Yun made him feel that he was, “connected with beings stronger than myself.”

Mrs. Marks wanted to express her appreciation to Shen Yun’s Artistic Director and artists: “I want to tell them that I really appreciate them. I like their choreography, their message. It would be so amazing if Shen Yun could perform in China.” 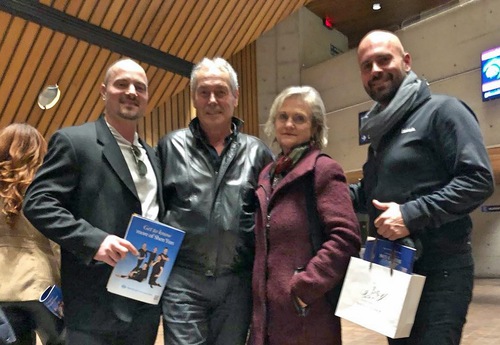 “The Shen Yun performance was so magnificent,” Philip said. He also said that many small stories in the show were very touching.

“One of the stories was about Falun Dafa. After watching it, I’m planning on reading this book Zhuan Falun,” he said. He purchased the book Zhuan Falun at the gift stand after the performance.

“I feel like this book is calling me. When I saw the name of this book and heard Falun Dafa, it reminded me of some articles I read in the past. So I’d like to learn more about it.

“After experiencing a big change in life, I’ve been searching during these past six years. I’ve explored many different kinds of spiritual faiths,” Philip said.

Philip’s brother, Niko Sofianos, also enjoyed the performance. “We’re honored that we were able to come to Hamilton’s First Ontario Concert Hall to see Shen Yun. We both thought we should bring our parents to see it. After seeing it, we also feel happy about having done this,” Niko said.

“The emcees shared with us the meaning of the name Shen Yun: the beauty of divine beings dancing. The inner beauty presented by Shen Yun really moved me.

“Shen Yun transmits hope to us. No matter what moment we’re in, as long as we remember and follow the values of kindness and compassion, we can improve our spiritual level, and thus overcome hardships,” Niko said.

“Solved All the Questions” 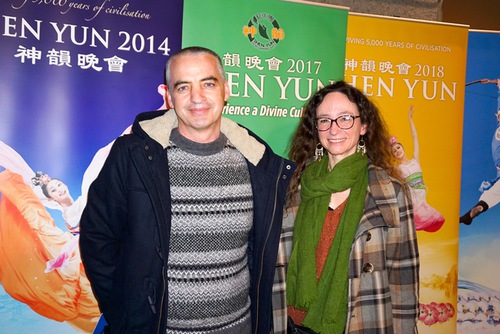 Franck Bernico and Karine Anneheim at the Shen Yun performance in Nantes, France, on February 17. (The Epoch Times)

“[I’m] very surprised to see a show like this. So wonderful,” Mr. Bernico said.

“We’ve gone through a lot of tribulations in this past year, on top of the pandemic... But after seeing the performance, it feels like the mental wound caused by the difficulties and tribulations we’ve encountered before was gone all at once.

“This show seemed to have solved all the questions we had in our minds... When the performers were enjoying teamwork after the entire show, performers, and orchestra formed a whole, that joy coming from their heart was like a kind of energy, which made me feel this warmth and happiness that I can’t describe. The heart was very comforted.

“The theme told by this performance really touched me. Wisdom is a kind of vision of looking at things. This kind of vision can lead people onto a path that they should be, just like a guide. All these dances took us on a trip. On this trip, divine beings and divinity were very important. It’s full of the positive energy of calling souls. Very good,” he said.

After the performance, they purchased a set of Falun Dafa books in French.

“I Have Experienced the Presence of God” 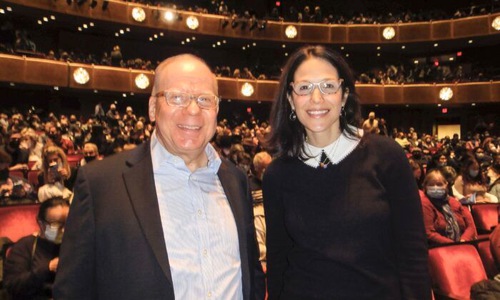 Father William Elder and Lisa Petrucco at the Shen Yun performance in New York City on March 12. (The Epoch Times)

From the moment they arrived at their front orchestra seats, William and Lisa said they felt a “divine presence” in the theater.

It was Father Elder’s third time seeing Shen Yun for “the sheer beauty of it and the glories of all these different cultures that just have been suppressed by the communists,” he said. He expressed appreciation for Shen Yun’s efforts in preserving the traditional culture of China, which has been systematically attacked by China’s communist regime.

“It’s great to see that they (the traditions) are being kept alive and we hope they’re going to contribute to the development of culture in the future,” said Father Elder.

It was Ms. Petrucco’s first visit, a birthday present. She came not only to appreciate and support the arts, but because she heard that Shen Yun presents China as it was before communism. “I think it’s so important right now that people have their freedoms and that’s why I came to see it, to support the movement to be here and just to see the beauty of the dance,” she said.

Above and beyond the beautiful staging, costumes, and music, Ms. Petrucco found that the performers themselves exude extraordinary goodness.

“You could see there’s something that they do, the radiance, and I really felt like it was prayer together—I think that’s so important for synchronizing their performances and just something about the inner beauty of them. They had this very sweet, very compassionate energy. They weren’t just ‘hey look at me, I’m on Broadway’ which I’ve seen in Broadway shows,” she said.

Father Elder also spoke about the spirituality presented in the performance. “The deep spirituality of it is something that really impresses me—belief in the divine, belief in the goodness of human beings, especially in the face of communism and all that they’re doing, it’s just so amazing,” he said.

“When God is present, he does things for people. He can heal them, he can do all sorts of things... But even just the beauty and the joy people experience, that ultimately comes from God also,” Father Elder said.

Ms. Petrucco felt restorative energy from the performance that was “very strong,” unlike an ordinary performance.

“I think that people can experience the healing. When you come to something like this, your mind is going to slow down a little and you’re going to relax, you’re going to tune out all the noise, so there’s an aspect to it that’s just entertainment, but when you’re talking about this particular performance, there’s something extra... When you’re open to having God’s presence come inside of you and heal you, you can really experience it,” she said.

Father Elder left the theater feeling that his outlook on life has “been renewed.”

“I feel happier, I feel more committed to God, and to serving people and to building up culture and building up civilization,” he said.

After the performance, both Father Elder and Ms. Petrucco purchased Falun Dafa books.