(Minghui.org) On July 20, 1999, Jiang Zemin, former leader of the Chinese Communist Party (CCP), launched the persecution of Falun Gong, a mind-body practice also known as Falun Dafa that is based on the principles of Truthfulness-Compassion-Forbearance. Since then, countless Falun Gong practitioners have been arrested, sentenced, and tortured for their faith in various detention centers, labor camps and prisons.

One of the most notorious prisons for abusing Falun Gong practitioners is Shandong Province Women’s Prison.

Most Falun Gong practitioners detained in the prison are kept at Division 11. It has an independent three-story building with a small courtyard, and is separated from other buildings.

Xu Yumei is head of the prison’s Division 11, and the other two deputy heads are Sun Li and Zhao Liyun. There is another instructor named Feng. Xu has been working in the prison for 12 years and has accumulated experience of many cruel tactics over the years. She was promoted from a deputy head to head of Division 11 in 2019 for her active participation in the persecution.

Though Xu is not personally involved in persecuting the practitioners, she instructed the inmates to do so and would try to deceive the practitioners and attempt to make them "transform" when they were mentally breaking down from the torture. Xu instructed the guards to learn about each practitioner’s situation and compile the information to target them individually.

Below are some specific torture methods used in the prison.

Ms. Lv Guiling of Weihai City served two terms at Shandong Women’s Prison. She was released three months after she went on a hunger strike. Four years later in November 2008, she was arrested and taken to the prison. She shouted “Falun Dafa is good” and was placed in solitary confinement.

Ms. Cui Ling of Qingdao City was sentenced to four years in 2005. Because she refused to give up Falun Gong, the guards began to beat her three times every day when she only had one month left to serve. They hit her again a day before her release when she shouted “Falun Dafa is good.”

Ms. Li Li, 49, of Pingdu city, was sentenced to three years on October 11, 2017. She was previously sentenced twice to four years each and held in a forced labor camp for two years.

In December 2017 when Ms. Li was sent to Shandong Women’s Prison the third time, she shouted “Falun Dafa is good” upon arrival. The guards locked her in a bathroom, which did not have a surveillance camera, and four inmates took turns torturing her.

The inmates used a cloth to make a bump and rubbed her mouth each time she shouted “Falun Dafa is good.” When her brother visited her, he saw scars around her mouth and the wounds didn’t recover for a long time.

Ms. Li was tortured in the bathroom for about two weeks. 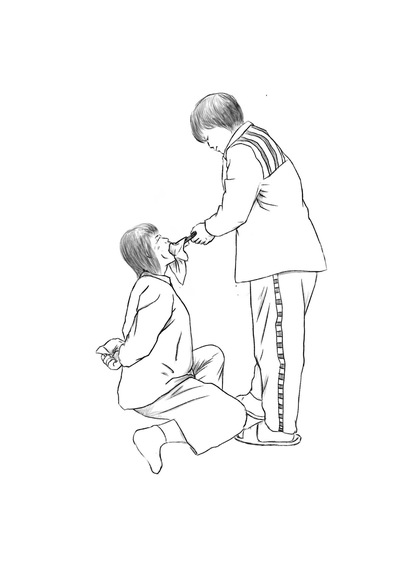 To prevent the practitioners from shouting “Falun Dafa is good” in protest of the persecution, the inmates often swirled shoe brushes and stuffed rags into the practitioners’ mouth, causing the entire mouth to fester and bleed. They also pushed the rag down the throat, making the practitioners want to vomit all the time. 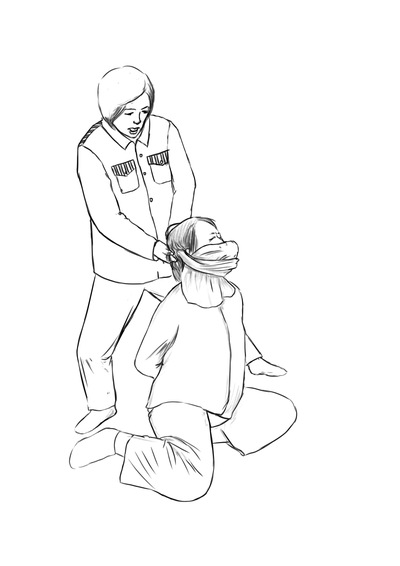 Torture illustration: Stuffing the mouth with rags, twisting a towel around the neck

After gagging the practitioners, they knotted towels around the face and head, twisting the knots hard to inflict pain. A lot of hair was caught while they twisted the towel, and that part of the scalp usually ended up with blisters. They twisted and pushed hard, aiming to suffocate their prisoners.

The guards often exposed those who refused to renounce their faith in Falun Gong, to freezing cold temperatures. Some practitioners were stripped of their clothes and doused with cold water from the head to the toe. 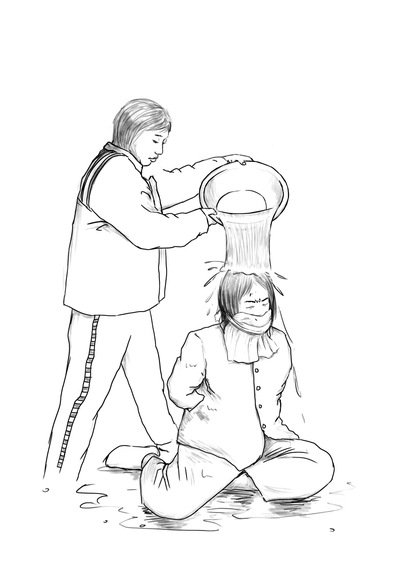 Ms. Jiang Tao of Pingdu City was sentenced to three years in October 2017. She was taken to the prison in January 2018. When an inmate tried to force her to write guarantee statements, she refused and was tortured. The inmate forced her to sit still and look straight ahead without moving. The windows were opened during the winter to expose her to the cold. Once, the inmate doused her with cold water and stomped on her toes until they were bruised.

Ms. Gao Mingxia of Qingdao City refused to be transformed and was locked in solitary confinement. Xu opened the windows during the winter and splashed water on the ground to freeze Ms. Gao.

Ms. Wang Guohong of Laixi City was tortured for eight days. She was deprived of sleep, forced to stand, and forbidden from using the restroom or washing herself. At night, the windows were opened to freeze her. If she closed her eyes, an inmate would spray cold water on her face.

Ms. Li Li experienced a similar torture. An inmate once tortured her on a freezing cold winter day until midnight. Then she poured two basins of cold water over the top of Ms. Li’s head. She was wet all over and immediately began to shiver. The inmate opened the window to freeze her even more. Ms. Li was forced to sleep in the wet clothes with her mouth still gagged and covered with a towel. The windows were opened the entire night.

Forced to Do the Splits

In the building, there are two small dark and soundproof rooms on the second floor that are less than two meters wide and less than five meters long. The walls are covered with thick materials, even the squatting toilet is also wrapped with the materials. There are no windows, and no sound can be heard from the inside even when standing outside the door. The room is used by Xu and other guards to torture practitioners who refuse to renounce their faith.

There is a strong and suffocating smell of formaldehyde in the small dark rooms. The smell makes it difficult to open the eyes. The strong odor even expelled the flies and mosquitoes. The stench remained strong for over ten years, worsened by a toilet that is seldom flushed.

During the winter, practitioners are not given any blankets and the windows along the hall are opened; even the door of the small room is opened halfway, causing the room to become icy cold.

During the summer, all windows are shut, including the door of the small room, turning the room into a sauna room. Tough inmates who were sent there were on the verge of collapsing after staying for two days, but Xu locked a practitioner in the room for three years. An inmate once said that the room was filled with various torture instruments and snakes and insects to be used on steadfast practitioners.

Ms. Yi Shuling of Mengyin County was locked in the room for doing the Falun Gong exercises. An inmate stepped on Ms. Yi’s hands, as Xu promised to give them merit points for torturing her.

Ms. Yi was locked in the room for nearly a month and prohibited from doing the exercises. She was forced to do leg splits while three other inmates placed the legs under the stool and sit on it. They also lifted up Ms. Yi’s arms while another sat on her back and held her throat to prevent her from shouting “Falun Dafa is good.” While Ms. Yi’s hands and legs were bound, one of her high school classmates tried to break her fingers. 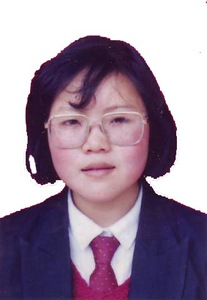 In December 2017, the third time Ms. Li Li was sent to prison, she was confined in a padded, soundproof solitary cell on the second floor. The windows were sealed, and the cell was dark. The pungent smell of the padding made it hard for her to breathe and caused her headaches.

An inmate told her that many practitioners gave up their belief because they could not stand the confinement. She decided to meditate with her legs crossed to keep her mind alert. When an inmate saw her meditating, she instructed the other inmates to spread Ms. Li’s legs into a split position. Two inmates each took a stool and put each of her legs under one stool. They each sat on one stool and constantly moved the stool backward so her legs split more. The tendons on her inner thighs were in excruciating pain. An inmate, who was a dancer, told the other inmates that this position won’t break the legs.

Many practitioners were forced to do splits. Some inmates even used dirty toilet brushes to scrub practitioners’ heads, faces, and mouths. Two inmates lifted the practitioners up and threw them to the ground, pinched, twisted, and hit their armpits and thighs. They also used brushes to poke the practitioners’ private parts. Screams can be heard during the night and often, papers or clothes stained with blood were seen in the garbage bags thrown out by the inmates. 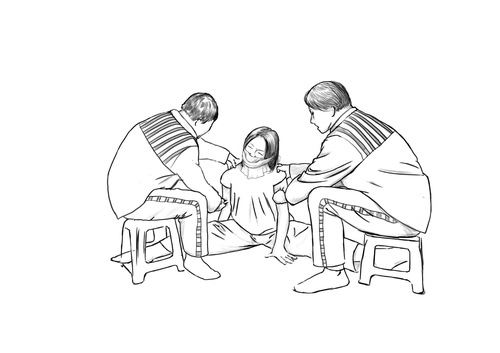 Torture illustration: Forced to do splits 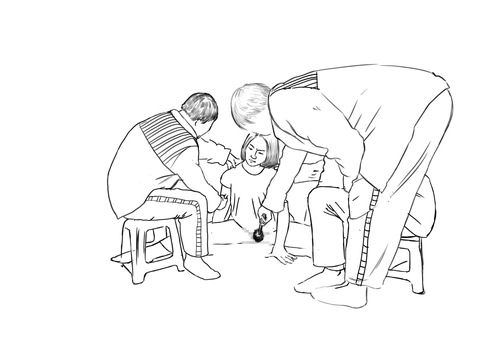 The inmate also used the brush to poke the practitioner’s private part harshly. 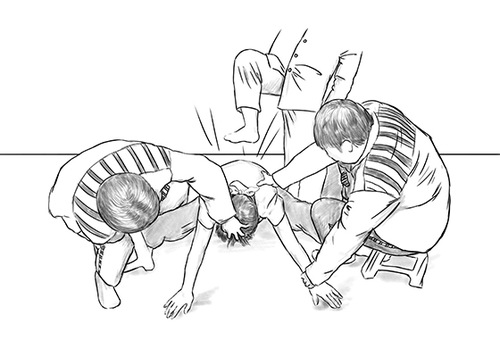 Torture illustration: With the legs forced apart as far as possible, the back and head are painfully forced down toward the ground.

Sometimes, one inmate pushed the practitioner’s upper body down to the ground and stomped hard on the back. 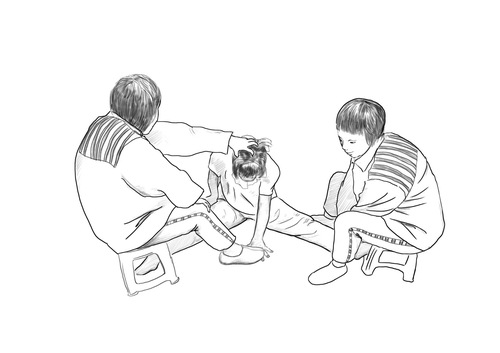 Torture illustration: Crushing the fingers and the backs of the hands while forced to do splits

The inmates also stomped on the practitioner’s hands and crushed all the fingers and the backs of the hands, causing both of the hands to become black and purple afterward. The practitioner continued to experience pain in the finger joints after leaving the prison.