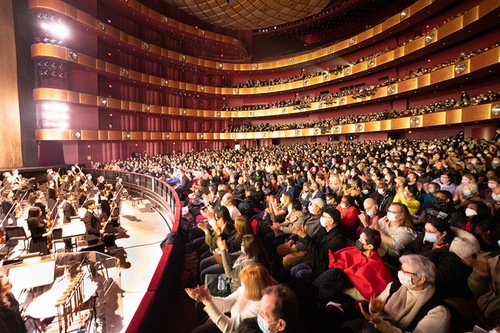 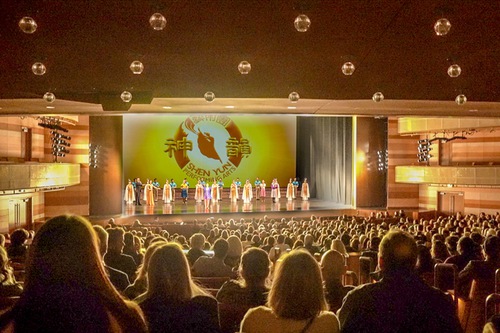 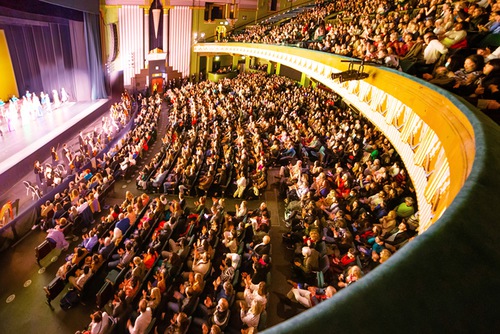 The Shen Yun World Company played to a full house at the company's last of 15 performances at the Eventim Apollo in London on March 13. (The Epoch Times) 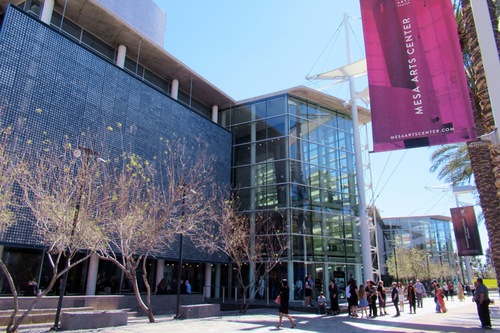 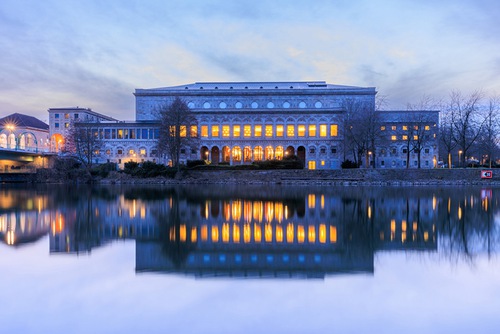 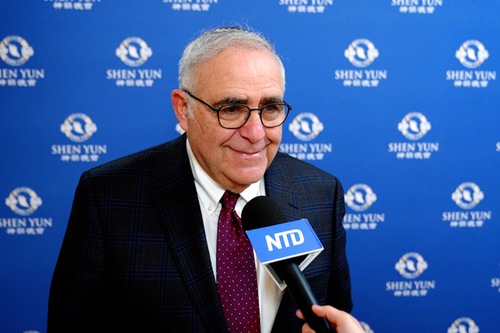 “It’s a universal inspiration... I felt uplifted by it.

“The music is wonderful, and the orchestra is wonderful. The singing and the production values are great.

“I think mostly what’s wonderful is the values that are expressed, for many of us, are universal values... The values here are clearly about human dignity and about not being drawn down into the worst part of society, but trying to elevate society. And that’s visible in wonderful ways here,” he said. 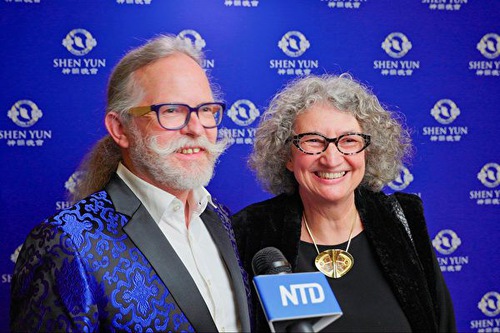 Jürgen Heinrich Block and his wife at the Shen Yun performance in Mülheim an der Ruhr, Germany, on March 12. (NTD Television)

“I think the performance shows excellent art, whether it's the movements, facial expressions, or the cooperation with the music. The combination between Chinese instruments and European music is extremely spectacular. Of course there's also the technology, the combination of overall 3-D visual effects with art, aesthetics, and dance. It is a very magnificent performance,” said the award-winning artist who has studios in both Germany and Italy and has had art exhibits in numerous areas around the world.

“The beauty of art, education, culture, the care and help among one another, all these contents were presented. These are suppressed in China. The expressiveness of the performance is extremely strong.

“Shen Yun is influencing the world and letting people remember things that they're losing more and more. These are values and principles. I laud and admire Shen Yun's courage in calling for and presenting these messages, and by using a very elegant, reserved, and subtle way,” Mr. Block said. 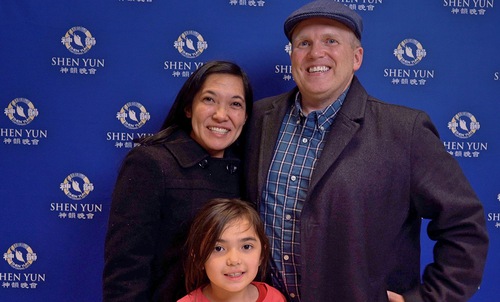 Ronald Schoedel with his wife and daughter at the Shen Yun performance in Salt Lake City, Utah, on March 9. (NTD Television)

Ronald Schoedel, an attorney and a professor at Brigham Young University, saw Shen Yun with his wife and daughter in Salt Lake City, Utah, on March 9.

“We had a lovely time. It was absolutely brilliant. I think the colors, the costumes, the choreography, the dancing—all of that was very, just aesthetically astounding,” Mr. Schoedel said.

“I think also, there’s a really beautiful, spiritual, and emotional element too that I really appreciate. I think it touched me,” he said.

“Something a Lot of People Could Benefit from Seeing” 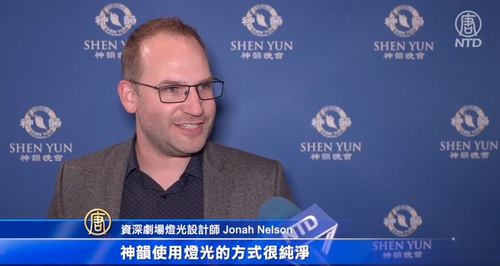 “It's very purist in how it's done. It allows the costumes to be very vibrant. And that is really exciting to watch I think. And the projection in the background, it really pops. So from a lighting standpoint, they've done really well, balancing the difference between the lights and the performers, and the projection in the background without compromising either one,” Mr. Nelson said.

“I think what it's bringing is it's allowing the audience to see all the performers at once. So much of the movement is these beautiful, choreographed movements that have very broad patterns. They're all in a line. They're all moving in sync together.

“I think the message overall in the show is very striking. I think it's one that we all should really take to heart. There needs to be a deep understanding of what's happening in China.

“I think it's important for people to get outside their comfort zones and see new things. And certainly this is something that a lot of people could benefit from seeing.

“Whoever composed these pieces was very thoughtful about storytelling. The different voices, the different movements, the different emotions that they're trying to convey. And I think between those two, you get, again, it's a beautiful production that, really is, between the orchestra and the dancing. Those work very very well together,” he said.

He was also impressed by the performance of the soprano. “What a powerful voice. I think not only in her singing voice but certainly the message that she's bringing to the audience. And I think a lot of people should come and see this show and see the message that this show brings. It's very important for more people to know that,” Mr. Nelson said.

“Absolutely Blown Away and Touched” 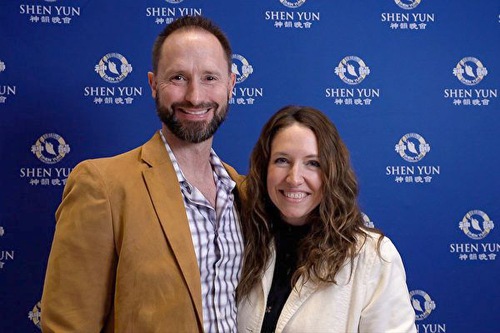 April Grandpre, a singer-songwriter, and her husband David Grandpre, the director of product management and marketing at Novarad, saw Shen Yun in Salt Lake City, Utah, on March 11.

“Oh, so inspiring... I have watched for years, the billboards and the advertisements for it, and I’ve always wanted to come. So I was just absolutely blown away and touched watching this. I think for anybody who loves art or music, or anybody who doesn’t—I don’t know how you wouldn’t love this because it was just so powerful. And the power of the music and the dancing. It was just, I mean, mind-blowing,” Mrs. Grandpre said.

The Grandpres saw Shen Yun for the first time. They felt inspired after watching China’s rich cultural heritage, which was divinely inspired.

“When I was over there [in China], what I saw was a lot of, well, there wasn’t a lot of talk about religion or God. It was very much monetary-focused. And to see the spiritual side of it and all that feeling of deity and the importance of it and faith, it was really inspiring,” said Mr. Grandpre.

“I love the message about the, you know, freeing from the oppression and pain, the communist oppression that we see and still see,” he said.

“They relate to all of us, there are things that we can all appreciate and feel better after. So when I was watching it, I just felt so much of a desire to be just a better person after watching it because it was so touching and moving. Just makes me want to be better,” Mrs. Grandpre said.

“Everything Is Exactly Synchronized” 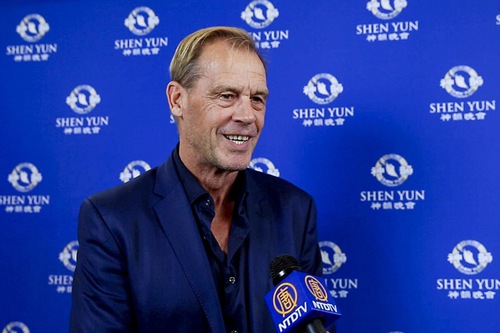 Jan Versleijen at the Shen Yun performance at the Kursaal Oostende in Oostende, Belgium, on March 9. (NTD Television)

“I can imagine they train, maybe 10, 12 hours per day. That takes a long time. You can see that. Everything is exactly synchronized. So it was beautiful,” Mr. Versleijen said.

“It's a show without speaking. So it’s the expression of the artists' performance that gives really clear imagery of how the story is.

“Like the part where the boys and girls are walking with mobile phones. And they're walking, and they only have eyes for themselves. And that's typical for this generation, for this moment in our world. Everybody is very individual. And if you look at the story before, that it's all about sharing, sitting together, talking together, enjoying dancing. That's what's in that part really clear, visible,” he said.

Prior to Shen Yun's performances at the Lincoln Center, 8 U.S. Representatives, 11 State Senators, and 25 State Assembly Members from New York extended welcome to the company with letters and proclamations. 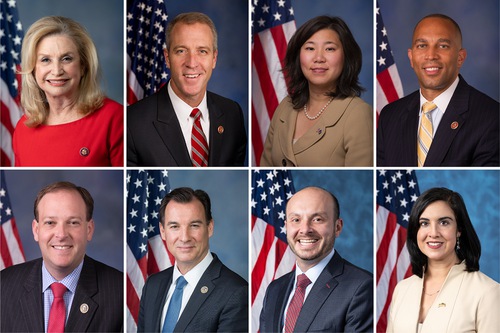 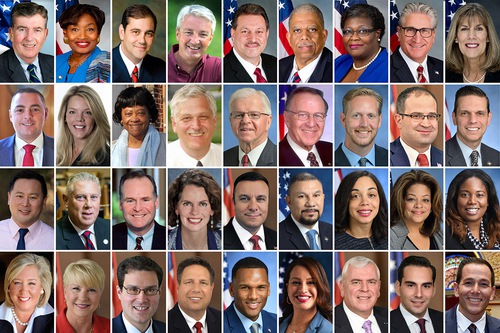