(Minghui.org) A Chengde City, Hebei Province resident was transferred to a local prison on February 16, 2022 to serve a five-year term for raising awareness about the persecution of Falun Gong and how the ancient spiritual discipline saved her life from advanced tooth pulp cancer. 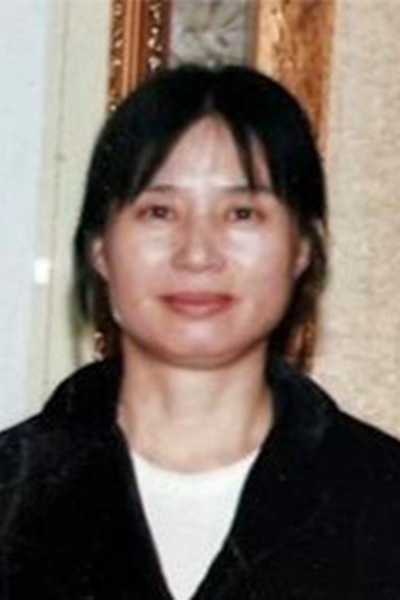 Ms. Guo Xin was arrested at home on January 11, 2019 by officers from the Shuangqiao District Domestic Security Office. She was later released on bail after the local detention center refused to admit her due to her health.

The police later submitted Ms. Guo’s case to the Chengde City Procuratorate. Prosecutor Liu Changying indicted her and moved her case to the Shuangqiao District Court.

When Ms. Guo appeared in court on July 10, 2019, she testified in her own defense. She described in detail how her pulp cancer was cured by Falun Gong. She said that she had small white pustules all over her gums. All of her teeth became loose. She even worried that her teeth might out while she was talking. The cancer also caused her front teeth to stick out and her face to become deformed. The doctor estimated that she may have less than two years left.

Tormented with excruciating pain and deep despair, she began to practice Falun Gong. Within a short time, the pain subsided and the infection was purged. The receding gums grew back and her loose teeth were stabilized.

Grateful to Falun Gong for saving her life, Ms. Guo made calendars with Falun Gong information on her own and distributed them, hoping that more people could benefit from knowing about the practice. She stated that she didn’t violate any law in doing so and demanded that the judges follow their conscience and uphold justice.

On July 23, 2019, thirteen days after the hearing, the judge announced a 5-year sentence with a 10,000-yuan fine. While the court agreed for Ms. Guo to serve time at home, Tao Yibo, the deputy director of the Shuangqiao District Domestic Security Office, forcibly took Ms. Guo for a physical examination on December 10, 2021. After filling in some paperwork at the court, the police took her to the Chengde City Detention Center that same day. She was transferred to the Hebei Province Women’s Prison on February 16, 2022.

Below is Ms. Guo’s defense statement (edited for length and clarity):

My Name is Guo Xin. I’m 61. A few years ago, my teeth began to have persistent bleeding. I tried some medication, but it didn’t help. Later on, a tumor grew on my chin, to the size of an egg, and was very hard. Under my tongue, there was another growth, about an inch wide, on the left side.

After some examination, my doctor told me that what I had was pulp cancer. The solution was to pull all of my teeth and excise the bad tissue on my chin. I was also told that I may have less than two years left.

My family was willing to spend all of our saving to seek treatment for me. But a friend also told me that once I had the operation, the tumor would metastasize and there would be no way to completely remove it. One patient who had the same cancer died when the doctor was performing the fourth excision of the cancer tissue. Another patient who was less than 50, had five teeth pulled and the bone of the lower jaw removed. But less than six months after the operation, the cancer cells spread to the eyes and brain and no further operation could be done. The patient relied on morphine to kill the pain, which lost its effectiveness as time went on. The patient was unable to eat and could only take in some liquid food through a hole in the cheek.

The two patients’ treatment sounded horrifying to me. I knew the only way out for me was to practice Falun Gong.

Upon returning home, the toothache, especially in the roots, became more and more intense. I felt the pain was exploding. A hard material, like crushed stones with many holes, kept falling out. All of my teeth became loose. The pain was unbearable even when I ate only congee. When I talked, I was afraid that my teeth might fall out, if the airflow was just a little stronger.

Because my upper gum was deformed, my front teeth were protruding and the gap between the teeth was wide enough for a finger! I couldn’t close my mouth and my face was deformed as well.

My gums were covered with small white pustules. The upper chamber of my mouth was covered with thick pus. My mouth gave off a very terrible smell and we had to keep the window at home open at all times.

My son was afraid that I might die and he often had nightmares about it. I could see the fear on his face. My face was terribly sallow and I didn’t look like a living person. Every day, I had to face the pressure, pain and suffering. I truly felt the weakness and misery of life. I couldn’t describe how sad I was.

The constant toothache left my whole body, brain, every cell and my whole being in a deep dimension in pain, every second.

During the worst episode, I rolled over on my bed at 3 a.m., unable to fall asleep. Even one second of the pain was unbearable to me. With no other hope in sight, I knelt in front of the photo Master Li (the founder of Falun Gong) and asked for Master’s help.

At that split second, I heard an exploding sound in my mind and then I lost consciousness. When I woke up the next morning, my excruciating pain was gone and I felt that I had never had such a sound sleep in all of my life.

Since then, my toothache began to subside very quickly. Especially when I studied Falun Gong’s teachings or did the exercises, the pain would be reduced to a bearable extent. The effect of the sitting meditation was much better than morphine. I know it’s Master’s boundless compassion and wisdom that saved me. Master bore the pain for me and resolved my karma associated with it.

Master was purifying my body every day. Every morning or late at night, I vomited sticky pus or blood, sometimes with tiny tumors or blood clots. The tumors were very round and up to the size of sorghum rice. Most of them had tiny tails, like tadpoles. The process lasted for several years and the little tumors I vomited were in the hundreds or thousands.

I’m so lucky to have encountered Falun Gong and Master Li. It’s Master who saved me from the endless abyss of suffering and extended my life. It’s not something that can be achieved by modern medicine. It’s truly a miracle.

Now the tumor on my lower chin is still there, but it’s becoming smaller. The upper chamber of my mouth, which was covered with thick pus in the past, also began to have new flesh growing out. The receding gums were growing back. Some of my teeth were stabilized and I no longer had so much pain. The bad smell in my mouth was gone. Everything was moving towards the right direction.

My own life-and-death experience is a first-hand witness to Falun Gong’s magnificent power. It’s real science, not something superstitious. It brings hope and beauty to people. If everyone practiced Falun Gong and lived by the principles of Truthfulness, Compassion, Forbearance, society would be a much better place. We would have true harmony and people wouldn’t commit crimes. We already saw that when Falun Gong was first spreading in China.

My son fell victim to fraud by his friend and lost over 300,000 yuan. He was very upset and wanted to take revenge. I persuaded him to take it lightly and use kindness to handle the conflict. He calmed down and the issue was resolved peacefully.

I used my meager income to buy some supplies and produce desktop calendars with information about Falun Gong. I hope that those who are suffering from terminal disease like me and who are at the end stage of their lives, could find hope in Falun Gong and recover soon.

Everything I did was for the benefit of others. I didn’t have any personal pursuit, but did things purely for others’ good.

I hope the judges can follow the law, uphold justice and not persecute innocent people.

I also want to talk about a few things, which shows that there has never been any legal basis for the persecution [of Falun Gong].

In 2000 and 2005, the Ministry of Public Security issued the “Notices on Several Issues Concerning the Identification and Banning of Cult Organizations.” None of the two documents listed Falun Gong.

The Chinese Publication Bureau also issued a notice on March 1, 2011, lifting the ban on Falun Gong books that was put in place in 1999.

Article 35 of the Chinese Constitution says, “Citizens of the People’s Republic of China have freedom of speech, publication, assembly, association, procession and demonstration.”

And Article 36 of the Constitution states, “Citizens of the People’s Republic of China have freedom of religious belief.” As such, it is legal for citizens to own, read and disseminate Falun Gong books.

Since no law has ever ruled that Falun Gong is illegal, I have not committed any crime for practicing Falun Gong. I’m a law-abiding citizen and innocent of any crime. I urge you to return all of my confiscated personal items, including Falun Gong books and Master’s photos.