(Minghui.org) “American policy-makers should clearly condemn this persecution against Falun Gong and declare it a genocide,” wrote Nina Shea, Director of the Hudson Institute’s Center for Religious Freedom, in an article titled “The CCP Wages a Second Genocide – against Falun Gong” published in National Review on February 4. 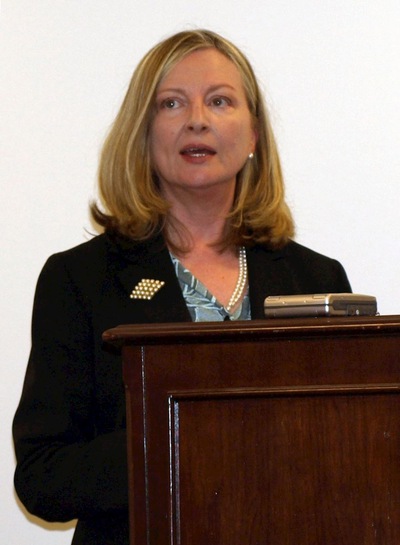 Nina Shea is the director of the Hudson Institute’s Center for Religious Freedom.

More specifically, this genocide “is signaled by several rigorous reports establishing that large numbers of its detained practitioners have been forcibly subject to medical procedures that inevitably kill them.” These reports indicated that after declaring a government intent to eliminate Falun Gong 20 years ago, the Chinese Communist Party (CCP) “has targeted Falun Gong detainees for involuntary organ harvesting, in addition to mass internment, disappearance, and torture.”

“This means that victims are either killed while or shortly before their hearts, livers, lungs, and kidneys are surgically excised to be sold in what Beijing boasts is the world’s largest organ-transplant market,” explained Shea. She added that critical new finding from U.N. experts have strengthened the case for genocide.

The persecution started in 1999 with an order from Jiang Zemin, former Chinese president and CCP General Secretary. Beijing estimated that there were about 70 million Falun Gong practitioners at the time. The U.S. State Department noted that the CCP launched “an extralegal, party-run security apparatus to eliminate the Falun Gong movement.”

Citing studies documented in Bloody Harvest, a book by former Canadian government minister David Kilgour and expert David Matas, Shea wrote, “The source for most of [China’s] massive volume of organs for transplants is the killing of innocents: Uyghurs, Tibetans, House Christians and primarily, practitioners of the spiritually based set of exercises Falun Gong.”

Other studies have also confirmed evidence that Falun Gong practitioners are not only among the victims of an involuntary organ-harvesting industry, but likely have been its main victims over the past two decades. There have been at least two such assessments in 2020. One from Matthew Robertson of the Victims of Communism Memorial Foundation (VOC), whose assessment was published by the Jamestown Foundation, the other from the China Tribunal, an independent panel led by Sir Geoffrey Nice, who headed the recent Uyghur Tribunal as well.

The assessments were consistent with the fact that “China’s hospitals schedule transplants on demand, within days or weeks” as documented in Bloody Harvest, in sharp contrast with NIH records that indicate that the median wait for kidneys in the United States is four years. According to an archived 2004 version of a China-based transplant company’s website, prospective foreign patients are told, “In China we carry out living donor kidney transplants. It is completely different from the deceased body [corpse] kidney transplants you hear about in Japanese hospitals and dialysis centres.”

Chinese authorities claimed that it had ended such abuses, such as the use of death-row inmates, in organ sourcing in 2015, and established a voluntary donor system instead. But the China Tribunal found that official Chinese transplant statistics are “falsified.” “It observed an ‘incomprehensible gap’ between ‘credible’ assessments, based on hospital data, of some 60,000 to 90,000 transplants annually, and the 5,146 eligible organ donors reported in one year by the PRC,” Shea wrote. “The Tribunal and other studies conclude that live Falun Gong detainee sources helped fill this gap. The common media citation of 65,000 Falun Gong practitioners murdered for their organs, it should be noted, is from Ethan Gutmann’s research covering 2000-2008 alone.”

Additional evidence including testimonies showed that Falun Gong detainees are commonly subject to prison medical examinations, and the results are entered into government databases for organ allocations by the hospital system. “The Jamestown Foundation details an overlap between medical-transplant personnel and CCP cadres in the anti-Falun Gong campaign, and close organ-transplant coordination among the CCP, People’s Liberation Army, prisons, and hospitals,” explained the National Review article.

In addition, the China Tribunal concluded two years ago that the CCP has committed a “crime against humanity” in organ harvesting, raising the possibility of Falun Gong practitioners’ death from organ harvesting. “Documentation by a dozen United Nations human-rights experts reveals that Falun Gong and other religious prisoners of conscience are exclusively targeted for organ harvesting, while other detainees with equally valuable organs are not specific sources,” stated Shea in the article. “The CCP’s singular targeting of detained religious minorities, in particular Falun Gong, indicates profit is not its main motive (though money may be the motive for medical personnel involved).”

A joint statement in June 2021 by the twelve independent human-rights experts appointed by the U.N. to report on such issues such as torture, detention, religious freedom, women’s rights, and minorities, declared that they are “extremely alarmed” by “credible information” of “‘organ harvesting,’ against Falun Gong practitioners, Uyghurs, Tibetans, Muslims and Christians, in detention in China.” In fact, these groups became unwilling subjects of medical exams with results “registered in a database of living organ sources that facilitates organ allocation.” In contrast, credible information showed “other prisoners are not required to undergo such examinations.”

In summary, this information reveals links between the CCP’s order “to ‘eliminate’ Falun Gong and the finding by the China Tribunal and other experts that ‘large numbers of Falun Gong detainees have been selected by CCP and state officials to be sent to certain death close to or on transplant operating tables. This evidences genocidal intent’,” Shea wrote.

“American policy-makers show new willingness to recognize CCP repression. They should clearly condemn this persecution against Falun Gong and declare it a genocide,” Shea concluded. “Had this been done earlier, the Uyghur genocide might never have happened. Notwithstanding, the Beijing Olympics gives warrant to special scrutiny of this horrifying and continuing chapter of the CCP’s human-rights record.”