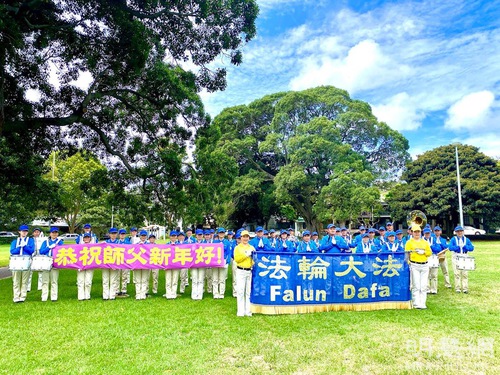 Learning to Let Go of Self

Gao Deming worked hard at improving his skills after joining the Tian Guo Marching Band in 2007. He took lessons with three professional teachers, joined 7 music bands and became an assistant conductor as well as a trombone player in a professional orchestra in Sydney. He said, “I performed in various bands to gain more experience and improve my skills to be more effective in saving people in Dafa projects.”

Mr. Gao who is currently head of the band’s trombone section has a Master’s degree in music. Yet he thinks the greatest reward he has from being part of the band for 15 years is the cultivation opportunities. “I keep telling myself to cooperate unconditionally. I am validating the Fa not myself. I used to be arrogant and focused on improving my technical skills. This caused tension in the group—but I learned to let go of my attachments in the end.”

He is grateful for the opportunity to practice Falun Dafa and temper his character. “Dafa changed me. I gradually learned to think of others and the group. Now I realize that every member of the band should blend into one body instead of paying attention to the display of individual skills.”

Sticking to One Project from Beginning to End

When Huang Jiazhen joined the Tian Guo Marching Band in 2006, she knew very little about music. She learned to play the saxophone and thought it was good enough to perform a song. She did not put much effort into improving her basic skills. Two years ago, she ran into a bottleneck in basic skills training and thought of quitting.

She said, “I had to start learning from scratch and forgot what I was taught previously. Sometimes I bit my lips so hard out of frustration as I played that they bled. I became very anxious. I spent a lot of time and effort yet could not meet the standard. I thought of giving up. I thought I might as well use the time to make phone calls to China and save more people directly.”

She recalled a promise she made to herself when she first started practicing Falun Dafa in 1996, “If something happens and three people come to talk to me about it, I should think about what attachment I was holding onto. I stopped arguing after three practitioners came to share their understandings with me. From the perspective of cultivation, I should not stubbornly think I am right.”

Through studying the Fa, Jiazhen realized that she should regard this process as part of cultivation. “For instance, everyone thought I was not up to standard in the band. On the other hand, I was already familiar with the phone call team and I felt I was making a contribution in that project. What human notions were behind these thoughts? Pursuit of fame, jealousy, attached to dignity... these thoughts made me want to quit. If I went along with them, I would have a lot less trouble. But if I want to practice cultivation, I should eliminate these attachments that are obstructing me in making progress.”

She decided to do as she was told. “I let go of my dignity and stopped worrying whether I played well or not. When I make mistakes I practice at home. I made up my mind to practice every day without taking any shortcuts.”

She gradually eliminated her attachments one by one during the practice sessions. The faster she got rid of them, the better she played. With a solid foundation in the basics, when she returned to playing Falun Dafa music, she got the rhythm right and her performance was up to standard.

She said, “Since I chose to practice cultivation, I should not give myself excuses. I chose to join the band so I should do well. If I gave up, it would be a loss to the entire band. Newcomers have to spend even more time and effort learning from scratch. Besides, as long as I have these attachments, they would manifest in other projects and I would still have to go through the same process.”

Persisting in Doing Everything Well

Hu Jian is one of the first practitioners to join the Sydney Tian Guo Marching Band and plays the tenor horn. To him, the greatest benefit he gained since starting to practice cultivation in 1997 is to be diligent and persistent. “Whatever I do in my cultivation, I tell myself to keep going on. My endurance has become stronger too.”

“To give an example, it was exceptionally hot when I participated in the July 20 parade in Hong Kong in 2019. On top of that, the route was the longest. Most practitioners who participated in that parade felt the trying conditions. However, I did not feel much physically. From the beginning to the end of the parade, despite the scorching weather, I did not take a sip of water. Yet I had a major breakthrough in my performance. I was able to play smoothly the songs I used to struggle with. I was no longer terrified of repeatedly playing the tunes I found difficult. I think this was due to Master’s protection. I got rid of my mental block in playing certain tunes.”

Li Qizhong who began to practice Falun Dafa in 1996 also felt it was important to stay on and do well in one project. “As I don’t have any music background, it was hard for me. This is a group project and working well together is crucial, so it’s important to improve one’s individual skills. Another challenge I faced is balancing work, studying the Fa, doing the exercises, and practicing my instrument.”

Qizhong joined the band 6 years ago. In order to practice playing the saxophone and not disturb his family, he went to a local park to practice. “During the lockdown, the band asked everyone to brush up on their basic skills. I only practiced the songs we performed in the past and neglected to practice basic tunes. I spent over an hour repeatedly playing a practice song and someone walking his dog asked if I could play other songs!”

The next day he got a complaint again when he practiced outdoors. He went home and looked within to see what he had done wrong. “As a practitioner, I know nothing happens without a reason. I discovered I had jealousy. I thought I should be better than the newcomers since I had been part of the band for several years. I later learned that they spent more time than me in their practice. No loss no gain. I knew Master was using this incident to help me find my attachments.”

He felt at peace after he eliminated his attachment. Although the parks around his house were not suitable for him to practice his instrument, a practitioner soon offered him an empty property that was going to be put on the market for sale. Qizhong is grateful to Master for the arrangement.

Xu Mei joined the Tian Guo Marching Band in 2006 and plays the flute. She cherishes the opportunity to perform in the band and participates in nearly every event. For many years she traveled to Hong Kong 7 or 8 times each year to participate in the grand parades. She felt it was worth it when she saw the Chinese cheering loudly and saying they were impressed by the grandeur of the band. She hoped that they would realize Falun Dafa is good unlike the propaganda spread by the Chinese Communist Party to demonize the practice.

“I began to practice Falun Dafa in 1997. I gave out information on Dafa in China before I left in 2000. My mother was illegally detained for 8 months and I was nearly arrested twice. I know the mental pressure practitioners in China go through in that oppressive environment. It is hard for their families as well. Yet they risk their lives and continue to go out and clarify the truth to people. In comparison, I live outside China, I can afford to go to Hong Kong and there is no danger, I should not hesitate to do my part and do well.”

Mei and her husband are office workers. Besides repaying their home mortgage, they have two children but they never felt that they did not have enough money. One time, Mei purchased a plane ticket to Hong Kong and her daughter’s school unexpectedly refunded the additional school fees she paid. The amount was nearly the price of the plane ticket. Mei said, “I thank Master for taking care of me, providing such a great cultivation environment so that I can assist him in Fa-rectification without any worries.”

A few years ago, Mei became head of the flute section in the band. She said, “When I encounter difficulties or people that don’t agree with my opinion, I know it’s not their problem. I know it’s because I am too petty. I try to correct my mindset before dealing with the situation. I know that I should cherish the opportunities Master gives me to improve in cultivation. I hope I can do better in the new year so that Master has less to worry about.”