(Minghui.org) Today's news from China includes incidents of persecution that took place in 8 cities or counties in 4 provinces, where at least 15 practitioners were recently persecuted for their belief. 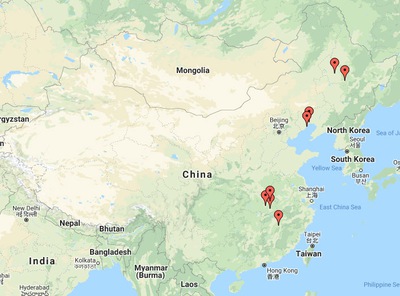 Ms. Xia Jiping, 58, has been imprisoned twice since the end of 1999. She was detained and tortured for seven years in the Jiangxi Province Women’s Prison.

She was deprived of sleep at the beginning of her imprisonment. She was forced to stand beside a window until 2:00 a.m. or continuously write down the prison rules. One day after midnight, she fell asleep and her head dropped to the desk. An inmate monitor who was assigned to watch her threw her to the ground. Her head hit the ground. The top half of her face was bruised and swollen.

Guard Yang Bo confiscated all of her daily necessities and left her no clothing to change into for three months. It was summer. When she bathed she had to wash her clothing, put the clothes back on wet, and let them dry on her body.

The prison later assigned two ferocious guards, Wang Ning and Huang Shanyu, to form a special group with only one goal—forcing Ms. Xia to renounce Falun Gong. Around 10 criminal inmates took turns monitoring her 24 hours a day. They punched her and kicked her at will. They banged her head and knee joints with water bottles; tied her four limbs to a metal chair; hung her up from her wrists to window frames; punished her for blinking her eyes or shifting her body. She was given only a small spoon of rice and a sip of water as a meal. She was not allowed to bathe and was kept awake for 24 hours.

Ms. Xu Suqing of Yi County was arrested on January 28, 2022, when she was talking to people about the persecution of Falun Gong in the Gaoqiao Town Open Market in Huludao City. A practitioner from Gaoqiao Town was arrested at the same time. They are subjected to 15 days of detention and are being held in the Huludao City Detention Center.

Mr. Cao Xifeng and his wife, Ms. Zhang Xiuli, of Wuchang City were arrested at home around 9:00 a.m. on April 30, 2020. Niujia Town Police Station officers, including instructor Yang Xiangcheng and deputy director Zhao Yan, ransacked their home and seized over 47,000 yuan in cash, two computers, two copy machines, four portable audio players, four cell phones, a desk light, 10 TV receivers, 90 copies of Falun Gong books, a TV box set, and other items. Because detention centers did not accept newcomers due to the pandemic, they were released after midnight.

Since the officers are waiting for the pandemic restriction to be lifted to arrest them, they left home.

Xu Jiaju (gender unknown), Mr. Wu Shuangxi, and Mr. Tao Lahuai, 71, were reading a Falun Gong book in the home of Xu (in his or her 80s, first name unknown) at 4:30 p.m. on the afternoon of July 22, 2021, when Macheng Domestic Security Division officers, including Cai Bo, broke in. The officers claimed that they were illegally gathering and arrested them. They were taken to the security division and interrogated the entire night. They were deprived of food before they were taken to the Macheng City Detention Center at noon the next day.

No one was at Mr. Tao’s home while he was held in police custody. The officers illegally broke his door, entered the place, seized a picture of the founder of Falun Gong and over 40 copies of Falun Gong books. Mr. Wu’s home was also ransacked.

Mr. Tao is in his 70s. He has been repeatedly harassed. He could not take the intense harassment and fled home to avoid the persecution. His work unit security leaders went to his home and harassed his family in October 2021. The leaders demanded to know his whereabouts and threatened to suspend his pension if he did not return soon.

Mr. Sun Wenzhong is still being held in the Taikang Detention Center, in spite of the appeal from his family. The three practitioners who were arrested with him were released on bail after they each paid 10,000 yuan. One of them, Mr. Zhang Li, was charged by police. His case was submitted to the Development Zone Procuratorate.

Mr. Liu Jinming was arrested by Wenquan Police Station officers after 3:00 p.m. on January 27, 2022. He was charged for suing former CCP (Chinese Communist Party) leader Jiang Zemin in 2016. The case is still open in court. The court had the police station arrest him. He is being held in the Caozhuang Detention Center.

Ms. Yang Jiamin is being held in the Jiangan District Detention Center. She became nearsighted, 3.5 degrees, as a result of persecution. She was not allowed to sit for days; hence she has suffered lower back pain.