Ireland: Chinese Thank Practitioners for Exposing the Persecution “You Speak Out for Chinese People”

(Minghui.org) The peaceful scene of Falun Dafa practitioners practicing the exercises to soothing music is a regular sight on Grafton Street, a famous landmark in Dublin, Ireland’s capital. Once even Dubliners were reluctant to set foot on this winding alleyway. Grafton Street has become a popular destination attracting millions of tourists from around the world to shop and sightsee.

They displayed copies of the proclamations issued from governments around the world that praise Falun Dafa, as well as photos that showed how officers in China violently torture practitioners. This sharp contrast attracted people to stop and read them. Some people took out their cameras or cell phones and recorded the information. Many people signed the petitions that call to disintegrate the CCP (Chinese Communist Party) and stop the persecution of Falun Dafa. 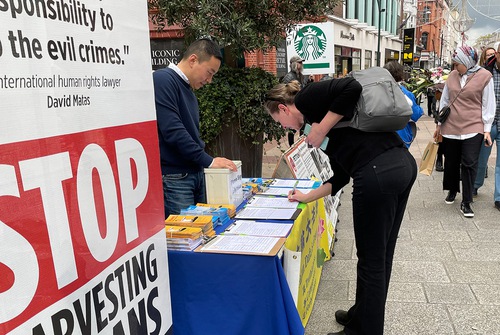 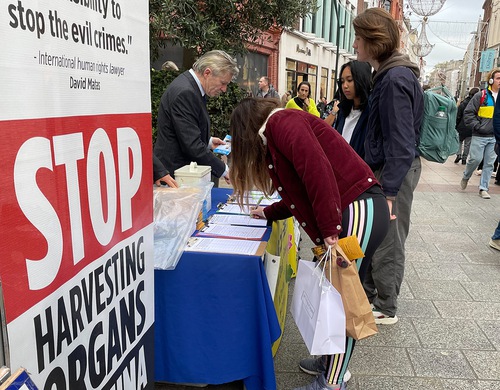 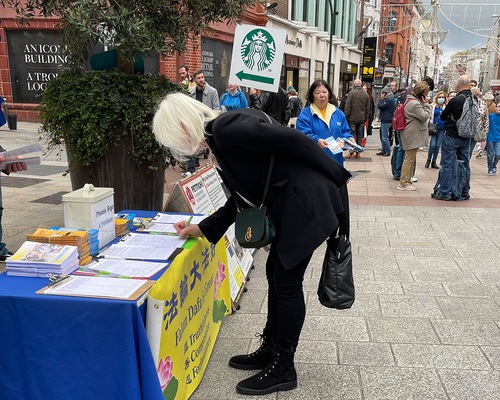 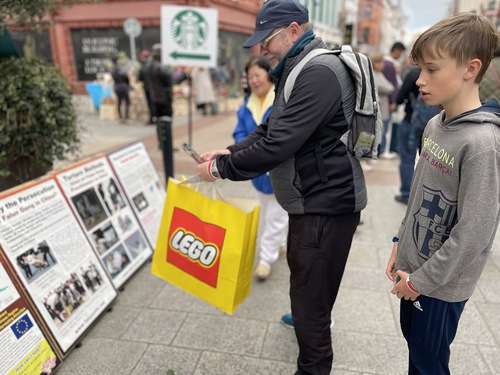 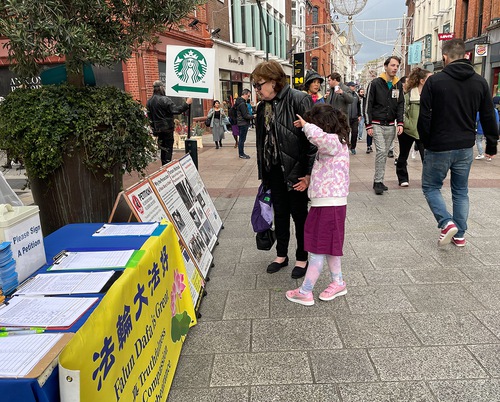 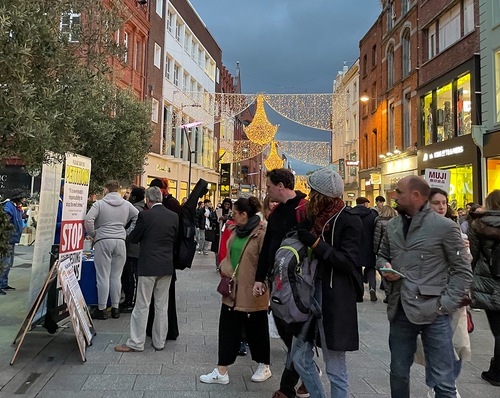 Practitioners held an event on Grafton Street on November 12, 2022 to tell people about Falun Dafa and how the CCP persecutes it. Many locals and tourists signed petitions to support ending the persecution of Falun Dafa. 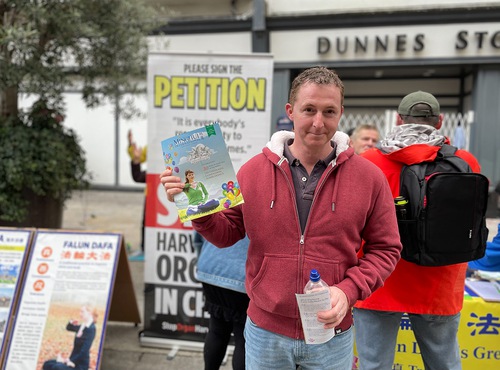 A man who supports practitioners’ peaceful efforts to expose the persecution.

A young man in his 20s hurried over to the booth soon after practitioners set it up. He asked Michael, a Western practitioner, “Do you remember me?”

“Of course I remember you!” Michael said. The young man no longer had the gloomy expression he had last year when Michael first met him. Michael knew that learning about Falun Dafa helped this young Chinese man give up the idea of committing suicide.

Michael recalled that he first met this young man during an event one Saturday last November. He and other practitioners were handing out leaflets on the street. As the sky began getting dark, the Christmas lights above their booth lit up one after another. The atmosphere was cheerful and festive and the street was full of people coming and going.

A young Chinese man who looked depressed stopped to take a flyer that Michael was handing out. When he asked what it was Michael explained that they were Falun Dafa practitioners. They were there to tell people about the persecution in China. The young man didn’t say a word and looked depressed. Michael was concerned and asked if he needed help. They talked and eventually, the young man said that he was heading to the station nearby and planned to throw himself in front of a train and end his life. With a grave expression on his face, he said that he made too many mistakes and could not forgive himself.

Michael was startled. He told the young man that his life was very precious and that he should live and have a good life instead of ending his life. Michael and another practitioner shared with him their experience after reading Falun Dafa books and told him that the answer to life can be found in Dafa. He listened quietly, and his expression became thoughtful. Before he left, a practitioner told him to sincerely say, “Falun Dafa is good” and “Truthfulness-Compassion-Forbearance is good,” and it would help.

Michael was very happy to see the young man. The young man said, “I made a special trip and came here to thank you.” He said that this time he was on his way to work.

Michael told him that everyone has moments in their lives when they feel that the sky is about to collapse. They feel extremely desolate and dark inside and feel that there is no hope. However, “If you can remember Falun Dafa’s principles, you will find that there is always a path that will help, and there will always be a way out of the darkness. It just happens naturally, and you can’t even explain how it (the miracle) happens.” The young man shook hands with Michael and said, “Thank you for remembering me. Thank you for your help.”

A practitioner offered an informational brochure to a young Chinese woman. She told the practitioner, “Falun Dafa is really great. You speak out for Chinese people.” She explained that she was originally from Sichuan Province and heard what happened to some high-ranking CCP officials. The practitioner told her that those fallen CCP officials all followed the former Party head Jiang Zemin to persecute practitioners and kill them for their organs and that the CCP staged the Tiananmen Self-immolation Incident to slander Falun Dafa.

Ms. Chen, another Chinese, said that she learned from an online video that the CCP’s propaganda about Falun Dafa is all fake. She said that she believes in God and is a Christian, “But the CCP does not allow any beliefs. You can only believe in the CCP. It demolishes churches.” She said she knew that Falun Dafa is good, and the CCP is evil. She withdrew from the CCP with a pseudonym and wished practitioners well. 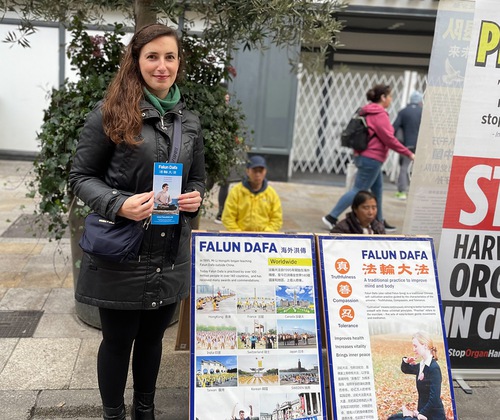 Karolina from Poland said she supports practitioners’ efforts calling for an end to the persecution.

Karolina from Poland said she was drawn to the exercise music and came to the booth. When she saw practitioners meditating she asked what they were doing. A practitioner told her that they were doing the fifth Falun Dafa exercise, that the five exercises were easy to learn, and that it is a practice of body and mind. Karolina said that she was very interested in learning to meditate. She signed the petition that calls to end the CCP’s persecution. 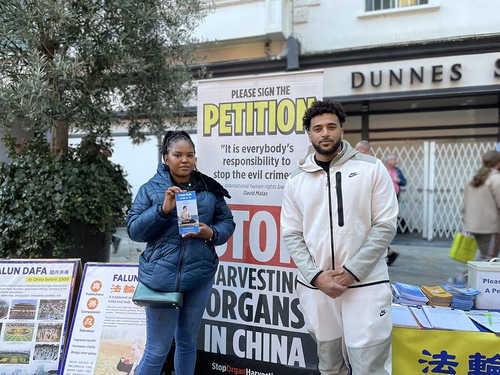 Akira from Jamaica (left) and Abad from Sudan support practitioners’ efforts to expose the persecution.

Akira and Abad, who live in Ireland, said they also like Falun Dafa’s slow and peaceful exercises. They said that they wanted to learn and asked where the exercises were taught. They said that they had never heard of the persecution before. Abad said he was from Sudan and was well aware of the dangers of communism. They both hope that more people will learn the facts about the persecution. They encouraged practitioners, “Hold onto hope, and you will see the arrival of peace.” 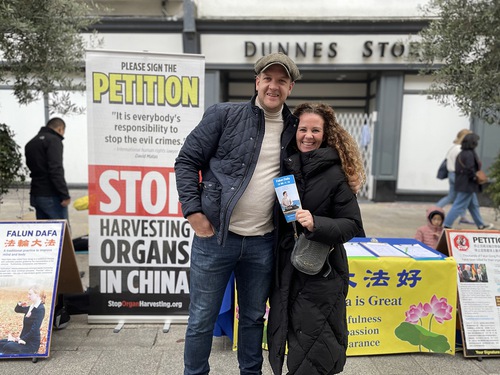 Lisa (left) and Joe from London support practitioners’ efforts to expose the persecution.

Lisa and Joe from London were visiting Ireland for the weekend. They said that they always see practitioners peacefully protesting outside the Chinese Consulate in London. They were surprised to see Falun Dafa practitioners holding an event in Ireland. They said that what practitioners do is very important, “Not only do you tell the world what practitioners in China suffer, but you also let people in Europe understand the danger they are facing now: the CCP is infiltrating every stratum of society. If the CCP can indeed break the principles of Truthfulness-Compassion-Forbearance by spending such a huge amount of resources and time, then no one will be able to escape its devil’s claws.” 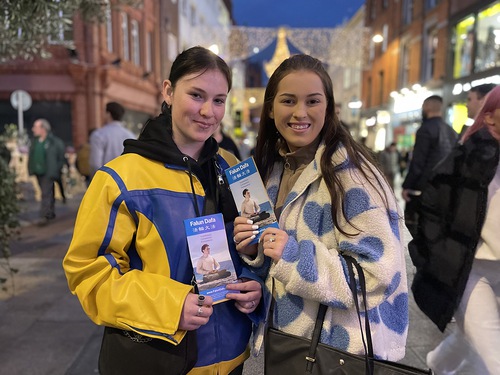 Keira and Megan from Ireland support practitioners’ efforts calling for an end to the persecution.

Keira and Megan stop by the booth in the evening. They carefully read the information and signed the petition to call for the persecution to end. Keira said it was “really sad” to see Falun Dafa practitioners lose their freedom and suffer torture just because of their beliefs. Megan said that it is, “a very meaningful thing” to let more people know about the ongoing persecution. She encouraged practitioners to persevere.