(Minghui.org) Today's news from China includes incidents of persecution that took place in 10 cities or counties in 5 provinces, where at least 18 practitioners were recently persecuted for their belief. 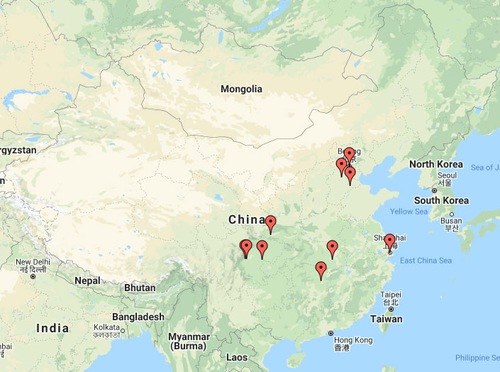 Mr. Cheng Zhihong from Dayi County will be tried again in the Chengtie Intermediate Court of Chengdu City on the morning of December 29, 2021.

Ms. Du Shuhui is a retiree from the Urban Construction Bureau of Mian County. She has been detained for a total of 11 years since the CCP’s persecution of Falun Gong began in July 1999. After Ms. Du was released at the end of 2020, she continued to be persecuted. She was harassed at home by local 610 Office staff on April 19, 2021 and June 3, 2021 and was pressured to sign a guarantee statement. Her pension has been suspended.

3. [Wuhan City, Hubei Province] Ms. Zeng Xianmei Sentenced to One and a Half Years in Prison

Ms. Zeng Xianmei was arrested by officers from the Jiang’an District Police Department on November 19, 2021. She was later sentenced to one and a half years in prison. Since she was found to have severe heart problems, the term was executed outside of prison.

When Mr. Dai Qingping went shopping in a supermarket on December 22, 2021 he did not return home. It was later learned that he was arrested by officers from the Pozi Street Police Station and was detained in the No. 4 Detention Center of Changsha City.

Ms. Chen Qinfang, 62, lives in Zijing Village, Anting Town, Jiading District. She was arrested on the evening of December 23, 2021 and was taken to the Anting Police Station. Her home was ransacked and several Falun Gong books were confiscated. She is currently detained in the Jiading District Detention Center.

Ms. Chen has been subjected to force labor five times and sentenced to prison once. She has been detained for a total of ten years.

Mr. Yu Hongbing and his wife rented a house in Bojiying Village, Dayushu Town, Yanqing District. They were arrested by officers from the Dayushu Town Police Station at their home at 11 p.m., December 15, 2021.

Two officers from the Kangzhuang Town Police Station in Yanqing District went to Mr. Hao Xiufeng’s home on December 24, 2021. Mr. Hao was not at home. The officers talked to his wife and wanted to know where Mr. Hao worked, when he would be home and what he normally does. His wife refused to answer their questions.

Police officers went to 70-year-old Ms. Zhang Bihua’s home on November 24, 2021. Ms. Zhang was not at home. The officers told her son to make Ms. Zhang stay at home.

Staff members of the local neighborhood committee went to Ms. Li’s home on December 23, 2021. Ms. Li was not at home. Her son was pressured to sign a guarantee statement on his mother’s behalf.

Ms. Wang Biyun lives in the Wunan Community in the Wuchang District. She was arrested at home by officers from the Luojiashan Police Station in Wuchang District on the morning of December 14, 2021. She was detained in the Jiangmin Road Brainwashing Center. Her family went there and tried to take her home on December 24, 2021. They were told that Ms. Wang would not be allowed to leave until she was “transformed.”

Ms. Fu Aiying lives in Wangwu Village. She was harassed at home by the village officials Wang Jingming and Wang Tinghua on December 8, 2021. Ms. Fu was pressured to sign a guarantee statement which she refused.

Ms. Xu Jinying lives in Waligao Village. Her son was called to the village office from his workplace by the village official Gao Zhijia on December 10, 2021. He was pressured to sign a guarantee statement on behalf of his mother and was threatened that he and his sister would be unable to go anywhere if he did not sign. He gave in.

Ms. Liu Shufen lives in Boqizhang Village. The village official Han Jinsheng went to her home one day in mid-November 2021. Ms. Liu was cooking at home. Her husband was pressured and signed a guarantee statement on behalf of his wife.

Ms. Liu Yanzhen and Ms. Gao Meifen live in Caozhuang Village. Their husbands were also tricked into signing guarantee statements on behalf of their wives.

Ms. Guo Dachun from Mancheng District, nearly 80, was arrested by officers from the Chengguan Town Police Station on the morning of December 16, 2021 for distributing calendars which contained information about Falun Gong. She was released around 11 p.m. that night. Her home was ransacked on the same day. The police confiscated all her Falun Gong books, a photo of Falun Gong’s founder, two printers, one laptop, and more than 100 calendars. The police returned the next day to harass her. They came back on December 24, 2021. Her family was told that Ms. Guo would be detained for 10 days. She was not taken away that day because her family objected.