Paris Business Owner: I Wish Everyone Could Follow the Principles of Truthfulness-Compassion-Forbearance

(Minghui.org) On the second day of the New Year, Falun Dafa practitioners gathered at Place du Châtelet, a public square in Paris, to demonstrate the exercises and tell people about the persecution in China. They also collected signatures on petitions that called for an end to these egregious human rights violations.

One passersby who signed the petition said that he likes Chinese culture and often travels to China. “Many Chinese people are brainwashed by the Chinese Communist Party (CCP) and they do not understand what the regime really is. Westerners also need to stay alert and not confuse China with the CCP.” 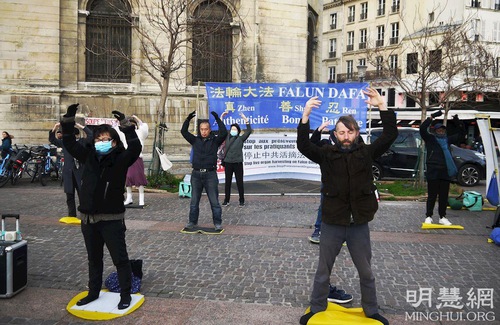 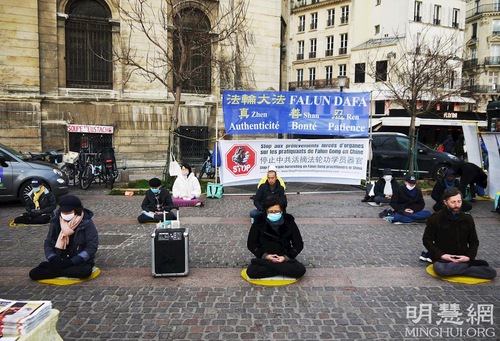 Practitioners demonstrated the exercises at Place du Châtelet, a public square near the metro station Chatelet Les Halles, on January 2. 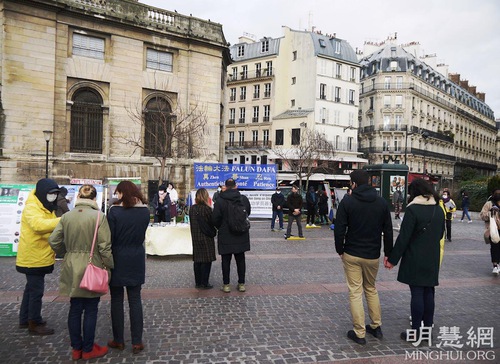 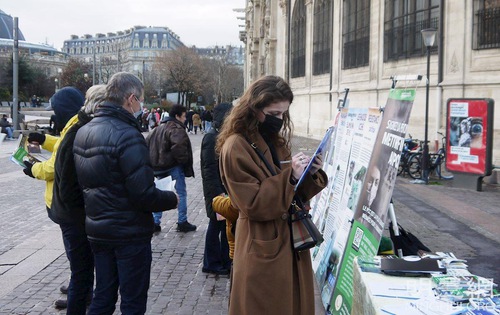 Pedestrians stopped to read the information and signed the petition that calls for an end to the suppression in China.

“We Should All Stand Against Organ Harvesting”

Naul, who works in tourism, said she’s seen Falun Dafa practitioners in San Francisco in the U.S. She likes the principles of Truthfulness-Compassion-Forbearance. “They are something we need and we do not have,” she explained.

Michel Krieff owns a winery. He said the words Truthfulness-Compassion-Forbearance represent peace and much more. He hopes everyone can follow these principles. “Unfortunately, many people choose to back off—they dare not to speak the truth due to this or that concern,” he added.

“Events like this are very meaningful because they help the public to know what is going on in China. We should all stand against organ harvesting,” he said.

Emanuel Chauveau works close to Place du Châtelet and said he’s seen practitioners’ events before. He had praise for the principles of Truthfulness-Compassion-Forbearance.

“Falun Dafa is a system of inner peace, enlightenment, and wisdom,” he said. “It not only helps us find our conscience but also guides us to returning to our true selves.”

He pointed out that the CCP is known for its totalitarian rule. “Although Falun Dafa practitioners did not do anything wrong, the regime still suppresses them brutally. It also spread lies to deceive police and government officials to mistreat practitioners. That is unacceptable.”

He thanked practitioners for their courage and added, “The CCP is not a normal government. It murders people and destroys culture. The Berlin Wall fell and the Soviet Union was dissolved. The CCP could be the next.”