(Minghui.org) Today's news from China includes incidents of persecution that took place in 13 cities or counties in 6 provinces, where at least 18 practitioners were recently persecuted for their belief. 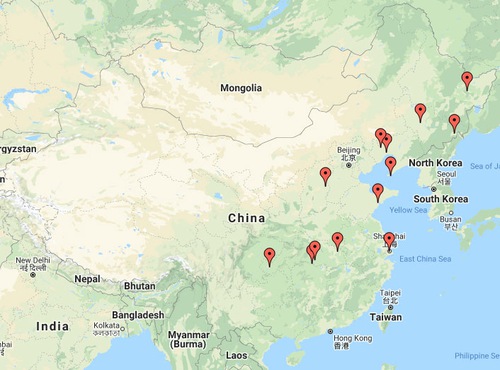 Jiangbei District Court clerk Huang Xiaoxiao contacted Mr. Chen Mingxi by telephone on December 14 and told him to go to the court to collect his summons the following day.

The Jiangbei District Procuratorate prosecuted Mr. Chen Mingxi for “using a (slanderous term deleted) organization to undermine law enforcement.” The court hearing was scheduled for 9:30 a.m. on December 23 in Courtroom No. 2.

After the Yanji City Court put two Korean ethnic minority Falun Gong practitioners Ms. Jin Huixin and Ms. Tai Zhenzi (both around 77 years old) on trial, the court officials operated in secrecy and reported their decisions to the Yanbian Intermediate Court without notifying the practitioners’ families.

The two women are still being held in the Yanji City Detention Center. Further information about their situation is unavailable.

Ms. Zhang Guiying was arrested at home by officers from the Fu’an Police Station in November 2021. The officers ransacked her home and confiscated Falun Dafa books and photos of the founder of Falun Gong. She was held in custody for 20 days. She has returned home.

At around 10 a.m. on December 14, 2021, Chen Yang, political head of the Jiazhuyuan Town Police Station, and six officers arrested Mr. Zhang Guoliang. Chen wanted to place Mr. Zhang in detention. The detention center refused to accept him due to his high blood pressure. Mr. Zhang’s relatives repeatedly asked the officers to release him. It was not until 9 p.m. that he was taken home and put under residential surveillance.

Around 5 p.m. on October 19, 2021, when Ms. Feng Tingting went to pick up her granddaughter at school, she discovered that principal Liu and a female teacher were holding her back. Five men and three women surrounded Ms. Feng until officers from the Jiefang Police Station came and took her to a brainwashing center in Zhanggou Village. Ms. Feng was taken home at 10 p.m. on December 10 after being held there for 53 days.

Ms. Chen Ling from Dehui City was arrested on November 9, 2021. She was taken to Changchun City. Further details are not available.

Ms. Li Guiqin from Baoqing County was arrested at home at around 8 a.m. on December 15, 2021. The police confiscated her Falun Gong books, printed materials, and about 100 yuan in paper bills with information about Falun Gong written on them.

Mr. Lu Kaili will be tried via video link in the No. 2 Courtroom of the Ganjingzi District Court at 3 p.m. on December 16, 2021. Mr. Lu will attend the trial in the detention center and his lawyer will be in the courtroom.

The lawyer met with Mr. Lu before. Mr. Lu was unable to walk normally and was in a wheelchair. He was in poor physical condition, suffered severe leg pain, and was unable to sleep at night. He also suffered from incontinence.

Ms. Wang Suping has been held in the Yangquan Brainwashing Center for over a month.

Mr. Wang, 89, from Yulan No.1 Village, Anting Town, the Jiading District, was arrested and taken to the Anting Police Station on December 9, 2021, for talking to people about Falun Gong. The officers ransacked his home and confiscated his Falun Gong books and lectures given by Falun Gong’s founder.

In the police station, the officers interrogated him and threatened that if this happened again, his son would lose his job. Half an hour later, Mr. Wang was released.

Officers from the Jianping County Domestic Security Division and the Kuidesu Township Police Station went to arrest two Falun Gong practitioners on November 16, 2021, but were unsuccessful.

At 10 a.m. on November 18, they arrested Ms. Feng Ruiying and ransacked her home. The Jianping County Police Department filed a case with the Jianping County Procuratorate. Ms. Feng was officially placed under arrest on December 3. She is being held in the Chaoyang City Detention Center.

Ms. Xu Qingfang was arrested on December 12, 2021. When her daughter Ms. Meng Tao and nephew Mr. Xu Chi, both non-practitioners, went to the Daxue Police Station to request her release, they were arrested and placed in criminal detention. It is not clear where they are being held.

Ms. Song, in her 70s, from the Nanshan area was arrested by officers from the Taihe Domestic Security Division in early November 2021 for calling people to tell them about Falun Gong. She is being held in a detention center.

Officers from the Taihe Domestic Security Division went to the home of 82-year-old Sun (gender unknown) on October 20, 2021. They wanted to arrest Sun, who clarified the truth to them. Instead of arresting Sun, they confiscated Falun Gong books and photos of the founder of Falun Gong.

Mao Tao, head of the Macheng City State Security Division, led a team of police officers to Ms. Zou Guixiang’s home around 7 p.m. on December 10, 2021. They pretended they were there to install “anti-fraud Apps.” When they got in, they ransacked the place. Gaochun District police from Nanjing City, Jiangsu Province, arrested Ms. Zou. That night, the Nanjing police took her back to Nanjing and held her custody. They confiscated her Falun Gong books, photos of the founder of Falun Gong, several cell phones, and 7000 yuan in paper bills with information about Falun Gong written on them.

When the officers were ransacking Ms. Zou’s home, Ms. Bai Lihua knocked on the door and was taken away for interrogation. Ms. Bai went home that night.

Ms. Zhou Ailing was reported to the police around 3:30 p.m. on December 12, 2021, for distributing Falun Gong materials. Security guards at the Hengtai Mingshi Estate intercepted her. The local police arrested her and took her to the Macheng City Detention Center.