Adherents outside China have previously submitted lists of perpetrators to various governments requesting that sanctions be imposed on the named human rights violators. The latest submission marks the first time that Estonia has participated in this effort. 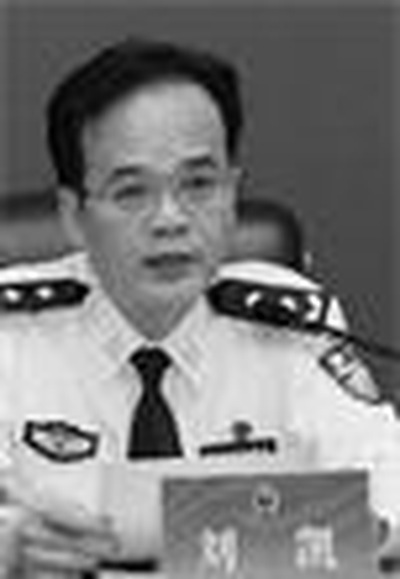 The Domestic Security Office is also known as the First Bureau of the Ministry of Public Security. Its predecessor was the Political Security Department of the Public Security Bureau. It is an organization that specifically carries out the instructions of former Chinese Communist Party (CCP) leader Jiang Zemin to persecute Falun Gong. In the past two decades, the Domestic Security Office has been responsible for the persecution and coercion of local police to persecute Falun Gong practitioners, including harassing and arresting practitioners, ransacking their homes, and torturing them.

Liu Kai started his career in the Shanghai political and legal system. He was promoted up the Party ladder by Wu Zhiming, former secretary of the Shanghai Political and Legal Affairs Committee. Wu is Jiang Zemin’s nephew and is in charge of the persecution of Falun Gong by the public security system in Shanghai.

During Liu Kai’s tenure in Shanghai, he followed Wu Zhiming’s orders and was his accomplice in actively persecuting Falun Gong. From the beginning of the persecution in 1999 to 2005, he served as an assistant to the Director of the Domestic Security Office, Director of the Command Office, Director of the Research Office, and Deputy Director in Command. According to information collected by Minghui.org, at least 12 Falun Gong practitioners were tortured to death during his tenure, including Lu Xingguo, Li Weihong, Yang Xueqin, Ma Xinxing, Li Jianbin, Li Baifan, Li Limao, Cao Jinxian, Huang Qiaolan, Ge Wenxin, Chen Jun, and Ding Youmu.

One follower of the discipline, Mr. Ma Xinxing, was in his 40s. In late 1999, police from the Xuhui district locked Mr. Ma in a psychiatric hospital for over three months and administered nerve-damaging drugs. In late 2000, Mr. Ma was taken to the Qingpu Third Forced Labor Camp. In November 2003, as Mr. Ma was on the brink of death because of the torture he was subjected to, the police, wanting to avoid responsibility if he died, told his family to take him home. Mr. Ma died on December 14, 2003.

In August 2016, during Liu Kai’s tenure as Deputy Director of the Ningbo Public Security Bureau, the Ningbo 610 Office used the G20 summit as an excuse to launch a joint operation with the public security system and the subordinate 610 Office in the Yinzhou District, to start a brainwashing class at Xiongfeng Mountain Villa in Ninghai County. On August 26, eight Falun Gong practitioners, including Hong Jijing, Ying Guofang, Jiang Chunya, and Niu Zixia, were taken there.

Since March 2017, Liu Kai has served as Director and Secretary of the Hebei Provincial Public Security Department, Deputy Governor of Hebei Province, and Member of the Political and Legal Committee. He continues to follow Jiang Zemin’s instructions in overseeing public security officers persecuting Falun Gong practitioners.

There have been many large-scale arrests of Falun Gong adherents in various cities in Hebei Province in recent years that were directly tied to Liu Kai. For example, in the second half of 2017, 2,092 Falun Gong practitioners were harassed in Hebei Province, the highest number compared to other regions. Since then, Hebei has remained either the number one or number two province in the country targeting practitioners for their faith.

In 2018, Falun Gong practitioners from 11 regions of Hebei Province were persecuted. Among them, 2 died, 326 were arrested, 180 were detained, 1,075 were harassed, and 41 had their homes ransacked.

In 2019, at least 10 Falun Gong practitioners from Hebei Province died in the persecution, 544 were arrested, 234 were harassed, and 289 had their homes ransacked.

In 2020, also 10 Falun Gong practitioners in Hebei Province died in the persecution, at least 683 people were arrested and 1,690 harassed.

Numerous Falun Gong practitioners were arrested in the name of the “government’s special task force to eradicate criminal gangs.”

From July to August 2018, under the instruction of the Laishui Government, the Political and Legal Committee, the Stability Maintenance Office, and the Public Security Bureau of Laishui County, Hebei Province, agents ransacked the homes of 550 Falun Gong practitioners from 284 villages in 15 townships. They took pictures, video recordings, and collected practitioners’ personal information.

According to information compiled by Minghui.org, authorities in Hebei Province launched a 100-day campaign to target practitioners who refused to renounce their faith in Falun Gong. A special task force was set up by the Hebei Province Public Security Bureau to carry out the campaign, which lasted from April 5 to July 15, 2019. The task force was headquartered in a hotel in Laishui County. Li Hongyu, former head of the Laishui County 610 Office, lead the task force.

The Public Security Bureau and police station in the Fengrun District, Tangshan City dispatched a group of officers to break into 38 Falun Gong practitioners’ homes around 4 a.m. on June 18, 2020. They harassed, intimidated, and arrested people. Ms. Han Yuqin, 68, died in the police station hours after being arrested. Another five practitioners were sentenced to prison on October 15, 2021, ranging from 17 months to eight years.

Starting in June 2020, the Qianxi County’s Political and Legal Affairs Committee compiled a list of more than 150 practitioners, including those in their 80s, and set a deadline for the authorities to force them to renounce their belief. They searched the practitioners’ homes and threatened them with the loss of their jobs, pensions, and that of their children, even their education, in order to force the practitioners to sign a declaration renouncing their faith.

In nearby Baoding City, at least 150 practitioners had been harassed by mid-September. Another 40 plus practitioners were harassed in Taocheng District, Hengshui City. The district established a “one person, one file” rule for each Falun Gong practitioner, and formulated a transformation plan. The practitioners who did not agree to “transform” received threats of detention and re-education (brainwashing sessions).

In the early hours of August 12, around 100 police officers were dispatched in Tangshan City’s Fengnan District to arrest more than 10 Falun Gong practitioners and ransack their homes. Among them, Mr. Dong Jianquan was persecuted to death on October 25, 2020, and six practitioners were sentenced to between six months and 10 years in prison.

As Director and Deputy Governor of the Public Security Department of Hebei Province, Liu Kai bears a direct and unavoidable responsibility for the persecution of Falun Gong practitioners in Hebei Province.

Ms. Ma Guilan was arrested on July 4, 2018, and held in a detention facility for two weeks before being transferred to the Qinhuangdao City Detention Center. There, authorities tried to force her to renounce Falun Gong. When she refused, they poured spicy water on her face. Ms. Ma started a hunger strike around September 11 to protest her detention. Guards began force-feeding her three days later. Her cellmates heard her frightening screams during the force-feeding.

On September 16, guards force-fed her for the third time. By 7 a.m. on September 17, Ms. Ma was barely conscious and unable to get up from her bed. Two cellmates helped her sit up. They noticed that her hands and feet were very cold. Her cellmates put her back into bed. By then, her eyes and mouth were wide open – she was unconscious.

Ms. Ma was taken to the Qinhuangdao Police Hospital and died about an hour later. Several officials from a provincial government agency came and removed her organs for some alleged examinations. It’s not clear what organs were removed or where they took them.

Ms. Kong Hongyun, 47, was arrested by Hepingli Police Station officers on January 2, 2019, and held in Baoding City Detention Center. She was taken to a hospital by detention center staff on March 8. The doctor recommended that she be hospitalized, but the detention center refused.

On the evening of March 10, Ms. Kong fell into a coma. Detention center staff took her to the hospital again, where a specialist wrote up a death notification and performed a tracheotomy on her. After the operation, her life was maintained on a ventilator. Later, the doctor urged the police to notify her family about her condition. Her family rushed to the hospital at around 8 a.m. on June 12, only to find that she had already died.

Mr. Wei was tortured to death in Qinhuangdao Detention Center on the evening of November 23, 2019. His family rushed to the Qinhuangdao City People’s Hospital, and saw that his eyes were half-closed and his right arm was purple and black with severe bruising.

A group of officers from Fengrun District’s Duanminglu Police Station broke into Ms. Han Yuqin’s home on June 18, 2020. They took her to the police station, forced her to sit on a metal chair, and ordered her to fill out a form renouncing Falun Gong. She refused to comply.

Ms. Han’s legs became swollen as a result of sitting for hours in the chair. She went to the restroom around 4 p.m. as officers waited outside the door. When she didn’t come out, they entered and found her collapsed on the floor. She was taken to hospital where she was pronounced dead shortly after.

Ms. Han’s family was informed of her death around 6 p.m. When they saw her in the hospital, her hair was mussed up and there was blood in her nose. She was 68.

Ms. Ma Huixin was arrested by Yaocheng Police Station officers in Anguo City on June 13, 2020. She was taken to Baoding Detention Center the next afternoon by Chen Yanqing, deputy head of the Domestic Security Office. Ms. Ma was in good health.

On November 7, the detention center informed Ms. Ma’s family that she was in critical condition after suffering a stroke. Ms. Ma underwent a craniotomy on November 10 and was treated in the intensive care unit for two weeks. She was removed from the hospital and taken to an assisted living facility for seniors without her family’s consent on November 30.

Mr. Li Yanchun and his wife, Ms. Pei Yuxian, were arrested on November 25, 2018, after being reported for handing out calendars containing information about Falun Gong. They were handcuffed and shackled while being interrogated. The officers later took the couple to their home and ransacked the place. When Mr. Li resisted, officers slapped him in the face, causing his mouth to bleed. They forced him to kneel with his hands cuffed behind his back.

After 20 hours of detention, Mr. Li was released on bail due to high blood pressure. Ms. Pei was taken to the Qinhuangdao City Detention Center.