(Minghui.org) An undersea volcano off Tonga erupted on the evening of January 14, 2022, triggering tsunami warnings in several South Pacific islands, including the Japanese archipelago.

One of Largest Volcano Eruptions in Tonga in Decades

An underwater volcano near the sea off the South Pacific Island kingdom of Tonga erupted twice, triggering tsunamis on January 14 and 15, 2022 at around 5:00 p.m. The country’s capital, Nuku’alofa, and other cities were blanketed in volcanic ash. Power was out across the country, and telephone communications and domestic services were cut off.

The massive eruption of the volcano, known as Hunga Tonga-Hunga Haapai, was located about 65 kilometers north of Nuku’alofa. 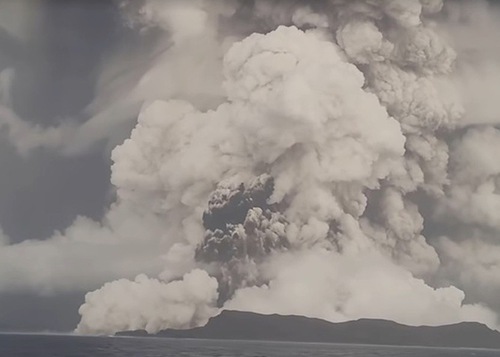 Tonga volcano eruption (from the Internet)

The volcano erupted for the first time on Friday (January 14), with a second eruption at 5:26 p.m. local time on Saturday, Radio New Zealand (RNZ) reported.

The second eruption lasted at least eight minutes, and a thunder-like loud noise was also heard in Fiji, 800 kilometers away.

Waves crossed the coastline of Nuku’alofa and flowed to coastal roads, inundating houses on January 15. King Tupou VI of Tonga was evacuated from the palace and the people fled to higher grounds.

Satellite images showed a huge cloud of ash and shock waves that spread along with the eruption. The Tonga Geological Service said that gas, smoke and ash were spewed from the volcano up to 20 kilometers (12.4 miles) away.

At the time of writing, the Australia Bureau of Meteorology maintained a marine threat warning for parts of Queensland, New South Wales, Victoria and Tas.

New Zealand’s National Emergency Management Agency, 2,300 km from Tonga, found that unusual, powerful and unpredictable sea swells were off the north and east coast of the country’s North Island.

Shane Cronin, a volcano expert at the University of Auckland in New Zealand, told the BBC that he believed the eruption is the largest in Tonga in the past three decades. “The most remarkable thing about it is how rapidly and violently it's spread.” “It’s one of the more significant eruptions of the last decade at least,” he commented.

A 1.2-meter tsunami occurred at 11:55 p.m. local time on Saturday, January 15 in Kagoshima, Japan, and a 3-meter-high wave appeared along the coast. The Japan Meteorological Agency issued a tsunami warning for some coastal areas on the early morning of January 16.

The Japan Meteorological Agency also warned of repeated arrivals of tsunamis and urged local residents to stay in safe areas until the warning was lifted. As of 4:00 a.m. on January 16, no official reports of casualties had been received.