Taiwan: Practitioners Learn from Each Other and Reflect on Their Cultivation Experiences During Conference

(Minghui.org) Falun Dafa practitioners from Taoyuan, Hsinchu, Miaoli and other places in Taiwan held a conference on January 9, 2022. They discussed their experiences while clarifying the truth. They hoped to learn from each other, cultivate themselves well, and save more people. 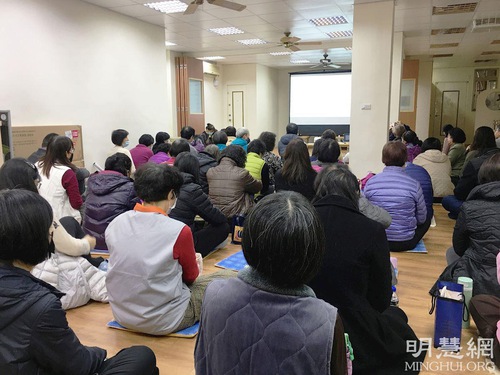 Practitioners from Taoyuan, Hsinchu, Miaoli, and other places in Taiwan held an experience sharing conference on January 9.

Chin Lian has been clarifying the truth through the Internet for more than ten years. After she joined the phone team to call people in China she had new cultivation opportunities, including difficulties in her family environment.

Her family owns a car repair shop. She helps out by taking care of the shop. When her husband repairs cars, he sometimes makes loud noises. Her two granddaughters also run and play around inside the shop. Chin Lian overcomes many challenges like these while she participates in clarifying the truth.

One day while her husband was repairing a car, a pump made a loud noise. She was afraid that the person on the other end of the phone call would not hear clearly so she spoke louder. The man quietly listened and then told Chin Lian that he was a member of the Chinese Communist Party (CCP). He agreed to quit the CCP and then asked, “Didn’t you know that I am in a Party meeting? Why did you call me at this time?” Chin Lian said, “For your peace of mind.” The man thanked her.

Another time, a member of the CCP said he was very busy as soon as he answered the phone and kept telling Chin Lian to hurry up. She said, “You keep urging me to hurry and it makes me nervous.”

The man said, “Don’t be nervous. Just hurry and tell me.” When Chin Lian finished, the man said happily, “I’m a Party member. Please help me quit the CCP.”

Using Compassion to Deal with Difficulties

Another person who answered Chin Lian’s phone call said, “I’m a senior Party member. I want to quit the Party.” When Chin Lian finished helping him quit, he sent her a message on WeChat saying, “I lied. I’m not a Party member.”

Chin Lian called him back and said, “Since the CCP took power in China, 80 million people have been persecuted to death. The CCP even conducts organ harvesting from living Falun Dafa practitioners for profit. It has committed countless crimes. If people don’t quit the Party, they will be held accountable for it’s crimes. When earthquakes, floods, and plagues come, why are some people safe but others die? Because good people are protected by divine beings.”

“I tell you this information because I wish you to stay away from disasters, for a safe future. You deceived me as well as the divine beings today. Can they protect you? Will you be safe?” The man said he did wrong and apologized.

Chin Lian asked him again if he had joined the CCP. He said he was a member of the Communist Young Pioneers. She helped him quit his membership. He thanked her and said he appreciated her help.

Seventy-two year-old Baoyu had never used a computer and could not read English letters at all before she joined the effort to clarify the truth online. She was touched by their patient guidance as practitioners on the platform encouraged her to break through her notions and learn how to use a computer. They patiently helped her, and she was eventually able to use one herself. She also persuaded many people in China to quit their memberships in the CCP and its organizations.

Baoyu mentioned that the key was that she slept less, studied the Fa diligently, memorized the Fa to purify herself, and maintained her xinxing, so her advising people to quit the CCP went smoothly.

Mei Lin talked about removing her impatience in clarifying the truth. Accepting suggestions from fellow practitioners, she posted the three words “slow, gradual, and round” on her table, reminding herself to clarify the truth with patience. She said this was also to remind herself to let go of ego and cooperate with fellow practitioners unconditionally.

She recently enlightened that her cultivation state and whether she improved her xinxing is reflected in how effective she is in clarifying the truth. When her state is not good, few people wish to quit the CCP. If some phone call recipients do not agree to quit the CCP and its organizations, Mei Lin said she immediately realizes that it is due to her own shortcomings. She actively corrects herself based on the Fa, and looks for her thoughts that do not conform to the Fa. In the process of clarifying the truth, she also improved herself.

When discussing her recent cultivation experiences Pei Fen said, “I teach Vietnamese practitioners to improve their Chinese language skills, so that more practitioners can directly clarify the truth. On the surface I am making a sacrifice, but in fact, they are helping me to improve my cultivation and fulfill my vow to save people.”

Pei Fen said that her work was not going well a while ago, and her salary was cut in half. She was worried and thought about changing jobs. However, she thought her schedule might then change and she would have less time to clarify the truth. She decided to work harder at her job.

Pei Fen said to Master in her mind, “Please help me so that I have the conditions to clarify the truth.” Her mother’s nursing home fee was soon reduced from more than 20,000 yuan to only over 3,000 yuan per month, which greatly lessened Pei Fen’s financial burden.

She began thinking about opening a kindergarten so she could make more money. One day the nurse who took care of her mother called and said, “Your mother may need to be hospitalized. We are observing her. The hospital is full and she is waiting for a hospital bed.”

Pei Fen immediately looked within and thought to herself, “Why is my mother like this all of a sudden? Master arranged my environment so I can save people, not to make money. I must correct myself and be diligent!” She focused on saving people and doing what practitioners should do. A few days later the nurse told her, “Your mother’s condition is stable now. No need to be hospitalized.”

Pei Fen made phone calls with a Vietnamese practitioner in an online group chat. They took turns making calls. That night, Pei Fen advised three people to quit the CCP and its organizations.

As soon as the Vietnamese practitioner started speaking, the recipient said with contempt, “Your Mandarin is very poor. I don’t understand what you are saying.” He hung up the phone.

After being hung up on several times in a row, the Vietnamese practitioners did not get discouraged, but continued to make calls. After a week or two, they were able to advise more and more people to quit their memberships in the CCP and its organizations.