Taiwan: Falun Dafa Practitioners Encourage Each Other to Cultivate Diligently in the New Year

(Minghui.org) The Taipei Falun Dafa Assistance Center organized a group reading of the Falun Dafa teachings at the New Taipei City Banqiao District office on January 9, 2022. They meet every two weeks and this was the first time the meeting was held in this spacious, bright hall. 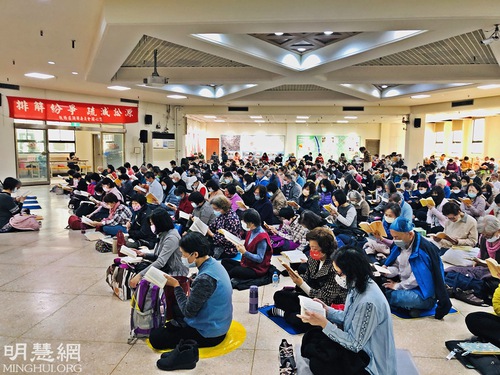 Practitioners came together to read the Falun Dafa teachings at the New Taipei City Banqiao District office on January 9, 2022.

Afterwards they shared understandings on practicing cultivation and their experiences in telling people about the ongoing persecution in China.

Chen Huizhen, who has been practicing for over four years, talked about the insights she had after attending the 2021 experience sharing conference in Taiwan. She said she was moved by practitioners’ sharing and felt she was just going through formalities in the past instead of truly cultivating. She now realizes that if she is not diligent, she is letting Master down and that studying the Fa well is the basis of everything.

Mei Qing, who works at the NTD TV station, talked about her understanding of the principle “no loss, no gain,” that Master talked about in Zhuan Falun. When she was moving, she got angry when some of her belongings were misplaced by the company she’d hired. She was so upset that she could not sleep. Then she remembered what Master said about “no loss, no gain” and that everything happens for a reason. She felt perhaps it was a debt she owed from wrongdoings in the past and she was able to let go of her anger.

Yong Shou, another practitioner, said, “While reading ‘Rationality’ in Essentials for Further Advancement II, I suddenly discovered I had been going to extremes in handling relationships with fellow practitioners and family members even though I’ve practiced cultivation for many years.” He came to the understanding that if he does not have negative thoughts about others or go to extremes, he will be able to guide his children on the right path and be effective at clarifying the truth.

Several practitioners shared their experiences of memorizing the Fa. One young man said, “I admire the elderly practitioners who are able to memorize Zhuan Falun cover to cover. They don’t need to look at the book during group Fa study. I don’t think I can do that. I later recalled what Master said, ‘When it’s difficult to endure, you can endure it. When it’s impossible to do, you can do it.’ (Zhuan Falun) I also began to learn the Fa by heart. I discovered that life is filled with joy when the teachings of the Fa are always in my mind.”Another practitioner said, “When we see other practitioners doing well in projects validating the Fa, don’t praise them too much, because their achievement came from Master. If we think they are better than the Fa, the old forces might take advantage of our gaps and this will lead to losses.”

The attendees were enthusiastic about sharing their experiences in making efforts to improve in cultivation, and some said they felt a strong energy field. They all look forward to their next meeting in two weeks.