(Minghui.org) An elementary school in Taiwan hosted a Thanksgiving event. The head teacher, Ms. Wang Yuqing, handed out cards and asked each student write down what they were grateful for. Surprisingly, many of the students wrote that they were grateful to their teacher for introducing them to Falun Dafa and educating them with the principles of Truthfulness-Compassion-Forbearance. 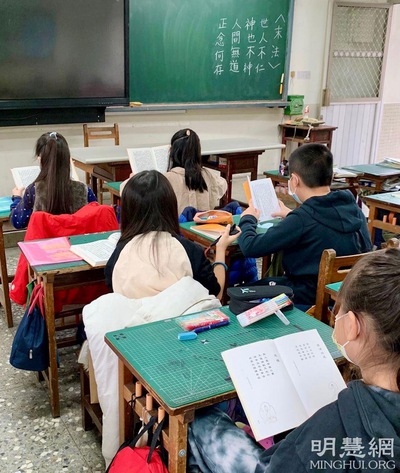 Being Grateful for the Principles of Truthfulness-Compassion-Forbearance

Wen wrote, “Thank you, Ms. Wang, for teaching us about Falun Dafa’s principles of Truthfulness-Compassion-Forbearance. We have learned to become better people, to refrain from fighting back and we also kindly remind our classmates when they behave inappropriately. I am grateful to Ms. Wang for letting us practice the fifth meditation exercise during the afternoons. Not only are we able to calm our hearts and transform our black substance, karma, into the white substance, virtue, we also have become more healthy and fit.”

Zhen wrote, “I am grateful to Ms. Wang for nurturing us. I also learned the principles of Truthfulness-Compassion-Forbearance. These principles have taught me how to upgrade my xinxing and cultivation level.

Cheng wrote, “I am grateful that Ms. Wang taught us about Falun Dafa’s principles of Truthfulness-Compassion-Forbearance. I did many bad things in the past and Ms. Wang has helped me turn around. Thank you, Ms. Wang, for letting us read Master’s lectures, read Hong Yin, practice the Falun Dafa exercises and purify our bodies. We have all come together because of our predestined relationship.”

Yu wrote, “I am grateful to Ms. Wang for teaching us wholeheartedly every day. Not only do you correct our homework, you also teach us how to abide by the principles of Truthfulness-Compassion-Forbearance and recite the nine special words ‘Falun Dafa is good. Truthfulness-Compassion-Forbearance is good.’ I am extremely grateful for your guidance.”

Though a boy named Wang was the only student who declined to practice the exercises and study the Fa, he also wrote that he was grateful for Truthfulness-Compassion-Forbearance.

Ms. Wang was very touched by her students’ gratitude. She said, “You need not thank me, you should thank Master Li Hongzhi, the founder of Falun Dafa. I obtained the Fa a bit earlier than you and perhaps we had agreed to cultivate back to our true origins together!”

By studying and memorizing the Fa every day, some students developed an interest in Falun Dafa and decided to take the book Zhuan Falun home. Ms. Wang also gave these students a copies of a Truthfulness-Compassion-Forbearance Special Edition and a Minghui Window Special Edition, to help them gain a better understanding of Dafa. To Ms. Wang’s surprise, many other students were also interested in the special editions, so she placed two copies of the special editions in the classroom so students could access them during their break times.

An said, “After reciting “Falun Dafa is good. Truthfulness-Compassion-Forbearance is good,” my fever went down and I was able to sleep.”

Zhen said, “I was tested three times after having blood in my urine and the doctor said that I might have kidney problems. I was very worried and kept reciting “Falun Dafa is good. Truthfulness-Compassion-Forbearance is good.” When I returned to be tested for the fourth time, the doctor said I was fine! This was indeed a miracle!”

After personally experiencing his health problems disappear after reciting the special phrase, Zhen said, “Ms. Wang, do you know what I want to be when I grow up? My dream is to become a scientist. I want to research how reciting “Falun Dafa is good. Truthfulness-Compassion-Forbearance is good” can be beneficial to one’s physical health!”

The phrase seemed to have taken root deep within the students’ hearts, bringing hope and light into their lives.

Students’ Understanding About Virtue and Karma

Hao realized that his Lego pieces were missing and he was quite sure that someone had taken them from him. He was very upset and told Ms. Wang, “Teacher, can you help me find my lost Lego pieces? I hope whoever took them can return them to me.”

Ms. Wang told the whole class, “Hao is very upset that his Lego pieces are missing. He is not angry but hopes that whoever took them can return them. If Hao did something that made you unhappy, you can tell him and he will correct his behavior. However, taking things away from your classmates is wrong and you will lose virtue, or white substance. Legos can be bought with money, but virtue is very priceless. Virtue cannot be bought with any amount of money.”

Though Hao's Lego pieces were still missing, he was able to take the matter more lightly. He said to Ms. Wang, “Teacher, it’s okay if I don’t get my Legos back. Whoever took my Legos has already accrued karma and has given me virtue.”

Wen is an adorable child who is well-liked by everyone. She would often run out to play without completing the work that needed to be done. After studying Dafa, Wen became hardworking and started to do all her tasks well. She also stepped up to fulfill the responsibilities of others. She learned to tolerate and forgive her classmates’ pranks.

A male classmate threw Wen’s pencil in the trash one day and her friends reported the boy to the teacher. When the teacher came over, the boy became very anxious. The teacher asked Wen what had happened. Wen paused for a moment and then said, “Nothing happened.” The male student was very ashamed of his actions and apologized to Wen. The teacher was very touched by Wen’s tolerance and forgiveness.

The teacher discussed this incident with the class and asked the students, “Why do you think Wen remained silent and chose not to tell the teacher when she was being bullied?” Many students raised their hands and replied, “This was because she was abiding by the principles of Truthfulness-Compassion-Forbearance.” “She already obtained the virtue.”

Tian was a child who needed special help. He threw temper tantrums and was unreasonable at times. After cultivating Falun Dafa, Tian became more sincere, compassionate and more considerate of others. He became more polite and also learned to look inward.

He asked Ms. Wang every day, “Did I abide by the principles of Truthfulness-Compassion-Forbearance today?” Instead of replying directly, Ms. Wang would ask him if he abided by those principles. Tian would shake his head and say no. Ms. Wang suggested that he look inward to find his own shortcomings. Tian said, “I did not hand in my homework in the morning and became very angry. I will hand in my homework voluntarily next time.”

Tian started to sincerely look inward every day to correct his behavior. One day he happily told Ms. Wang, “I can go on a trip with my tutoring class this winter break!” Ms. Wang asked, “Why couldn’t you go before?” Xiao Tian smiled and replied, “I did not behave well in the past and the tutors did not let me attend these trips. However, after becoming more obedient, my tutors said I could go.”

While reciting the poem “Tempering The Will” from Hong Yin one day, Tian raised his hand and said, “According to my current level of understanding, I think this poem means that after one consummates, one is able to reach Buddhahood. One should find joy in suffering. Physical pain counts very little as suffering and the hardships in the mind are the toughest to endure. There are many tribulations that one needs to overcome in life.” While Tian explained his understanding of the poem with a sincere heart, Ms. Wang felt very happy that a troubled child had turned himself around.

The students handwrite poems from Hong Yin every day. Though Tang has some learning disabilities, she would still handwrite the poems with a sincere heart. She does the double lotus position while reading Hong Yin. Her sincerity touched Ms. Wang's heart.

The school assessed the students with special needs and Tang became very nervous because she was afraid the she might not do well. She was so anxious that she had trouble falling asleep at night. Ms. Wang reassured her and said, “As long as you’ve tried your best, that’s all that matters.”

The whole class applauded for Tang. Some students were wondering how Tang passed the assessment this time, so Ms. Wang stated that it was the blessings Tang had received from handwriting poems in Hong Yin with a sincere heart. Most importantly, Tang never pursued anything and accomplished her tasks as a student with a pure heart.